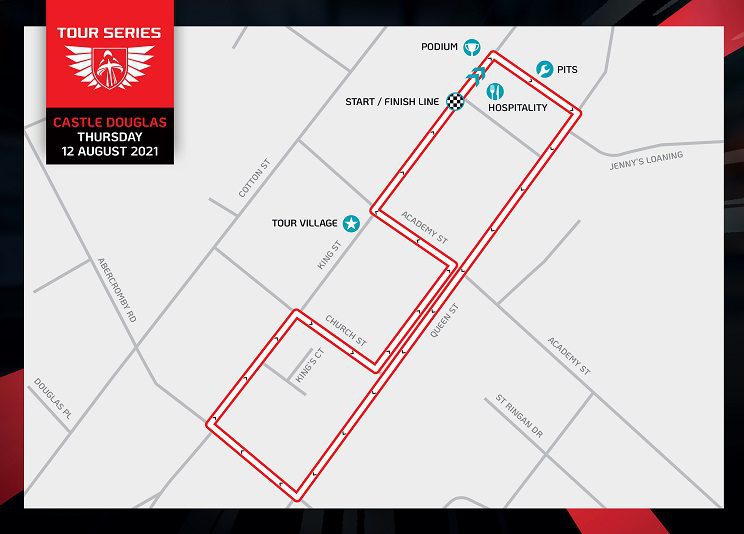 The three new circuits on which the 2021 Tour Series will play out this August have today been revealed.

Having been postponed in 2020 owing to the COVID-19 pandemic, this year’s series will feature men’s and women’s races in Guisborough (Sunday 8 August), Sunderland (Tuesday 10 August) and Castle Douglas (Thursday 12 August).

The circuits will provide a range of tests for Britain’s best domestic riders; from the classic, flat-out nature of the city centre course in Sunderland to the twisting run through Guisborough and Castle Douglas’ blend of long straights and tight 90° turns.

Mick Bennett, Tour Series race director, said: “That we have three completely new rounds to the series in 2021 only adds to my excitement level going into this year’s event. Without any historical races in Guisborough, Sunderland and Castle Douglas to base our opinions on, let alone any Brother UK Fastest Laps to use as a barometer, it feels like both the men’s and women’s titles could be won by a handful of teams.”

To lessen the risk of COVID-19 infection spread, attendees of all three rounds will be encouraged to wear masks in crowded areas, spread out along the route, respect others and to make use of any hand sanitising stations. Spectators are also encouraged to take a lateral flow test in advance of attending the event and only attend if negative.

The series’ opening round in Guisborough features a 1.3-kilometre (800-metre) course set around a section of historic market town. The start/finish line on Westgate will be known to many riders, as it is where the East Cleveland Klondike GP one-day race also begins and ends. A fast start to the lap will take the peloton onto Church Street – and past Gisborough Priory – before a sweeping run through Priory Close.

Expect the battle for position to heat up on Reid Terrace and Westgate Road throughout, but especially on the final lap, as riders seek to be best placed for the 150-metre run to the finish line.

Councillor Louise Westbury, with responsibility for Events and Culture at Redcar & Cleveland Borough Council, said: “The countdown to the Guisborough leg of the Tour Series is now on and it is going to be an incredible day out. So much time and effort has gone into making this a brilliant event for spectators as well as competitors, so we ask that everyone comes along, has a fantastic time and keeps themselves and others as safe as possible in the process by following the guidelines suggested. Please do not attend if you’re experiencing any COVID-19 symptoms and, ideally, protect yourself and others by being double vaccinated.”

Racing in Sunderland – round two host on Tuesday 10 August – will be fast and aggressive owing to the city’s four-corner circuit based around the stunning Mowbray Park. Starting and finishing in the shadow of the Jack Crawford statue, a memorial to a local sailing hero, the course takes in Burdon Road, Park Road, Toward Road and Borough Road, as well as passing the city’s Museum and Winter Gardens.

While the 1.3-kilometre (800-metre) circuit is expected to produce the fastest lap times in the 2021 series, the uphill drag on Burdon Road will take its toll during the course of the races and could well be the launchpad for the race-winning move.

Thursday 12 August will see elite men’s and women’s racing on 1.4-kilometre (0.9-mile) circuit based around Market Hill in Castle Douglas as a part of the CD Bike and Food Festival.

The circuit will include Queen Street, St Andrew Street, Church Street and Academy Street providing a range of great viewing opportunities for spectators around the whole circuit during the two elite races.

Tour Series organisers SweetSpot are working with stakeholders in Scotland and Dumfries & Galloway Council to make this a safe event for spectators. As a result, and owing to current COVID-19 guidelines in Scotland, the event will be ticketed (free of charge) and limited to 1,000 spectators in order to allow the event to take place and to mitigate the associated risks. Registrations are now open via Eventbrite here and will be allocated on a first come, first served basis. Children under the age of 12 do not require tickets.

In line with the planned lifting of major COVID-19 restrictions in Scotland on 9 August it may be that capacity limits for the Tour Series event are able to be lifted. Further updates will be available via tourseries.co.uk and social media.

Councillor Adam Wilson, the Council’s Events Champion said, “Summer has well and truly arrived and an evening watching the Tour Series in Castle Douglas is a great way to get out and about again after the many COVID-19 restrictions. The Council has worked with several agencies and community organisations to plan this brilliant event, which can inspire many of us to take up cycling and support our town centres again.”

Extensive race day coverage will be available on the series’ digital platforms, with highlights being broadcast on ITV4 at 7pm the day after each round.