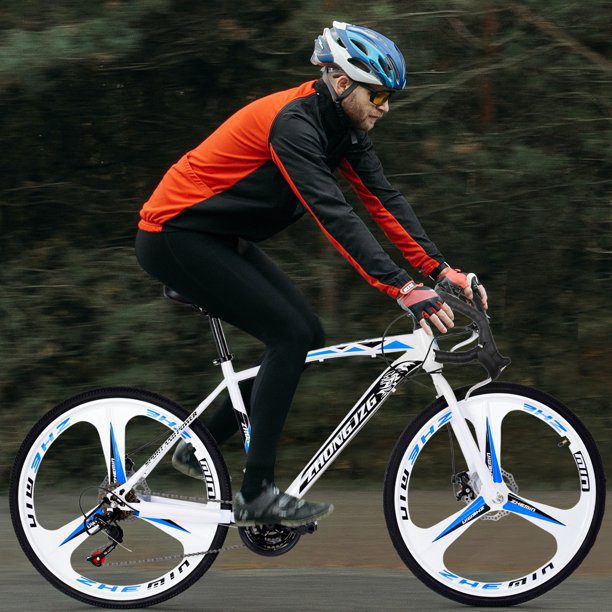 A good thorough name like that inspires confidence. There is one review currently linked to the bike on Walmart, unsurprisingly it’s not good. I’ll be up-front here, I’ve never ridden this bike and certainly don’t plan to. But the listing is just so…ambitious that it deserves a deep delve. I’m going to point out every single little thing that’s wrong with this bike listing.

I will add, this bike is like looking at a painting. Each time you look at it closely, you spot a new and interesting detail that you wonder how you missed before. On that note, it does look like a drawing of a road bike by a kid that somehow came to life.

Have to love the sneaky use of carbon in there. It’s certainly not carbon fibre but lovely cheap, heavy carbon steel. Not even the chromoly steel of decent steel bikes. There’s also some aluminium (the title is American, I’m not) in there – I’m surprised it doesn’t mention the plastic too. There is a claim of a full suspension but it must be very small as I can’t see it in the pictures. Who knows what the anti-slip part refers to? It’d be handy sounding thing for the brakes but it’s often used for handlebar grips, which this bike doesn’t have. It’s just a full load of possible SEO type words, crammed into a title to the point of gibberish. I’m surprised they didn’t include red in the colours as well but we’ll get to that.

The first thing that caught my eye were the handlebars. Whoever has installed them has gone for an extreme Caleb Ewan position. In order to ride with your hands covering the brake levers, you’d pretty much need your chest resting on the bars. On the plus side, you won’t get any moments when you hit a pothole and the bars suddenly loosen and droop down, you’re already prepared! The down-side to riding in this position is that the gear-shifters in the middle of the bars will constantly jab into your chest. It is probably ambitious to have STI shifters at this price level but a road bike with trigger shifters always looks interesting.

If this was an antique restoration project, the bar taping would be politely called ‘naive’. If you’d paid for the taping to be done in a bike shop, you’d be asking for your money back and never using them again. The photo above shows some downright shoddy taping around the bar end plug. However, it’s around the shifter that they really shine. A couple of solid wraps on the hand grip, followed by an attempt to tape around it and get back to the bars. Good luck holding onto the hoods!

The photo below is where things get really fun though. The eagle-eyed will spot that the bar tape has been lovingly wrapped around the brake lever! Something you would never need to check on your own bike when your brakes start to rub. The hood itself has been wrapped again, yet somehow the clamp and bar is still exposed. There’s also the telltale sign of more shoddy work around the silver plug. I am pretty sure that both sides have been wrapped by starting on the tops, rather than at the bar ends.

Staying with the front of the bike the forks look like an optical illusion. Clearly taken out of the cheap parts bin from another type of bike, they’re significantly thinner than the head tube that they’re fed into. They look like they came off the cheapest possible MTB bike, although do have an old school steel frame quality to them too. Despite being disc brake forks, they’ve also been drilled for a front caliper. That might be useful for a future upgrade to double your stopping power. There doesn’t look to be any rake or offset with the forks so the trail looks huge. This will make the steering as responsive as the tanker wedged in the Suez Canal. The single upside of this set-up is there is absolutely zero chance of toe strike.

I wasn’t sure what to call these wheels. Two of the decals on the rim point to them being Zhemin wheels. But then the top-right decal is for a 3hzmin ( or Uiwzhe) for some reason. Luckily the decals on the spokes say Zhemin. Except for the one there that’s also been put on backwards. The rear wheel is the same so it appears to be deliberate. Still, at least car drivers will be able to look in their mirrors and be able to read one of them correctly. I’m not even fully convinced they’re 700c. Plus the sub-par Photoshop selection tool work makes the wheels appear not quite fully round.

Tri-spokes are generally considered quite nice and aerodynamic. Time-triallists will often use a tri-spoke on the front. These Zhemin wheels though will probably end up like the infamous Spinergy wheels which were predisposed to explode at any minute. Punctures will be a doddle to fix, provided you’ve got a spanner handy. No quick-release skewers here! Rigidity will be an issue. Anyone that ever rode a Mobike will know what it’s like to ride cheap tri-spokes. Somehow both forgiving and yet brutal to your spine on potholes. Also a weird sense that the bike is moving sideways underneath you whilst you’re riding.

As for weight limits, take a guess. Now take that guess and divide it in half, just to be sure.

The middle of the bike

There isn’t too much of note in the middle section of the bike. The saddle is on, it’s the correct way round too. Other than being snobby about a triple chainset and a chainring guard, it’s not really all that bad. I can’t quite make out the name on the front derailleur but it doesn’t appear to say Shimano, so another place where money has been saved. Given some of the other issues with the bike, I wonder if the bottle cage holes have just been drilled or will actually take a bolt properly. The only real gripe though is the front derailleur cable, which has been angled 90 degrees outwards without a crimp on the end. Luckily this feature will save you having to buy a cadence sensor, you can just count the amount of times your leg strikes the cable.

The rear of the bike

The extremely long chainstays make the rear wheel sit so far back from the frame. You could probably fit your fist through the gap between the rear wheel and the seat tube. It’s not particularly clear if the chainstay protector is actually holding the rear derailleur housing to the frame. I’m not even fully convinced it is a chainstay protector to be honest. It kinda looks like a bit of polystyrene wrap that hasn’t been removed when the bike came out of the box.

The brake bridge on the seatstays has been drilled 3 times. Presumably to save some weight with a nod to the drillium revival. What bike isn’t complete without an inspirational phrase as well? Seeing SPORT AND POWER will get you through those dark moments. Probably only whilst the bike is propped against the wall at the cafe stop though. Yoga masters will be able to contort themselves whilst riding to get a good view of the energy creating words, you won’t be able to.

What road bike isn’t complete without a kickstand?! No more scratching the precious paintwork on whatever you’ve leaned your bike against. No more just chucking the bike on the floor either! The single review on Walmart says that the kickstand doesn’t really hold the bike up very well though. So maybe avoid using on windy days or just generally avoid using it whenever you think it might be useful.

A genuine, actual Shimano part! The Shimano Tourney TZ rear derailleur could be the most valuable part of the bike. They cost about £14 new and is usually found on hybrids and MTBs. The red jockey wheel comes as standard on the derailleur. That explains the random choice to go for red there on a generally blue/white/black colour palette on the rest of the bike. The derailleur guard is a nice feature, especially when you’ve got to make sure that £14 to replace part never gets broken! You’ll have fun remembering to put it back on when you screw everything back together after a puncture as well. Small miracles though, this cable does have a crimp on the end of it.

I’ve no idea what the black mark is on the far chainstay. It’s on the wrong side for oil from the chain unless someone’s been particularly cack-handed. It’s probably more likely to be a big old paint scratch, which is encouraging given the bike’s not been ridden yet! There’s also a better angled view of the kickstand for aficionados.

This photo is amazing. It’s a rider clearly not riding this bike and I’m not sure hasn’t just been placed onto that background either. The rider is understandably not brave enough to get into the drops but will have some distance to travel when braking. The left hand looks particularly uncomfortable, gripping the vertical bar. The wheels look super tiny when positioned near a human, making them look even less likely to be road standard 700c size. The bike itself looks generally tiny in general and may present an interesting ride experience. The rider’s clipless shoes will come in handy on the bike’s flat pedals.

Remember though, SPORT AND POWER will see him through to the end of the ride.