Book Review: Racing in the Time of Covid: A Review of the Tumultuous 2020 Road Racing Season 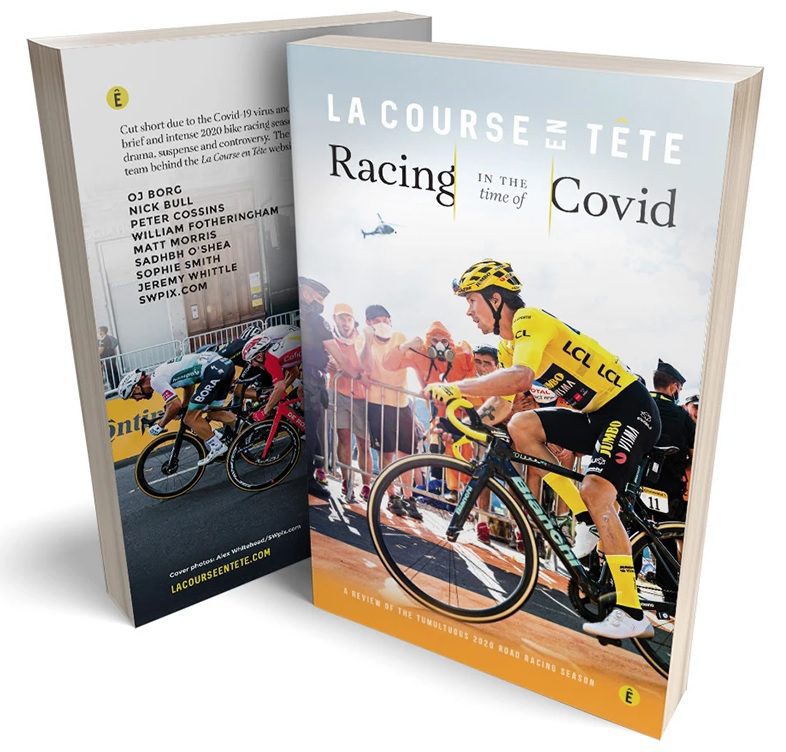 A collection of articles, originally posted on La Course en Tête throughout the 2020 season. The book effectively narrates the 2020 cycling season from start to finish. From the beginning of the year when things were optimistic, to the February/March period of worry as races were cancelled and out the other side into the belated return to racing later in the year.

La Course en Tete is a website which publishes articles from the best of the best of cycling writers. Chances are, if you’ve read a book about any aspect of road cycling then they’ve also had something published on that site. So with decades of cycling experience behind them does this website turned into a book work?

The first 2/3rds of the book runs in chronological order. We get the optimistic start to the season before the madness that happened when COVID took hold. Races were on, then off and then mostly still off again. The articles capture the seat of the pants feel that those few weeks at the start of the European pandemic, where no-one really knew what to do. We see the issues lockdown created and the effects on cyclists watching their season’s fall away out of their control. There’s the worries about racing resuming, from the issues of transmitting the virus to whether it’s morally correct to be racing when so many couldn’t go out. Then we had multiple Grand Tours in a small amount of time, providing lots of material.

With a chronological view of the season complete, there’s a Talking Points chapter which covers some of the controversies of the season. Romain Bardet’s riding whilst concussed is here, so are many of the issues affecting women’s cycling and the issue of racism, representation and diversity in the peloton. All the topics were discussed at length during the season and these articles mean they’re not just consigned to history.

I found the Talking Tactics chapter the best added value in the book. As someone who follows cycling all year, the chronology was a nice reminder of some events in the season. But the detail as to how certain races were won gave me the most cause for thought and the chance to replay some of the races. The diagrams are a great help for those who can’t specifically remember off-hand how individual moments played out.

Probably the only negatives about the book are that the chapter covering the Vuelta comes after the Talking Points and Talking Tactics chapters, disrupting the chronology somewhat. There’s also a higher than average number of typos which jump off the page at me whilst reading! There’s the odd take that I might not necessarily agree with, however the nature of articles like this is there’s plenty of personal opinion. It certainly doesn’t detract from the overall quality.