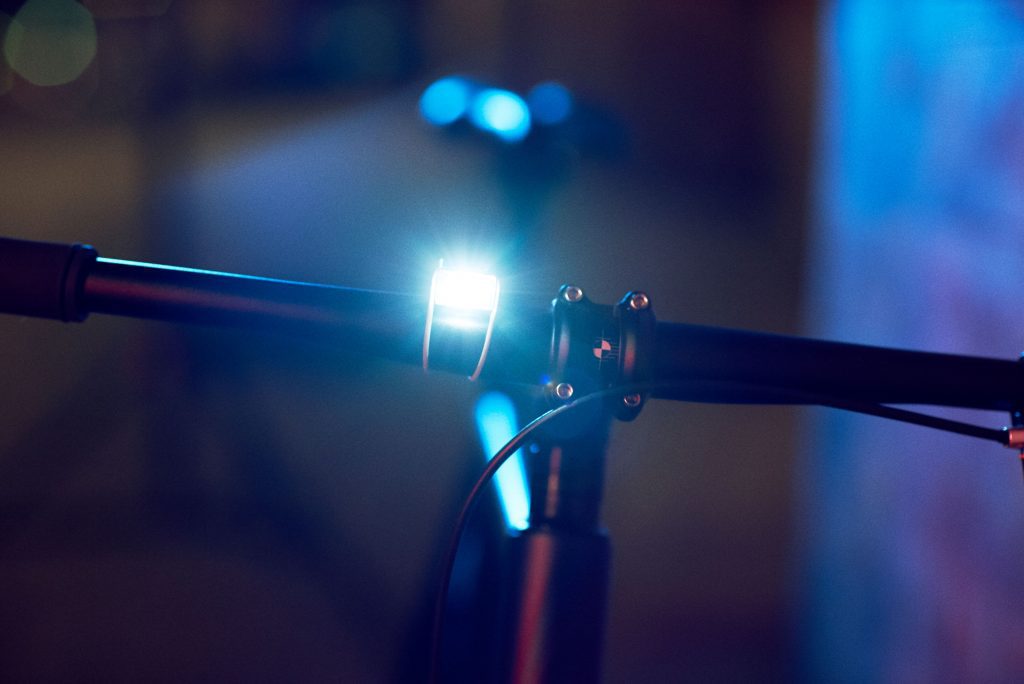 Bookman sent me some lights from Sweden to check out and review. The 3 different lights vary in their uses. So I’ve split the review up into sections. Each section details each of the lights particular strengths and weaknesses.

The first thing I noticed about the Curve Lights was how different they look to my usual Lezyne ones. Not black and less of a block means these lights stick out and seek attention. Scandinavian design meets cycling components.

The first challenge posed was simply to get them onto the aero bars and posts on my bike. I ride a Dolan Rebus these days and the flat carbon aero handlebars stop some lights from attaching. It’s a similar situation at the back where the seat post isn’t a standard round one either. Some lights find it hard to perch on the point of the post. Others work themselves uselessly round to the side.

I was impressed by the easy detach and attach system on the Bookman Curve Lights. A simple lift of a tab and you’ve got a stretchy fluorescent band to work with. It comfortably stretched round both the aero bars and the seat post. Despite the shape of the Curve lending itself to round bars, it was able to cope and stay in position. At no point did it fall away whilst riding. Often that can be a scary moment. As your light suddenly lights up the top of your front wheel and nothing else!

The 100% full-beam option just about works as a main light to see the road ahead. Not as strong as my usual Lezyne 750 but then the Curve isn’t as expensive in fairness. This setting will also burn through the battery quickly. The setting I’ve been using the Curve on most is the 100% Flash setting, which is where its strengths lie. You can see road signs well ahead flashing away before you approach them. It’s also useful as a daytime flash mode too.

The one downside I’ve found is that the top part of the light has some clear plastic. This bit helps visibility from the side. However, it also means you can also see the light flashing brightly in the bottom of your peripheral vision. I found this took away some of my hard-earned night vision.

A nice little touch is the battery status flash when you turn the lights off. Most of the time it’s flashed green for me to tell me there’s plenty of battery life left. When it flashed red, I knew it was definitely time to get them into the house for a charge. Run time is good with 70 hours of front light on its lowest setting and 32 hours for the rear light on its equivalent lowest setting.

Find out where to buy the Bookman Curve at the end of the review.

I once had a set of borderline disposable lights that looked like these. There were about £1 each from PlanetX. They were alright in general. But they were also very much firmly the sort of light you’d stick in a pocket. Just in case you needed to cycle home late from the pub. They’d keep you out of trouble, but you wouldn’t see the road from the front light. The rear one was only slightly better than nothing in the dark.

The first thing I noticed about the Bookman version was that the LED had an extra lens of sorts attached. As a result, I hoped that they’d be brighter without too much of an effect on battery life. On that note, the disposable nature of the cheap ones has been sorted by a USB charger port. These can be invested in and easily kept bright and shining for years to come.

After using them for a bit, I’m particularly pleased with the red rear light. The addition of the lens makes it a great light that can be used as a daytime rear light too. It’s certainly at its best in the actual dark. However, makes a fine 2nd rear light for a commuter too.

That’s pretty much the best role of the white front light as well. Whilst the lens makes it brighter, it’s still not quite good enough to actually see by. What it does do though, is make it a great ‘flasher’. With the main light on solid to see where you’re going, the flashing 2nd light helps grab the attention of drivers coming the opposite way. This light is definitely bright enough to perform this role. As I found out as I accidentally looked directly at it whilst turning it on to test!

I was initially worried about the attachment mechanism. It is pretty much just a rubber band that wraps around bars or seat post. The band then sits in a small groove in the light. I had my doubts that this groove would hold the lights. That they’d probably just ping off on the lumpy British roads. Luckily this didn’t happen to me, so I can report that they’re fine! The rubber band also makes it really easy to take on and take off too. With no need for a permanent attachment to slot the light into.

If you want a set of back-up lights to help you with your commute, that are dead easy to take on and off, these Bookman Block lights would be perfect for you. Especially as you get up to 25 hours of run time for both front and rear lights.

Find out where to buy the Bookman Block at the end of the review!

The Eclipse is the sort of light that I expect runners to wear. Although it will also clip onto a rear jersey pocket for a cyclist. I gave it to a runner to try for a bit. I can report that they weren’t run over, so presumably, it works well!

The light is a little circular disc. It has a clip to attach to clothing and possibly a helmet with the right straps available. With both white and red light settings, it can be used on the front or back too. The 60 hours of runtime is a huge amount for a light this compact.

There have been a few studies that suggest having another higher up light increases visibility for other road users. So these can definitely help out in that way. Despite the limited personal appeal to me personally, the versatility of this light makes it a useful one to have. Particularly for those who do multiple sports.

The rear Curve Light is on Amazon. It looks like you can get it next day with Prime if really need a light quickly too.

The full front and back Curve Light set is available with more colour options directly from Bookman – here.

The set of Bookman Block Lights is available directly from Bookman – here.

The Bookman Eclipse Light is available directly from Bookman – here.