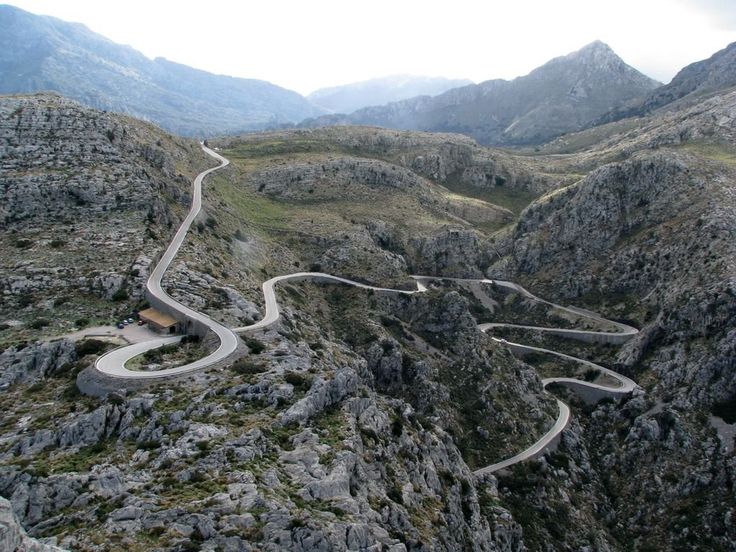 Recently we headed over to Mallorca and the Sa Calobra climb for a long weekend with 3 days of riding and some Winter sun. We picked a good time as it snowed at home. The temperature in Mallorca crept up gradually to 21 degrees by the last day. By going at the end of January we managed to pay a visit before any of the tourist seasons started. The cycling one and the holidaymakers one – this has some advantages and disadvantages.

By going when we did, we avoided having reams of traffic on any of the roads. The road down to Sa Calobra gets infested with coaches making their way to the beach at the bottom. This would somewhat ruin the fun of the descent for a cyclist and complicate things whilst going back uphill. The disadvantages were that some shops/cafes were shut and most of the stuff normally open for cyclists was shut too. The place we hired our bikes from is open daily from February onwards. But in January was open only for us to collect and drop-off our bikes.

We hired from Pro Cycle Hire, based in Port de Pollenca. We both wanted to try out Di2 electronic gears. It was an option on the hire bikes but not something that we have on our bikes at home. It felt a bit weird to begin with, pressing a button instead of pushing a lever. They don’t give you the same feedback that the gear is about to change. It was certainly noticeable though on a longer ride that it reduced the effort needed to change gears. Particularly for Hannah whose wrist usually hurts when making front derailleur gear changes.

We sent our measurements before heading out to Mallorca, this meant they were ready to ride straight away. It also meant that my bike looked a bit weird. It had a large amount of fork tube sticking out the top to fit my requested aggressive position. The bikes were nice, light, didn’t break, didn’t puncture and never felt like a hindrance.

Getting to the Sa Calobra climb

We decided not to cycle from the coast but to park the car amongst the hills in Lluc. This made us avoid the Coll de Femenia between Pollenca and Lluc, a decent climb in itself. We drove it instead, coming across plenty of cyclists. Straight out of Lluc we had a Cat 3 climb as a nice warm-up. 6 miles after we started, we were at the base of the Coll dells Reis northbound. Think of it as sort of the reverse climb of Sa Calobra. The hairpins on this climb gave us a taste of what was to come.

Cresting the Col, a cleft in the rock gave us a view of the sea and the winding road ahead.  We also came across some Trek – Segafredo riders in their new kit. The descent down to Sa Calobra was technical and hard work in itself. Not knowing the descent, neither of us took risks but I reached the bottom first as the heavier rider. The sheer amount of hairpins meant concentration was key. The traffic was low so we could take the line we wanted through each of the corners. Once the road started straightening out, it became more fun. Especially as it didn’t look like there were as many sheer drops to worry about! We made it down without issue and treated ourselves to coffee and cake at a cafe on the beach.

The climb back up from the village of Sa Calobra can be split into three parts. The first part takes you up to the narrow cleave in the rock. You’ll have seen it on the way down and wondered how coaches fit through there. The second part takes you from there up to the squiggly sections. It’s nice and open and eventually, you can see the final part approaching. The third and final part is all the squiggly hairpin sections, the corkscrew and the summit. Breaking the climb down in this way helps mentally tick off what you’ve done and how much is left.

The Sa Calobra climb is 5.8 miles at an average of 7%. It works out as 2,200ft of climbing all in one go. We’d agreed to ride it at our own pace, assuming that I would reach the summit first. The plan was for me to finish, turn-around, find Hannah and then ride whatever was left for the second time.

I started quickly from the beginning of the Coll del Reis sign in Sa Calobra but soon ran out of gears. Although the last one I had was perfect for nearly all of the climb. I tried to keep my heart rate at a reasonable level and the cadence around 90rpm so that I wasn’t going too fast, too early. In retrospect, I probably could have afforded to push a bit more…maybe next time.

Nearing the Top of Sa Calobra

As I ascended and started rounding corners, I could see where I had ridden from. Every now and again I could even look down and see Hannah on the other side of the valley below. Looking up, I had no-one to chase. But I could just about see the bridge of the corkscrew section very close to the summit. I could also see the long and winding path I would have to take before getting to it.

The hairpins started, surprisingly they weren’t too difficult to ride through with no massive gradient changes to power through. Riding around the outside of them definitely helps in this regard. Briefly, I saw Hannah again below before rounding a bend and going under the bridge for the corkscrew. The wind kicked in and meant I couldn’t look over the edge all the way down without getting blown around. With the top in sight, I pushed hard and made it with a time of 45 minutes and 39 seconds.