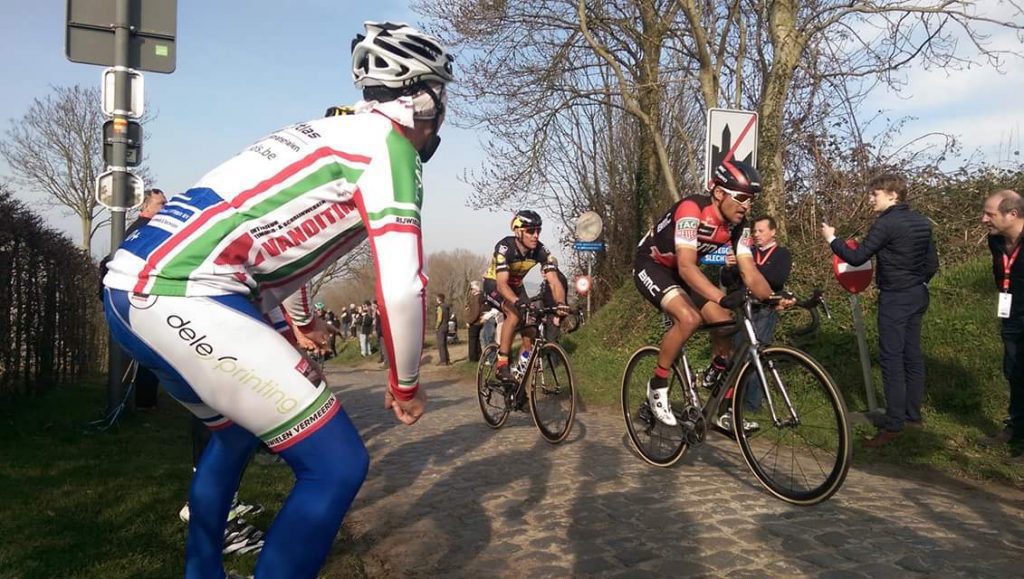 E3 Harelbeke, known as the Little Tour of Flanders, is an ideal warm-up for the main event itself – the Ronde van Vlaanderen itself. The route covers many of the same cobbled hellingen (hills to English speakers), particularly the Oude Kwaremont, the Paterberg and the Taaienberg. The last two riders to do ‘the double’ were the kings of Flanders themselves, Tom Boonen and Fabian Cancellara in 2012 and 2013 respectively.

The cobbles and hills serve to create some tired legs, but the last 10-20km are more or less flat once they’ve crested the relatively easy Tiegemberg. Expect the winning break to happen before this point or it will come down to a sprint finish, ruling out some of the purer classics riders.

The big two need a mention, Greg Van Avermaet won E3 Harelbeke last year but hasn’t performed to the same level so far this year, a 17th in Milan – Sanremo is his best one-day result. Peter Sagan won E3 in 2014, top 10s in Milan – Sanremo and Strade Bianche means he’ll be up there again.  The other two riders from last year’s winning breakaway (seen together on the Oude Kwaremont below) Philippe Gilbert and Oliver Naesen will be racing again. 5th in Omloop and 2nd in Le Samyn, Gilbert is in good form. Naesen has been a bit harder to find so far in races this year – the best result of 11th in Kuurne – Brussels – Kuurne, however, we’re now entering his focus period.

Tiesj Benoot is coming off the back of his stunning win in Strade Bianche this year. Having said he was on the cusp of a big result then, he’s become a guaranteed contender – he also ended up 4th overall in Tirreno – Adriatico. Sep Vanmarcke is a perennial classics race contender. 3rd already this season in Omloop, he’s usually guaranteed a top 10. Sonny Colbrelli came 7th last year, he’s got 3 top 10s in one-day classics already this year – definitely a contender, especially if it comes to a sprint finish.

Similarly hoping for a sprint finish are the likes of Arnaud Demare, John Degenkolb and Alexander Kristoff. With two Milan – Sanremo winners and a Paris – Roubaix winner, all three have pedigree. Demare has already podiumed both Kuurne – Brussels – Kuurne and Milan – Sanremo this season and won a stage at Paris – Nice. Degenkolb won two of the early pre-season races in Mallorca but hasn’t matched that since – his best result in E3 Harelbeke is 6th place. Kristoff managed 4th in Milan – Sanremo in the desperate attempt to catch Vincenzo Nibali. His best result in this race is also a 4th place back in 2015.

Finally, Trek teammate of Degenkolb, Jasper Stuyven has top 10s in Milan – Sanremo and Omloop so far this year. If he’s allowed to work for himself he will have the chance to match or improve upon his best finish of 5th place in E3 Harelbeke.

Michael Valgren took a stunning victory in this year’s Omloop Het Nieuwsblad, fully announcing himself on the big stage as a classics rider. He came 6th in E3 Harelbeke last year and is clearly in some cracking form. Luke Durbridge was also in the mix last year, finishing 4th and leading in the main pack. He’s been quieter so far this season though. Edvald Boasson Hagen is still struggling for some form but can’t be ruled out, 16th in Milan – Sanremo after the bad crash and damage to Mark Cavendish shows the form is starting to trend in the right direction.

If it does come down to a sprint finish, it will be hard to rule out Michael Matthews. E3 will be only his 3rd race of the season, but 7th in Milan – Sanremo shows he has the legs. Bryan Coquard would also be in the mix in a sprint but still seems a step behind the 2016 form he showed. Katusha’s Baptiste Planckaert would hope to repeat his 4th place in this week’s Driedaagse De Panne, again a sprint finish favours him.

Finally the strong man sort of riders. Sky’s Ian Stannard, if allowed to race for himself, is capable of a strong result. He’s already finished on the podium here but so far this season has been pressed into a helper role. This is more his sort of race. Wanty Group Gobert’s Guillaume Van Keirsbulck is a perennial outside for the Spring Classics. He’s more than capable of a top 20 or higher. Veranda Willem’s Sean de Bie has some form, finishing 4th in GP Industria and 8th in Nokere Koerse. E3 Harelbeke is a level above these races, but the potential is clearly there.