Flashback to the 1924 Giro d’Italia 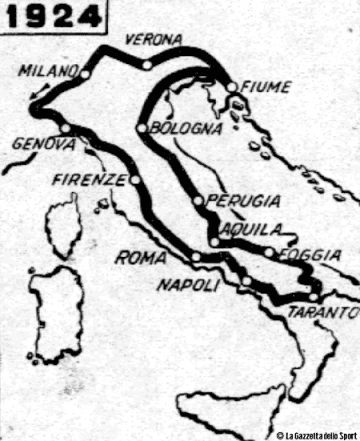 The 1924 Giro d’Italia still holds a unique place in cycling history. Nearly 100 years later, it’s the the only time that a woman has raced in the men’s peloton at a Grand Tour.

The situation came about due to a rider strike shortly before the race was due to start. Because the start list had been cut down, the race organisers allowed independent riders to enter. The organisers also paid for bed, board and a daily massage.

With that being the situation, legend has it an Alfonsin Strada entered and was given a race number – 72. With that spelling, it wasn’t necessarily obvious that it was Alfonsina entering. Other sources say that she was invited to enter by the race organisers.

She’d raced against men before, taking part in the 1917 and 1918 Il Lombardia races at the invitation of Gazzetta Dello Sport. In those races, she’d finished last and last but one. Strada was considered the best women’s cyclist in Italy during that time.

So with previous winners Costante Girardengo and Giovanni Brunero not racing, there was the chance for someone previously unheralded to win. Ottavio Bottecchia went off and won the 1924 Tour de France instead. 90 riders ultimately would start the 1924 Giro d’Italia. For the 2nd year in a row, the peloton consisted of only Italians. Unthinkable in today’s modern globalised races.

The race itself lasted for 12 stages. The shortest stage was 230km and the longest, a hefty 415km. In comparison, Milan San Remo is considered pretty long to the modern peloton at 291km. The race both started and finished in Milan but headed all the way down to the heel of the boot of Italy. The end of the 5th stage saw riders arrive in Taranto before turning around to head north again the next day. The Alps weren’t visited but the Dolomites were paid a visit and the long spine of the Apennines was rarely escaped throughout.

Alfonsina Strada was 34 by the time of the 1924 Giro d’Italia. Married, her husband gifted her a racing bike on their wedding day. She’d already set a women’s hour record too (although the UCI only started counting in 1955). Strada set out to complete all of the Giro d’Italia and become the first female finisher, as well as the first female entrant. The first 7 stages were successfully negotiated before an incident marred 8th Stage ruined the plan. She didn’t just bring up the rear on those stages either, she was beating a fair few of the men.

Stage 8 saw wind and rain batter the riders. She fell off numerous times and suffered plenty of punctures on roads that we’d refuse to ride on today. She even managed to break her handlebars in one of the crashes. A fix was cobbled together using a broom handle to get her to the end of the stage. 15 hours after starting, Strada rolled into Perugia but outside the time limit. A discussion was held and on this occasion the judges were lenient.

That aforementioned longest stage (Stage 10) took place a couple of days later. It saw riders complete 415km from Bologna to Fiume (now Rijeka in Croatia). Strada completed the stage in 21 hours, again outside the time limit, and this time was removed from the race. She was hurt and finished the stage in tears after another bad crash that day but fans lifted her from her bike in celebration.

Up until this point, having a female rider was proving to be a promotional boon despite the potential scandal. The newly fascist Italy focused on her partaking in a man’s sport and on a man’s bike too. Her looks weren’t off-limits either, her short hair, bare legs and ‘muscle-bound’ physique were also the subject of jokes in the press. She was allowed to continue riding the race and paid to do so – the handsome sum of 50,000 lira. However, she would not now be included in the classification standings.

Strada would make it to Milan and finish the race distance, a mighty 3,610km. Her time was still recorded, even if not classified. She finished 38 hours behind the winner with the last classified rider finishing 20 hours behind.

Whilst Alfonsina Strada was getting round the route, there was an epic battle taking place at the front of the race too.

The first stage was won by over 10 minutes by Bartolomeo Aymo. He kept the lead after Stage 2. Stage 3 saw one of the genuine contenders take the lead for the first time in Federico Gay. He was nearly 15 minutes ahead of 2nd placed Giuseppe Enrici. Bartolomeo Aymo had to abandon the race at this point.

Gay maintained his lead after stage 4, slighting increased now to 16 minutes. Stage 7 was the crucial turning point in the 1924 Giro d’Italia. The genuine climbers took advantage of the parcours and Gay lost over 17 minutes. Enrici was now the race leader, just 68 seconds ahead of Gay and then an hour to the next rider.

That same Stage 8 that pounded Strada into missing the time cut for the first time, destroyed Gay. He lost 40 minutes and Enrici seemed to have the race sewn up. Stage 10 saw Enrici gain another 9 minutes over Gay. After this day, Enrici managed to get his foot infected and whilst he couldn’t walk, luckily he could still pedal and made it to the finish.

Enrici was born in America, so there’s an argument for him being the first American Grand Tour winner but don’t be surprised if your local pub quiz doesn’t mark that as correct!

Alfonsina Strada tried to enter the 1925 Giro d’Italia but was denied. It’s not clear if she tried the ‘Alfonsin‘ story again but clearly the race organisers weren’t about to let her race again. Aware of self-promotion, she’d handed out photographs of herself and signed plenty of autographs. The King and Mussolini, who’d come to power the year before, was keen to meet her.

She continued to race throughout Europe after the 1924 Giro d’Italia. Particularly on the boards of the track and made a living racing. She also opened a bike shop with her second husband and raced exhibitions into the 1950s, often against a rival that had to be found for her.

Strada died in 1959, aged 68, suffering a heart attack on her way home from watching the Tre Valli Veresine race.

Giuseppe Enrici never won another Giro d’Italia. He’d been 3rd place in the 1922 Giro d’Italia so with stronger competition removed, it wasn’t a huge surprise he won this edition. Interesting, Bartolomeo Aymo who took the early lead in the 1924 edition, was 2nd place in 1922. Enrici only raced for another 4 years after this Giro, retiring at the age of 30.

Federico Gay had a couple more notable achievements left in him, the winning of a 2nd Milano-Turino race and Zurich-Berlin. He’d taken part in the 1920 Olympics. Then he won a Tour de France stage in 1922, which paired with his 4 stage wins in the 1924 Giro d’Italia made him a 5-time Grand Tour stage winner.

The following year, the striking riders returned and Alfredo Binda won ahead of Costante Girardengo. Normal service had been resumed.