The forgotten story of Julien Vervaecke 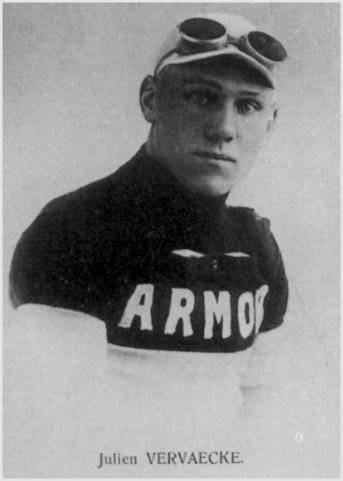 Born just before the end of the 19th Century, Julien Vervaecke went onto win a monument and finish on the podium of the Tour de France. His career was not without controversy, Paris Roubaix, in particular, proving to have its fair share. Ultimately, it was a life to end in tragedy.

The early career of Julien Vervaecke

The first record of Julien Vervaecke racing comes from 1924. The 25-year-old was racing as an independent, with no team. The following year, Vervaecke won his first major stage race, the Circuit Franco-Belge. This race lives on to the modern-day, now known as Eurometropole and changed to a one day race. To prove it wasn’t a fluke, Vervaecke won the race again the next year too.

1927 saw Julien Vervaecke snapped up by the Peugeot and Armor teams, with an invite to ride the Tour de France for the first time. That faith was repaid with a stage win heading into Briancon. The south of France suited the Belgian, finishing in the top-10 of 7 stages in a row. A solo breakaway on Stage 16 saw him finish 4 minutes and 31 seconds ahead of the 2nd placed rider, teammate Nicolas Frantz. Frantz himself won the Tour that year by nearly 2 hours, something that sounds completely alien to modern watchers of the Tour.

Frantz also won the 1928 Tour, but ‘only’ by 50 minutes. Julien Vervaecke found himself in 5th place overall. Vervaecke was 8th in 1929, also winning the stage to Evian ahead of Nicolas Frantz.

The first controversy to hit Vervaecke’s career was in the 1930 Paris Roubaix. Vervaecke attacked with 65km left to race and only Jean Marechal was able to keep up. Marechal had his own chequered past, spurning his mentor to switch teams saw him lose his amateur national title and ultimately any team support. He rode the 1930 Paris Roubaix as an independent.

So the two riders were out in front together, initially working well as a pair. Vervaecke’s Alcyon team manager gave orders for him to sit on and not do any work. Which Vervaecke was happy to do, whistling whilst taking it easy behind Marechal. Eventually, he attacked. Attempting to drop Marechal and temporarily succeeding. Marechal caught up with 6km to go, however. The two then clashed and Vervaeke ended up in a ditch.

Marechal reached Roubaix alone but already things were happening behind the scenes. The Alcyon manager lodged a protest, demanding Marechal be disqualified. Pretty quickly, Marechal was relegated to 2nd place. This in itself was odd. If Marechal was guilty of causing Vervaecke’s crash, an outright disqualification was the normal punishment. Marechal himself reckoned there had only been the briefest brush of elbows between the riders

One thought was that Belgian fans had swayed the decision of the commissaires. The more likely story is to do with the amount of money that Alcyon paid to race organisers L’Auto in advertising monies. Marechal did go onto win Paris Tour later that year but felt he’d been robbed of his greatest victory.

The later career of Julien Vervaecke

Another successful stint at the Tour de France saw Vervaecke finish 6th in 1931. This was to be the last Tour he finished though. His brother Felicien had joined the Alcyon team in 1930 and both then moved to the Labor team for 1932. On the new team, Vervaecke won the then highly prestigious Paris-Brussels. He won by close to 10 minutes after over 11 hours of racing.

There was still time for further controversy, once again at Paris Roubaix. The 1933 race saw Vervaecke and teammate Sylvere Maes escape from the peloton together. The team manager spoke to Vervaecke in French, a language Maes didn’t speak. When Maes asked Vervaecke what the manager had said, Vervaecke told Maes he’d said ‘You must let me win. Your turn will come next year.’ Now Maes was in his rookie season as a pro cyclist but chose not to believe Vervaecke. A future double-Tour winner, Maes went on to win the final sprint and it’s not known what the manager actually said.

After this point, Julien’s career began to peter out, just as his brother Felicien’s began to bloom. Felicien won 6 Tour stages, a Giro stage and also won a pair of Polka Dot jerseys. He too finished on the podium of the Tour de France (2nd and 3rd places) but never won the most famous race of all. Later on, he would become the first manager of Eddy Merckx. There was also another brother, Alidor, but his career was much quieter.

The death of Julien Vervaecke

Most cyclists live a long time after their careers and grow old. Felicien Vervaecke lived until 1986, for example. Julien Vervaecke died during the Second World War but not in the way that you’d think.

After his cycling career finished, Vervaecke took over a restaurant in Menen. The town lies on the river Leie which acts as the border between Belgium and France. With the Allies on the run to Dunkerque after the German blitzkrieg in 1940, Menen happened to fall in the closing pocket not yet overrun.

2 days before the famous evacuation took place, British and Polish soldiers made short work of Vervaecke’s restaurant in the hunt for supplies. One source reckons that the soldiers wanted to take the restaurant’s furniture for use in a barricade.

Vervaecke resisted and was led away. It’s unclear what exactly happened, but Vervaecke’s body turned up a few weeks later across the border to France in Roncq. The suggestion being that the Allied troops ended up detaining and then shooting the former Paris Roubaix winner.