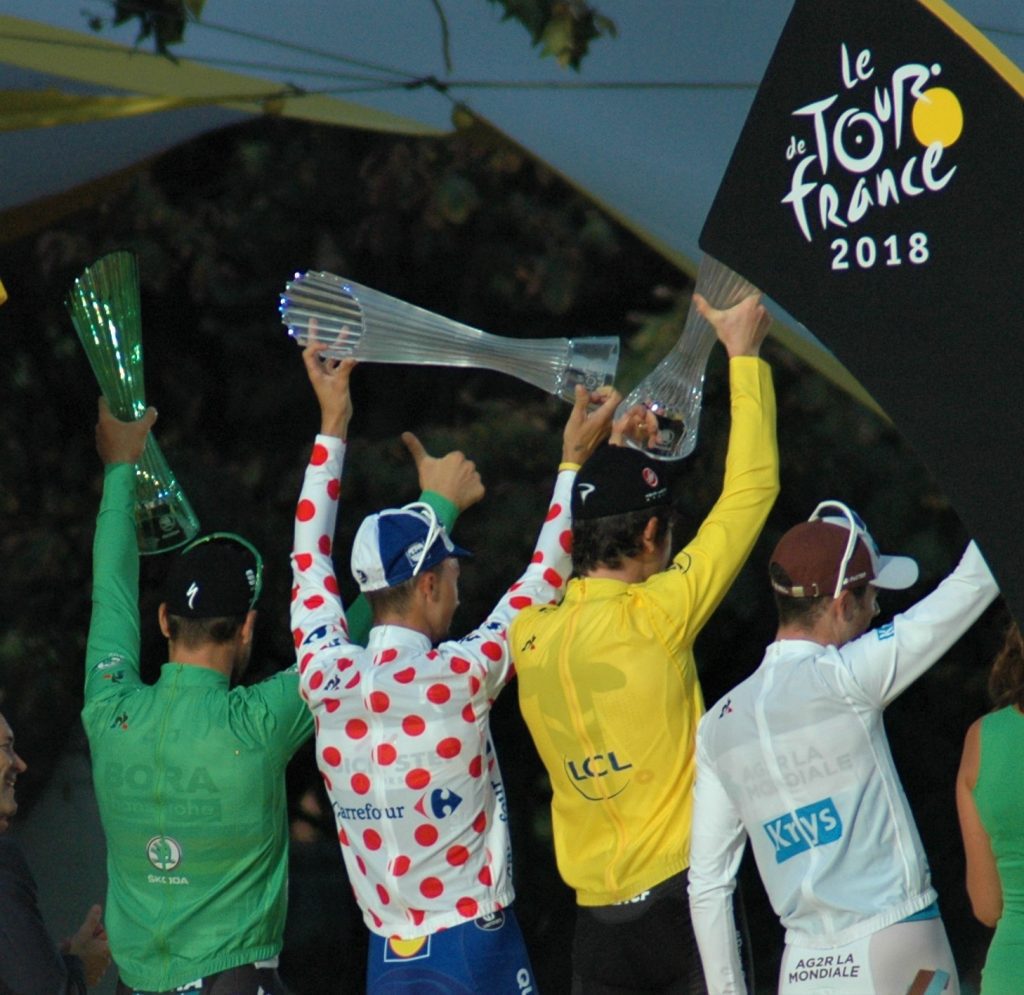 We hear a lot of the French cycling terms over the season. Traditionally, it was the language of the peloton although English has started to win over in recent years. It hasn’t taken long to use the first French loan word either – peloton! Often its misspelling is a sign of who follows professional cycling year-round and who might only tune into ITV4 over the summer to watch Le Tour.

The main group of cyclists, the literal translation is a platoon. This is surely the most well-known of all the french cycling terms

A helper on the team, their purpose is to take the wind, run errands and hunt down the breakaway

The fancy French word for a natural climber like Romain Bardet

The various jerseys – yellow, green, polka dot and white – that are won in the Tour de France. Maillot Jaune is the one most commonly used French Words by the English-speaking cycling media

A hard-to-define smoothness in pedalling style, usually synonymous with class too

Time Trial – its literal translation is against the clock, invoking a heroic battle of riders against time. You might hear it in tv coverage pieces or in a race roadbook

A long, timed cycling event. The Brevet is often a card that is stamped to provide evidence a route has been completed properly

Someone who takes part in super-long rides, potentially with a brevet. These are people who do audaxes or the trans-continental race

Once bib short pads were made from chamois leather. Now the plucky, lucky chamois is safe thanks to modern fabrics but the name has stuck

Back in the day, riders had to stop, undo their wheel and flip it over to change gear. Then Simplex came up with the first rear derailleur as we know it today (there’d been other rod push ones not using cables). Campagnolo improved on it and everything else since has been a refinement of what SunTour put out in the 1960s

Often shortened to DS so journalistic bad spelling isn’t exposed. The DS is the head honcho of the team. They’ll be the ones in the team car shouting at riders to go faster. The translation is just ‘sporting director’ but you’re more likely to hear the french cycling word version instead

The French cycling term that French people don’t use! The English-speaking world reckons it makes sense though for the formation of riders in a crosswind. The real word is further down

Named for the red flag that marks the last kilometre of a stage. I suppose it looks like a flame too

The big depart! Day 1 of the Tour de France

In relation to mountains, the HC ones are ‘beyond categorisation’. The most difficult climbs in the Tour de France, these were ones that a car wasn’t expected to be able to summit

The red lantern originates from the backs of train carriages which always had red lights. The person in the last place in Le Tour earns this infamous and surprisingly affectionate title

It’s the bag that riders get to eat their lunch from at the feed zone. It translates to haversack or more cynically a nosebag

It’s the French to carry, unsurprisingly it’s used for when a rider carries their bike

It translates as it sounds but describes a rider who specialises in rolling terrain with short climbs. Often synonymous with classics riders like Philippe Gilbert and Julian Alaphillipe

Similar to the Randonneur, the Randonnee is the long-distance event a randonneur takes part in

Revitaillement is supplying or supplies, in cycling it refers to the feed zone

Another rider type, the Rouleur is a roller who can sit at the front of the peloton and drive the pace all day. Once the mountains arrive though, they’re done

From the French verb to take care of, it literally means caretaker. The soigneur looks after riders’ needs and provides general support

The head of the race, it’s usually seen shown on TV whilst showing the front breakaway group

The French for bike, it comes from one of the original names for a bicycle, the velocipede. The velocipede had cranks on the front wheel to be pedalled, making steering an interesting pastime, on the plus side no mucky drivetrain!

Like what an aerodrome is to aeroplanes, a velodrome is to velos…or bikes! The short indoor track is used in the world of track cycling, a sometimes interconnected discipline that’s also very separate in its traditions and history. The likes of Geraint Thomas, Chris Boardman and Rik van Steenbergen are famous for being successful in both forms of cycling

The following list of French cycling words are ones that you’re unlikely to hear very often in TV commentary. Probably just when David Millar or another commentator feels like showing off their linguistic skills. These are the proper cycling terms in French and full of phrases and idioms.

This is the actual word the French use for echelon, it means border or edge

When your legs are frozen solid by the cold, can also be spasms or cramps

To recover or to regain health

To quietly slide off the front of the peloton like a postman, the opposite of a fierce attack

Another word for the peloton. A paquet is a group of riders.

To feel frisky, the literal meaning is “ants in the legs”

Farting fire or in great shape and confidence

A big butt, slang for a sprinter

To get a gap

To fill the hole or close a gap

To ride straight through the without collecting a musette

To blow a group of riders apart

Having a lightweight sock, so to feel as if you’re pedalling with ease

Legs of cotton or to feel weak

To stand up on the pedals, like a dancer

Slang for the brake hoods

Literally cooked and slang for tired

To suffer because you’re above your threshold – in the red

When your chain is on the inner ring and the biggest sprocket on the cassette, ie everything is to the left

Soft pedalling, it literally means to “save something under your sole”

Jostling for position or elbowing your way through

To rub shoulders, in particular, whilst in the peloton

To finish on the rim, like how when you’ve punctured and have to ride slowly to stop the tyre rolling off

The winning breakaway is “the good wagon”