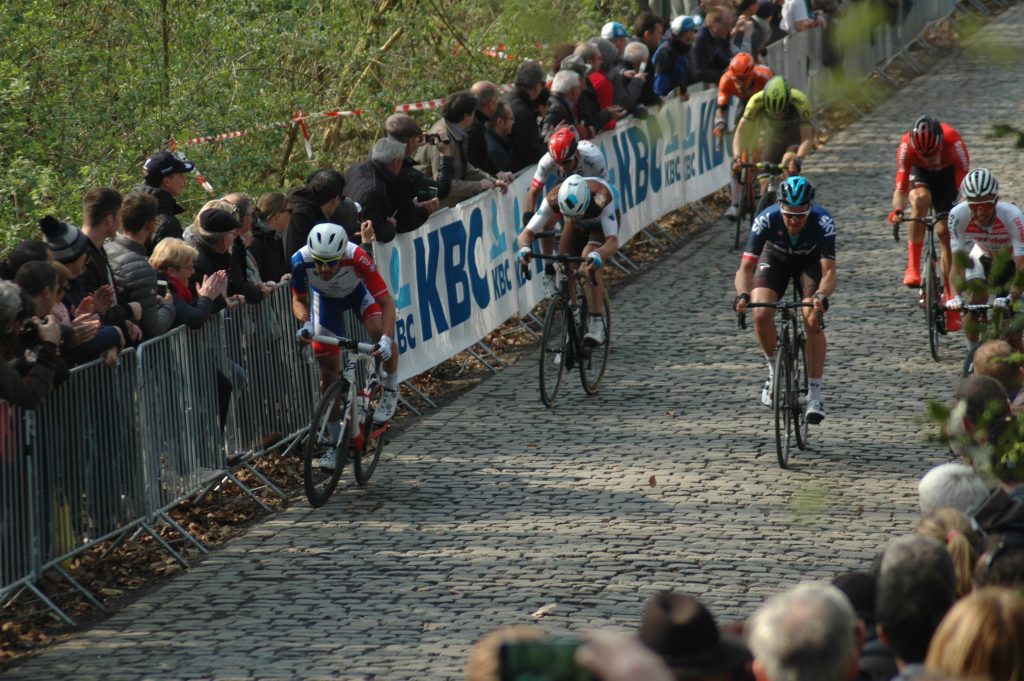 Gent Wevelgem was first run in 1934 and is yet another race started by a newspaper. The race originally visited the Flemish Ardennes to create a hilly race but since the 1980s has become more of a sprinter’s classic.

The start moved to Deinze in 2003. From 2015, the race has embraced its location where WW1 battles were fought and added In Flanders Fields
to its official title. In modern times, Gent Wevelgem has usually been won by puncheurs with a sprint. Decent sized groups can make it back to Wevelgem all together – 28 in 2019, 19 in 2018 and 42 in 2017 just 6 seconds behind the front pair.

Those without a sprint find themselves finishing near the rear of these packs. Other than the Kemmelberg, there aren’t many legbreaker hills included in the route. But combined with the windswept polders section, there’s enough to sap the legs of all but the strongest riders on the day.

2017 saw the introduction of the Plugstreets. Unpaved roads with a
fine layer of white gravel on the top including the leg-sapping rise over
Hill 63 from the Battle of Messines. These sections reflect how much of
the local history is linked to the battlefields and war cemeteries from
World War I.

The last 30km is almost flat and sees intense racing as the non-sprinters try to attack the peloton and gain an advantage. Sometimes these moves do pay off, like in 2016 & 2017.

Another race that saw riders have to race in borderline dangerous conditions. Post-race the riders said they were close to calling for the race to be neutralised.

Riding across the polders to the Belgian coast, three-quarters of the peloton had been dropped or quit as the race headed back towards the hills. The wind being strong enough to sweep riders into ditches and preventing echelons from forming.

6 riders found themselves at the front with 10km to go. Geraint Thomas had been blown off his bike but stayed near the front. Niki Terpstra punctured at a crucial moment. Luca Paolini attacked twice with 6km to go and stayed clear to win.

The peloton finished 5 minutes behind and only 39 riders actually finished.

The Kemmelberg is the key climb in Gent Wevelgem. The Belvedere side is raced first but the Ossuary side is the famous, steepest, cobbled side. The Kemmelberg is 0.7 km long at an average of 9%.

The bottom of the climb is tarmac but by the ossuary memorial, the cobbles start. Shortly afterwards the riders reach the max gradient of 22%.

The faces of pain pulled by pro riders on this section is worth seeing in person.