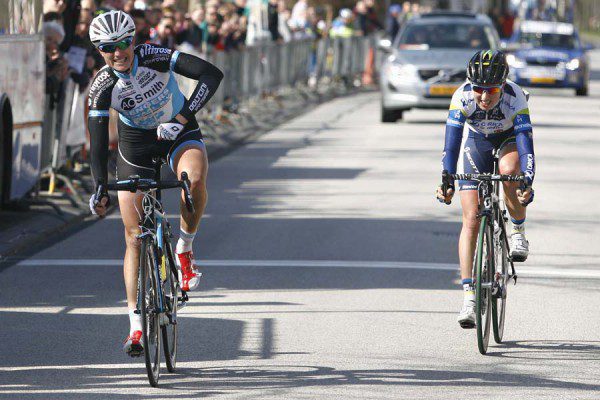 The Omloop Van Borsele became a professional race in 2002 but has been held each year since 1983. It takes place just over the border from Antwerp in the very flat Dutch province of Zeeland. Primarily a sprinter’s classic, the flat parcours often creates massive splits in the peloton on windy days. That said, strong savvy sprinters will still find themselves in the front group to take the win.

Since 2012, there is a time trial of roughly 15-20km that takes place the day before the race. Riders will often ride both but it isn’t mandatory. The times from the time trial aren’t carried over into the race so they can be thought of as two separate events. Ellen van Dijk has won this time trial 4 times and in 2012 won both the time trial and the main Omloop van Borsele. Lisa Brennauer, Hayley Simmonds, Aafke Soet and Pernille Mathiesen are the other winners.

A windy day meant that the flat parcours would offer no shelter for struggling riders. Ellen van Dijk had won the time trial the day before but was unable to race the following day because of illness. 2nd place in the TT went to Loes Gunnewijk who joined Vera Koedooder in an attack with 50km left to race. Lucinda Brand, Chloe Hosking and Nina Kessler made up the rest of the break.

They soon gained a large gap, particularly over most of the peloton. There was a second group gamely chasing behind but they could make no headway. Even with the likes of Amanda Spratt, Annemiek van Vleuten and Amy Pieters, the gap to the front riders wouldn’t come down.

With around 20km to go, Vera Koedooder attacked and this time only Gunnewijk could join her. Lucinda Brand missed the initial move but gamely kept the gap under control. Approaching the finish line, Koedooder was strongest in the sprint and took the win in front of Gunnewijk with Brand 3rd.

A couple of minutes passed before the next group arrived and it was over 5 minutes for the 3rd group. The majority of riders were over 10 minutes back, including pre-race favourite Kristen Wild. She’d crashed early on but recovered to finish 20th.

There’s no exciting climbs but from the top of the Zeedijk you can view the riders from above as they race next to the sea/Scheldt river. The riders then do a short ‘climb’ up and around the dike (dijk) to come over to the other side. Without waiting long, it’s another chance to see the riders.

Another advantage is being able to see the riders coming and going from a long way away too!