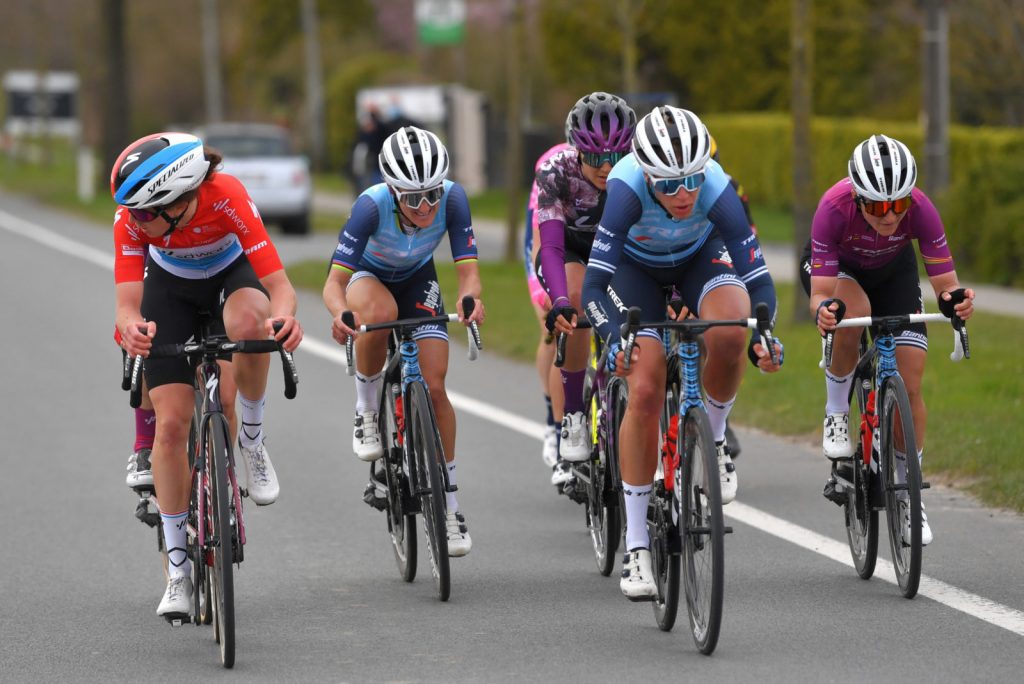 The Women’s Gent Wevelgem has been running since 2012. Taking place on the same day as the men’s race, the women’s version starts from Ypres and finishes in Wevelgem. The route takes in the infamous Kemmelberg, although the women don’t tackle the steepest Ossuary side. The flat run-in from the Kemmelberg to Wevelgem has seen split groups come back together and the race often finishes in a bunch sprint.

Since 2017, the riders tackle two loops of a hilly circuit containing the Kemmelberg (Belvedere side), Baneberg and Monteberg. The Belvedere side of the Kemmelberg is the toughest climb, being steep and cobbled. The Baneberg is short but very steep. Only 270 metres long but with the steepest part of 20%. Finally, the Monteberg is 0.7km long at 6%.

Just like the men’s race, the recent addition of the gravel-covered Plugstreets has created a new challenge. Their inclusion was a nod to the First World War, with plenty of the fighting taking place in the area of the race. Despite being relatively smooth, the gravel sucks away a rider’s effort and creates tired legs. The women tackle 3 stretches of gravel in the Women’s Gent Wevelgem.

Lasting 120km, the Women’s Gent Wevelgem’s shorter distance allows for more attacking racing. The first edition was won by Lizzie Deignan who attacked 40km from the finish line and won solo. Floortje Mackaij won in 2015 from a small breakaway that held off the chasing peloton. Chantal van den Broek-Blaak also won with a solo break in 2016. The 2017, 2018 and 2019 editions have all been bunch sprints.

The race split early on with the peloton suffering in head and crosswinds. By the first climb of the Kemmelberg, there was a front group of 28 riders, which contained all 6 Boels Dolmans riders. Wiggle High5 and Cervelo Bigla were also well represented with 4 riders each. Their lead grew and grew, reaching 90 seconds before the second ascent of the Kemmelberg.

Riders began to attack, first Ellen van Dijk and then Olga Zabelinskaya. These attacks shed a couple more riders from the group with just 23 left with 40km to race. The group split even more over the Monteberg with some big names falling behind. Lizzie Deignan attacked first and once she was caught it was time for another Boels Dolmans rider to attack.

Chantal Blaak attacked into the crosswinds with 10km to go. With plenty of teammates behind to disrupt the chase, Blaak was able to grind out an advantage of nearly 90 seconds by the finish line. Behind her, the group had split again with 7 riders remaining. Lisa Brennauer won the sprint for 2nd and Lucinda Brand finished 3rd.