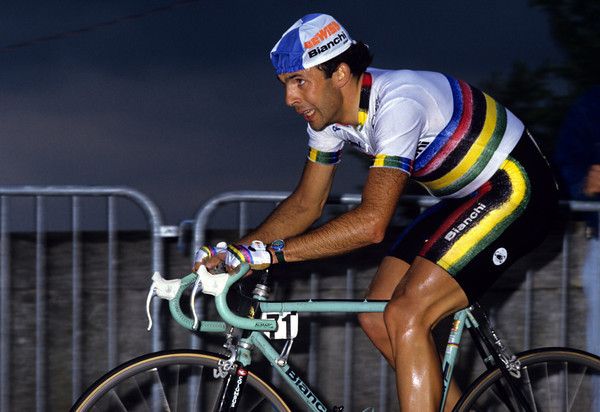 Moreno Argentin turned pro in the 1981 season and immediately won 2 stages of that year’s Giro d’Italia. He kept up a streak of winning stages in the Giro until 1985, when he won his first monument instead. Argentin won
Liège Bastogne Liège 3 times in a row from 1985 to 1987.

He also won the World Championships in 1986, after which Castelli created a unique jersey for him. Il Lombardia was ticked off in 1987 before a surprise 1988 season with no major wins. The next big win was a somewhat surprising one for the specialist of the Ardennes races, the Tour of Flanders in 1990. Other firsts were achieved too that year, a first Flèche Wallonne and a first Tour de France stage win.

He won a 4th Liège Bastogne Liège, putting him 2nd only to Merckx in that race and another victory on Flèche Wallonne’s Mur de Huy. Argentin came within a whisker of winning all of cycling’s monuments in 1992. Sean Kelly attacked and passed him in the last few metres. In Argentin’s last season
there was the infamous 1994 Flèche Wallonne win. Fuelled by EPO, Argentin and 2 teammates attacked with 72km and locked out the podium. The beginning of a new era.

Argentin spent the start of the race complaining that he didn’t have the strength to win a 3rd consecutive Liège Bastogne Liège. He’d had to skip Milan San Remo shortly before too. He was also wearing the rainbow
bands as the reigning World Champion so felt the pressure to perform.

A breakaway went and was caught and after the infamous Col de la Redoute, only 15 riders were at the front of the race. On the final climb of Côte de Sart-Tilman, Argentin cramped and Claude Criquielion attacked. Stephen Roche joined him and they got a gap. That gap then turned into a lead of 1 minute.

Both riders thought that was that, the winner was going to be one of them for sure. With 6km to go, they slowed and they got slower. Argentin, Millar and Madiot were gaining behind. With 500 metres to go, they were caught and Argentine sprinted from the back and took the win. Roche and Criquielion won many races in their careers but never Liège.