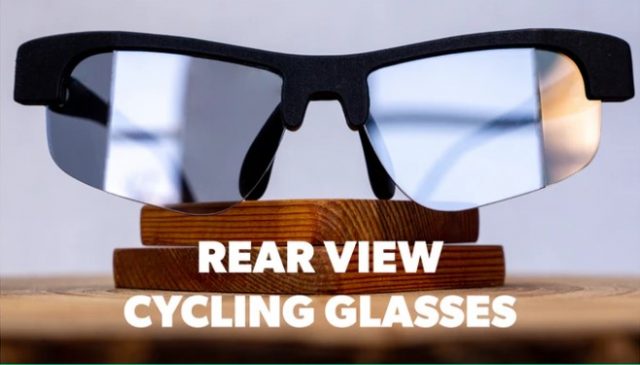 Hindsight Glasses were a concept I hadn’t seen before. It does happen, every now and again something appears in the cycling world that you haven’t come across before. Sometimes there’s a reason for that. Or they get a ban soon after launch. Spinaci bars being a good example.

Hindsight glasses allow you to see a reflection of what’s behind you whilst riding. For those who aren’t so good at looking over their shoulder to check for traffic without swerving. These are a godsend. There’s even an argument to wear these for those who do feel they can do that fine.

A recent Kickstarter campaign hopes to raise £30,000 to produce the first batches of glasses. Once successful in the kickstarter, the aim is to be able to send out the finished product by October 2020.

The creator of the glasses is Scot Alexander MacDonald. Also on board is Callum Skinner who is a brand ambassador. Callum is a former Great Britain track rider who won a gold medal in the team sprint in Rio 2016. He also won a silver medal too, losing out to fellow Brit Jason Kenny in the final.

ProCyclingUK spoke to them both about the Hindsight project.

Alex and Callum from Hindsight

Did you guys know each other before working together on Hindsight?

C: We were at high school together. We both went or separate ways for a while with Alex completing his Physics degree and working in London while I moved to Manchester to be a part of the British Cycling team.

What was the eureka moment that led to you developing the glasses?

C: We talk about this often, with the number of near misses and close passes cyclists face daily we were surprised that no one had come up with something like this before. Albeit more of an “oh sh**t” moment instead of a “eureka”. I fell into that camp of realising it was a problem but not doing much about it. Alex was the one who tried to objectively solve the problem after being a commuter in London and finding no adequate solution to the problem in the market place.

A: Honestly, it was a series of events for me – I frankly just got sick and tired of cars close passing me on my daily commute. I realised the best way to prevent them happening was to know whether the car behind me was on track for a close pass, so I could make sure I was a) aware it was coming and b) able to tactically position myself to mitigate it.

What are the benefits of the Hindsight glasses?

C: It’s a discreet, intuitive and no-fuss solution to greater awareness. The best way I can describe using them is that it’s like you have extended your periphery vision to what is going on behind you as well as to the side. If a driver, competitor or any other threat makes a move behind you, it immediately catches your eye, adjust your focus, and you have fantastic clarity in analysing the situation. It doesn’t impede your forward vision as the mirrored section of the lense is semi-transparent.

A: Callum put it very well, HindSight glasses have great utility in a number of situations – information is power after all. The glasses work simply – you can turn your head 5 degrees and pan the entire rear field of view, whether that’s an aggressive vehicle, to see if a can has acknowledged your change in speed or turn signal, or to see if another cyclist is pushing you in a competition. After all, rear vision is so important to safely operating on the roads that every other vehicle on them is required by law to have mirrors – the question that started HindSight was “why do cyclists have no good options?” Well, now they do.

I imagine there are experienced cyclists out there who would say they’re comfortable turning their head to look behind without drifting out – what would you say to them?

C: Every second you spend looking behind you is obviously a second where you are unaware of threats ahead of you, HindSight eliminates that issue. It becomes a matter of focusing your eyes appropriately instead of contorting your neck. There could also be performance benefits, I worked endlessly on maintaining an aerodynamic position during my career; all that work is redundant as soon as I have to physically look behind me.

A: I would just add that we made a great graphic to explain this (below) – cyclists currently just accept their loss of forward vision when checking behind, fundamentally because the solutions out there already just don’t work well enough. We thought we should put the issue to bed by making something designed for both a cyclist’s needs, and their lifestyle.

I’ve seen the prototype viewer, what are the glasses like to actually wear – is the rear-view distracting at all?

The prototype viewer is about half-way down the Kickstarter page

C: I haven’t found them distracting, as I said it feels quite natural to expand your periphery. We also worked tirelessly to find a manufacturer who could make us a “one-piece” lens, so there is no join between the flat forward-facing portion of the lense and the lightly mirrored angle portion of the lense.

A: As the mirrors are mostly transparent, the user can choose where their focus lies, putting them in full control with no distractions. The response we’ve had from nearly every single cyclist who has tried them has been “I didn’t want to give them back”, such was the utility it added to their awareness.

I noted that you were suggesting the glasses could give riders a competitive advantage. Do you think the relevant authorities would allow them to be used in competition?

C: We’ve had limited talks with the UCI; their opinion is that if it doesn’t impede forwards vision (we believe it doesn’t) and meets safety standards (which it will), there won’t be an issue. We are just scratching the surface in exploring performance benefits, aerodynamic profile improvement, competitor awareness, increased biomechanic efficiency are all possible positives as a result of not looking back.

A: We will be conducting a full academic study to prove that forward vision isn’t impeded which we’re confident won’t prove an issue, after which we’ll be hopefully revealing some exciting information – watch this space!

Finally, and naturally with no disrespect to Callum, but wouldn’t Philip Hindes be a better ambassador and then you could be HindeSight?

C: Haha for people who are a fan of that pun he has his photography Instagram page called “behindes the-lens”.