Matteo is, at just 23-years-old, one of the most promising sprint talents in the WorldTour. On January 30, he won his first bunch sprint with Trek-Segafredo. Then, for good measure, he added a second victory a few days later.

But everything came a crashing halt on February 7th.  During the third stage of the French race l’Etoile de Bessèges, Moschetti was involved in a high-speed crash.  This, as we all know, was followed by the on-going Covid-19 pandemic. So after a successful start to the season, racing came to a sudden standstill for the young sprinter.

Moschetti endured a lengthy and grueling rehabilitation, and when the 2020 season resumes in less than a month, Moschetti is hoping to continue where he left off.

As a neo-pro in 2019, Moschetti notched two top-five results in his maiden Giro d’Italia against sprinting royalty and finished runner-up in the steep, punchy finish in Hatta Dam at the UAE Tour. A promising start to his pro career.

However, several crashes and resulting injuries forced him to miss a big part of his first WorldTour season, and when Matteo began 2020 with a bang,  scoring his first wins with Trek-Segafredo in his first races of the season, his talent was beginning to unfold.

Below, Matteo Moschetti breaks down the sacrifice, tactics, and emotions of the always exhilarating bunch sprint and details his first victory with Trek-Segafredo that sunny winter day in Mallorca. 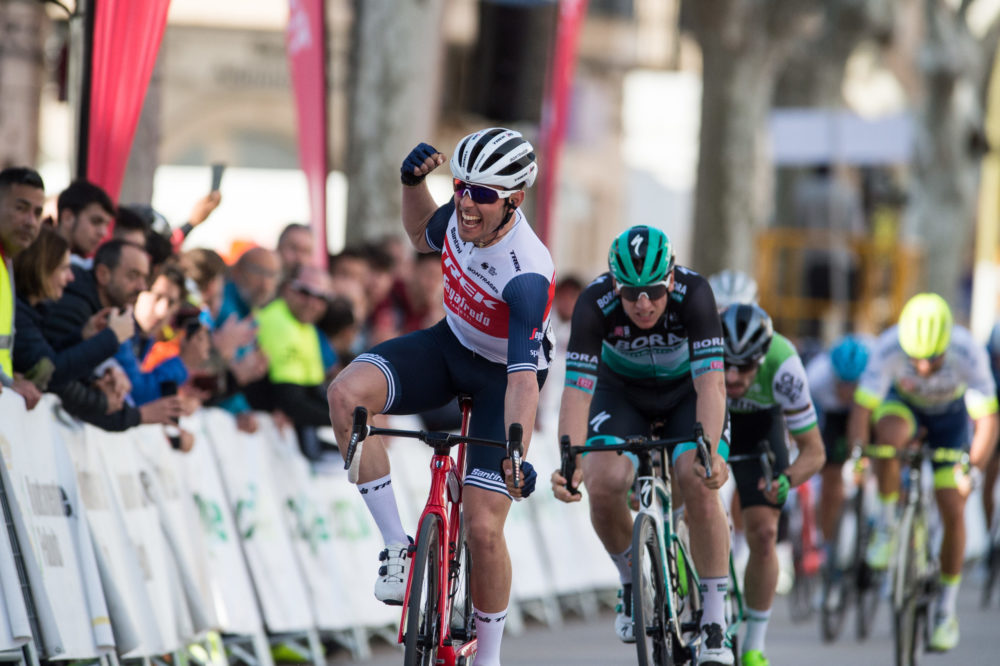 The anatomy of a sprint – by Matteo Moschetti

I remember that day clearly. It was my first race of the 2020 season, and I was feeling a mix of excitement and nervousness. My Trek-Segafredo teammates and me were super motivated to bring home the victory in our first race in Europe. I had raced in Mallorca the previous year but not as a designated sprinter, and this time I had the responsibility to fight for the win if it came down to the expected bunch sprint. It’s true there’s an added pressure when you know you have the team backing you and working for you, but that day I was mostly calm. I knew I had done my homework in the pre-season, I trained hard and felt ready to start anew after my complicated first year as a pro, plagued with injury.

We arrived at the Trofeo Felanitx with a strong team, and it was my first race with some of the new guys, including Emīls (Liepiņš), who was to be my lead-out man. He’s a fast guy, and we got on really well since the start. We were roommates in our first training camp in Sicily and sprinted a lot against each other. In training, when you can sprint against another fast guy, this gives you extra motivation. We got to know each other and understand each other and developed a strong friendship. So that day in the pre-race meeting, Emīls said to me, “if you go for the sprint, I’ll work 100% for you. Trust me, and don’t lose my wheel!” 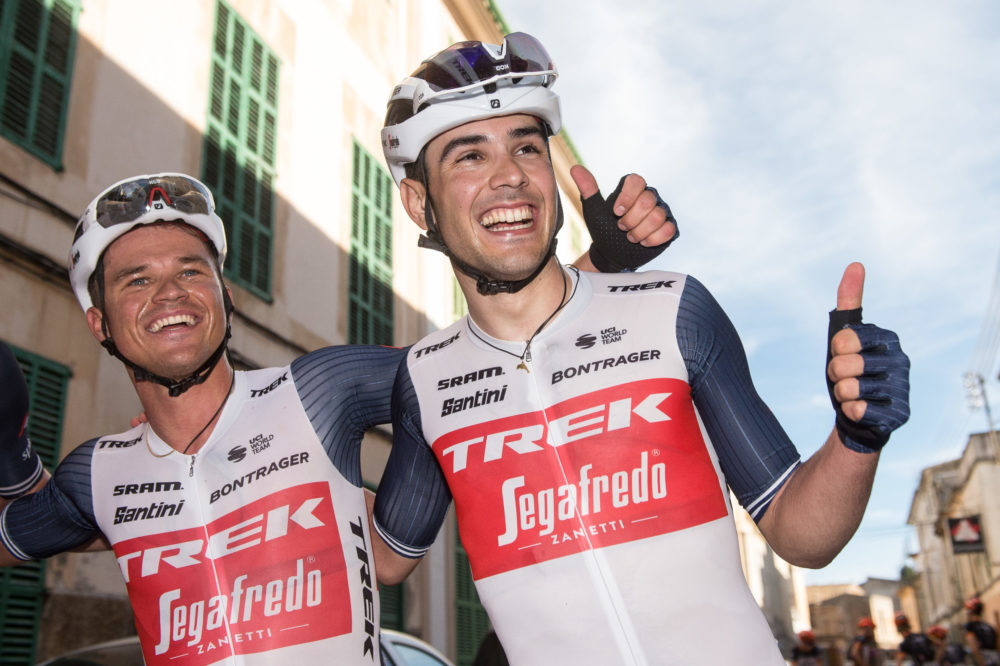 It took some time for the breakaway to go clear that day. It was a big fight, and for the first hour it was stressful and hectic. We didn’t want a large breakaway, so it wouldn’t be too difficult to bring it back. Finally, a group of four riders escaped. Bora-hansgrohe was riding for Pascal Ackermann, the main favorite for the race, and led the bunch. We helped to control the break with Alexander Kamp, who rode at the front most of the day, keeping the advantage always under five minutes.

The roads in Mallorca aren’t easy; they are undulating, sometimes they narrow without warning, and often you find dirty patches, which can easily lead to crashes.  So we were keen on staying together in the first 20 positions all day. It costs more energy riding in the front part of the bunch, but with this tactic, you save mental energy since you’re less stressed. You have a good view of the road, and you avoid most of the crashes that tend to happen in the middle of the peloton. Also, I feel there can be a psychological advantage to riding together at the front: you show to the other teams that we’re there, we’re strong and want to control the race and play our cards.

Once the race settled down, my focus was to stay out of the wind as much as possible and stay relaxed until around 50km to go. That’s when you typically get more focused and in ‘the zone.’

I believe you’re born with a natural ability to be fast, but to become a sprinter, you have to take it to another level.

Born fast or made fast?

This is my second year as a pro and only two years since I realized that I could truly be a sprinter. I’ve always been fast, but until 2018 I had never won a bunch sprint. Before, I always tried to make the race hard, go in breakaways, or attack in finals. I was riding for the continental team Polartec-Kometa and won a sprint in a reduced peloton on Stage 1 of Tour of Antalya. After that moment, I began to work more seriously on my sprint.

I believe you’re born with a natural ability to be fast, but to become a sprinter, you have to take it to another level. You must have the power in the legs, to push the watts, but that’s not everything. You have to be smart, especially if you don’t have a lead-out train or a good lead-out man. Then you must use the other riders to try to avoid the wind and always stay in a good position, without spending too much energy. You also must be fearless. If you have a small space to pass in a final sprint, you can’t think too much about it. You have to go; to commit. I think the sense of positioning is crucial; you need to be in the perfect position at 400 meters to the finish line.

Last season I learned a lot from some of my sprinter teammates. I’m grateful for the chances I had, and I’m motivated for the future. I know I must work hard to become stronger and arrive at the finish with more energy and fresher legs for the sprint. We’re also trying to improve my climbing so I can also be competitive in harder stages when the pure sprinters are dropped. In my heart and in my head, I know I can beat some of the fastest guys out there sometimes. I have trust in my ability, and so does the team. Our goal is that we grow together so I can become one of the best sprinters in the world one day. 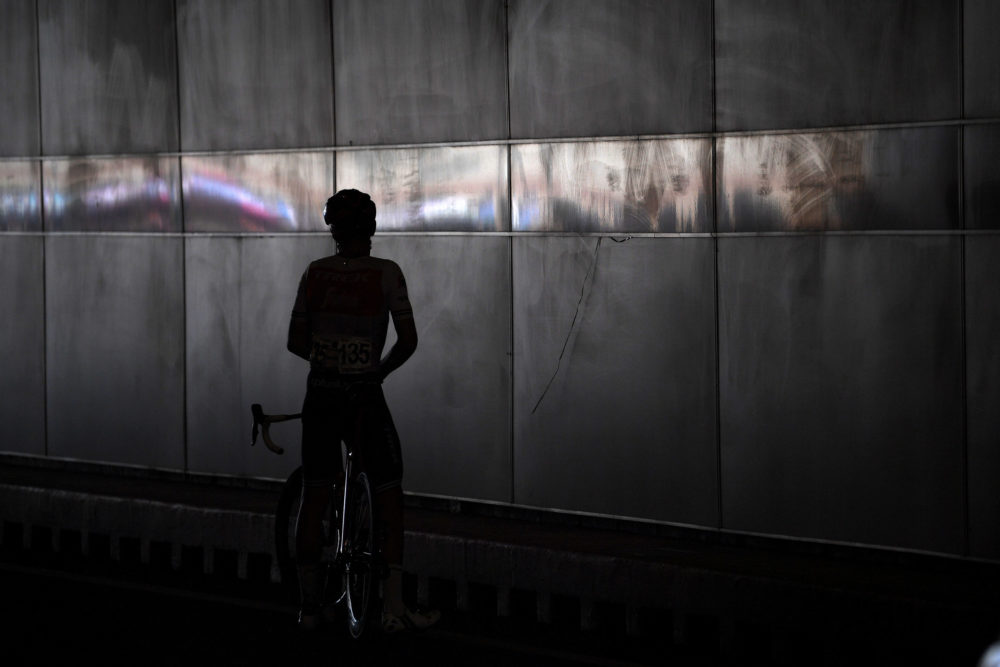 Matteo Moschetti, a sprinter ready to come out of the shadows.

That day in Mallorca, the team worked all day perfectly. We were always in a good position, in control. In the final 20km, we had to chase hard because in front there were still a couple of riders from the breakaway. That’s when the tension in the bunch started to build. You could feel it in the air. In the end, we only caught the last guy with three kilometers to go after great work from Quinn (Simmons) and Alex (Kirsch). We had a plan. Two plans, actually. Jasper (Stuyven) was set to launch a late attack, but he decided it was not the best idea to go, so he switched to plan B, which was to work to set me up for the bunch sprint. At that point, Ryan (Mullen) was at the front, keeping a high speed and good positioning. The parcours that day worked in our favor because when you have corners and narrow roads in the last few kilometers, not many guys can pass you, so our focus was to take the front and stay at the front.

In races like these, where there aren’t many WorldTour teams to control, it can become quite chaotic. On the one hand, you have fewer sprint trains to fight against for positioning, but on the other, you have riders from smaller teams who are willing to risk everything, which can lead to crashes or losing a wheel. At this point, you have to be fully focused and get into ‘sprinter mode’. You must be aggressive, fight for your position, and not be afraid, otherwise you hit the brakes and must spend energy to come back to the wheels.

Communication is key, but it’s so noisy, you can only shout words like right, left, or accelerate. In these moments, some of your teammates can get too excited and go too fast too soon, so often it’s important to be that voice that says, “Guys, keep calm! There is still a long way, so wait to manage well.”  But that day, I was pretty confident because Jasper was there. He’s a super savvy guy, and he knows how to race finales. He’s a rider that everyone trusts, so I left the bulk of this job to him. 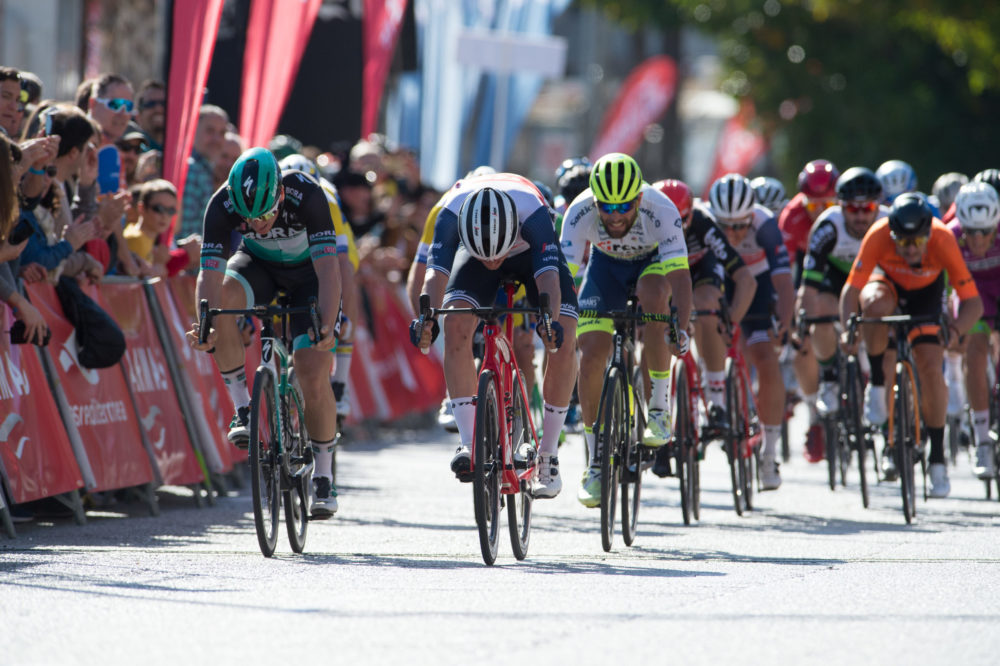 Matteo Moschetti sprints to his first pro win ahead of Pascal Ackermann.

I started my sprint with 200 meters to go after Jasper did his turn, and after Emīls did a great final lead-out: he was in the wind for a while, accelerated, and I felt the speed was perfect. I was in second position and knew I could hold my sprint those last 200m.

It’s not easy to explain your emotions in those final moments. Everything goes super-fast in the last kilometers, then suddenly in the last meters, I feel that everything goes really slow. When you’re in the first position, you’re just hoping nobody passes you. You can’t look behind, but you can hear if someone is coming. It feels like you’re sprinting to a standstill. As soon as you pass the finish line, time speeds up again, and you’re flooded with all these feelings and emotions that only a victory can give you. It’s pure happiness.

I remembered screaming at that moment and putting one arm up in the air. You think about all the training that you did, the crashes, these things cross your mind in a split second, but then you just enjoy your victory. I always focus on crossing the line first and then think about celebrations after. I don’t ever want to celebrate too early and then have a bitter surprise. It was a great day. To see the happiness of my teammates was amazing.

Afterward, when I saw the images of the finish and saw Emīls behind me celebrating and being so happy for my victory, it was emotional. For me, that’s much better than a win. It’s a great feeling when you’re able to finish off your teammates’ great work and deliver a victory.

I hope I can do it one day in the Via Roma in Milano-Sanremo. That is my dream finish line. I’m still developing as a sprinter, but I’ve proven I can be successful in flat sprints but also hard finals with a small climb like the finish in Hatta Dam, where I was second behind Caleb Ewan. Ewan is an excellent example of the kind of rider I aspire to be. He’s versatile and can win finishes on a climb but also flat bunch sprints like on the Champs-Élysées. 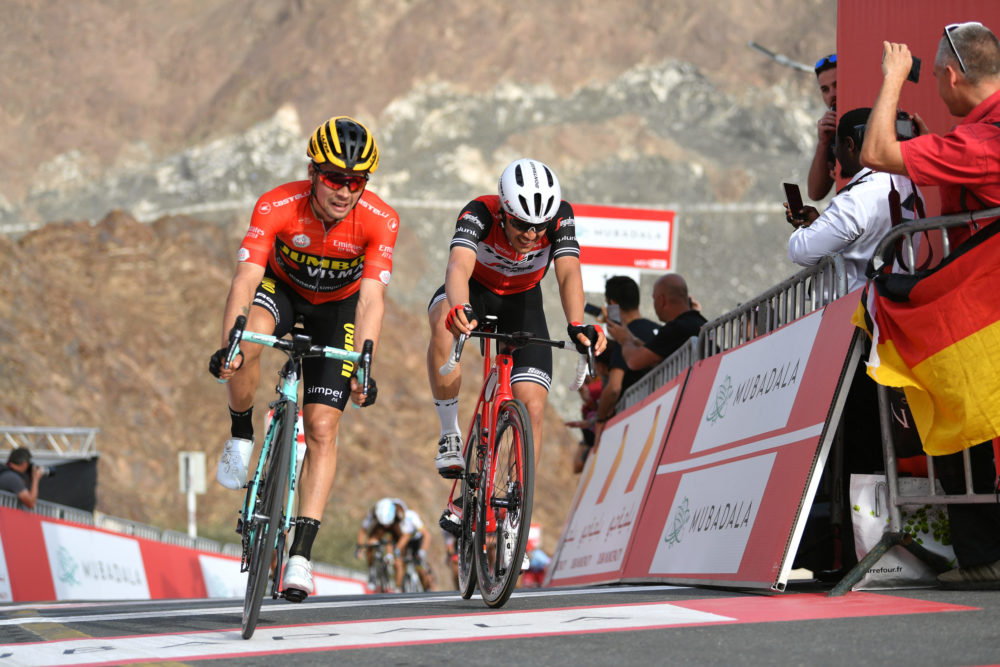 Matteo Moschetti finishes in second behind Caleb Ewan (not pictured) and just ahead of race leader Primoz Roglic (Jumbo-Visma) on the Hatta Dam finish at the 2019 UAE Tour.