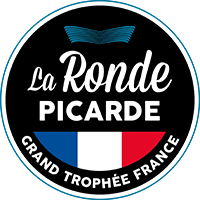 La Ronde Picarde was planned as the last big ride of 2017 and the last little trip away with the bikes. The plan was to do the long 180km route and see if we could tick off Hannah’s first century ride. Taking place in Northern France and centring around Abbeville, La Ronde Picarde would take in a large part of the coast and the Bay of the Somme.

We woke up to the sounds of rain hammering down on the roof of our chalet, which didn’t show signs of letting up during the hour it took for us to get ready. A short gap in the rain was what we needed to throw the bikes into the car and drive into Abbeville, where it started raining again. We walked from the car to the registration point under an umbrella to keep off the drizzle, sorted everything out and began walking back.

The walk back to the car involved walking through the latest really heavy lot of rain, the umbrella doing nothing to keep our legs and feet dry. By the time we were back at the car, our socks and people shoes were soaked through. I’d doubled up on socks so wasn’t too bad but Hannah’s were sodden. Luckily at registration we’d been given some free Cycling Classics France (the organisers) socks so she wasn’t doomed to wet feet all day.

We hid in the car whilst it rained and when it finally stopped 5 minutes before the start we sprung into action. With the bikes built, we rushed to the start just as the first riders set off. Whilst not a closed road sportive, we seemed to have the first few miles all to ourselves. Nursing Hannah through a giant peloton where some people wanted to race off and everyone was finding themselves a group was an experience but managed successfully.

We passed someone already in the back of an ambulance within 3 miles of the start. There hadn’t been any corners to speak of until that point so the logical explanation was a touch of wheels in the melee. Not taking part in the racing part of the event, we were dropping slowly backwards but still overtaking plenty of people. We were amazed at just how many punctures there were. We lost count but it must have totalled close to 50 or 60 early on. Presumably people had put on their super racy summer tyres and the heavy rain had dumped a lot of debris onto the roads.

Promised as a pretty flat event, this first section had quite a few rolling hills, the first of which went up to a tough 15%. We both made it up that without stopping and the subsequent easier hills that only went up to 8%. By this point we’d had some sun and the rainjackets had come off but the drizzle began again before turning into big drops

We saw a little bus stop hut and took the opportunity to hide in it from the rain. We watched lots of people persevering in the rain and ended up staying there for about 35 minutes. Breaking out of our hideaway we were immediately stopped by a man asking for a pump. As we pulled over we noticed that my tyre was squidgy too. I did a quick repair and then began a battle with Hannah’s pump.

I wasted the first CO2 cartridge and gave myself an ice burn. Thinking I’d followed the directions properly and closing the valve fully, it turned out I hadn’t. When I screwed the cartridge in fully, it just released and sprayed me with cold gas, great. Doing better the second time, I managed to get my tyre up with the gas and offered the rest to the man who’d stopped us.

He then proceeded to play with it and release the rest of the gas before he even got it close to this wheel. As we were getting ready to leave, he did the same with another person who stopped and waiting to get picked up to abandon. He wasn’t the only person we saw clearly waiting to be picked up to go home on the ride.

We were now clearly well behind everyone as we didn’t see anyone for a while. We had a bit of tailwind on a section through the Plaine des Moulins, which lived up to its name, and the average speed was creeping up again. When we did see people, they were often overtaking us and going too quick to latch onto. We followed one group across the top of Ault before being braver on the descent and overtaking them into Ault proper.

Riding by the sea

I’d remembered reading one review which suggested there was a short but very sharp climb in Ault. As we descended and made the sea front, we went around a sharp right-hander and here it was. I’d sped up and was in almost the right gear to sprint up to the top. It felt like something out of the spring classics rather than northern France. There was a bench at the top where I sat down and waited for Hannah who’d had to walk the last little bit. Between we smashed down a pack of fig rolls with the sea view.

With the sea on our left and the wind behind us, we found the next section quite quick. The old road to the feed stop village of L’Hourdel passed through the sand dunes which made for some interesting surfaces. We could tell that we’d been really slow up to this point because the feed stop was being packed away.

We helped ourselves to some bits and then Hannah went to the toilet. I declined to go in once I’d heard what it was like. Someone had severely missed the toilet bowl with a number 2 and someone had subsequently walked through it in their cycling shoes as there were cleat shaped marks everywhere. Whoever did It must have an unfunny sense of humour.

We soldiered on, the decision now made to do the shorter Medio Fondo route of 128km. This meant we only had about 20 miles or so left to complete. There were a couple of hills, but generally the route was flat and rolling. We came into a village when we though there was just over 5km to finish to find that actually there was 15km. We started following the route when I decided that it’d be easier to stick to the original undiverted route.

Ignoring the Road Closed signs, we soon saw why it had been diverted. The road had been fully lifted up and was just packed gravel now. We pushed on regardless, doing a bit of cyclocross and chopping the extra bit of route off. We were now entering the finishing village and we started to see riders who had already finished that were heading back.

One guy overtook us and I was given the green light to chase him down in the last kilometre. He must have been knackered because not only did I catch up with him, but so did Hannah. As we rounded the last few corners, I encouraged Hannah to go for it and beat him. She went past him and as I was doing so I experienced a sharp pain on my right bicep. I looked down and saw a bee sat there. Quite why it had stung me instead of just flying off I don’t know. I knocked it off and saw that the stinger was on the outside of the base layer I was wearing so blew that away.

I took the last corner quicker than Hannah so we were neck and neck heading towards the finish line. I pulled alongside and gave her a push so that she finished ahead of me. We picked up our medals, our times in our categories being good enough for Hannah to get a silver medal and me a bronze. We claimed our free post-ride food, had a beer or two and toasted the ride. Despite not making the full 100 miles aim, Hannah had still done her longest ride to date, a personal best always worth recognising.