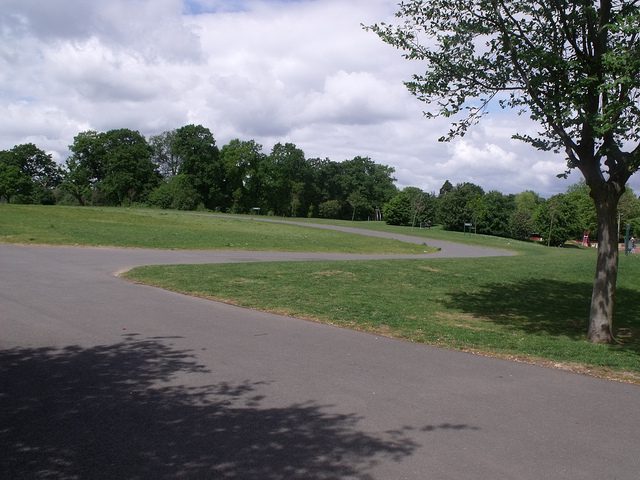 A relatively quick turn around between races this time and heading back to Solihull only a few days after racing there.

This race in Solihullwas a new experience, racing with higher categories – around 40 riders raced across three different categories, I was very much the small-fry in this race with not many 4th Cats apparently giving this one a go.

To get things off to a bad start, I realised in the queue that I’d forgotten my race licence and potentially couldn’t race. Luckily however I remember I’d taken a clear picture of my race licence to show it off and had it on my phone. Quick check later of the massive screen on the phone and I was ready to go.

From the off it was clear that this sort of racing at Solihull was completely different to what I’d experienced a couple of days before. People immediately went off hard and I found myself following someone who didn’t take the corners hard or fast enough but also couldn’t get round due to the strong winds. The end result was being dropped very early into the hour long race.

Two other people ahead had also been dropped and I put in a long turn to create a group of four. We carried on, the winds making us progressively slower and eventually conceded two laps to the main field. I had a few goes on the front where after a lap of effort the other three would drop back making it pointless – I sat on 4th wheel waiting for the bunch to come back round again. We’d probably spent 20 minutes of the race together as a four and another 15 as a five as another rider was caught.

When the bunch came round again, it was missing a group of 2nd Cats who’d raced off the front and after making an effort I managed to get attached to the back of the bunch. I spent the final 20 minutes of the hour long race racing around on the back of the main bunch and eventually finished there, albeit 3 laps down. Definitely a learning process racing in Solihull.

Naturally I didn’t feel great about the result having been lapped 3 times, but did learn a lot from it. Mainly that some races start very quick, especially with non-4th Cat racers in them and some wheels are better off not following. The 20 minutes I did spend with the bunch of primarily 3rd Cats showed that I could hang with them with the right positioning. I outsprinted a few too for good measure, being 3 laps down it was somewhat irrelevant though.

This definitely turned out to be a learning experience rather than a race for me. With the wind being as strong as it was that day, it was essential to stick in the bunch – as it was I didn’t come last, the other 4 riders I’d been with all finished behind me as they weren’t in the finishing bunch.

35th out of 40 on the Solihull circuit sounds pretty bad but there are positives!