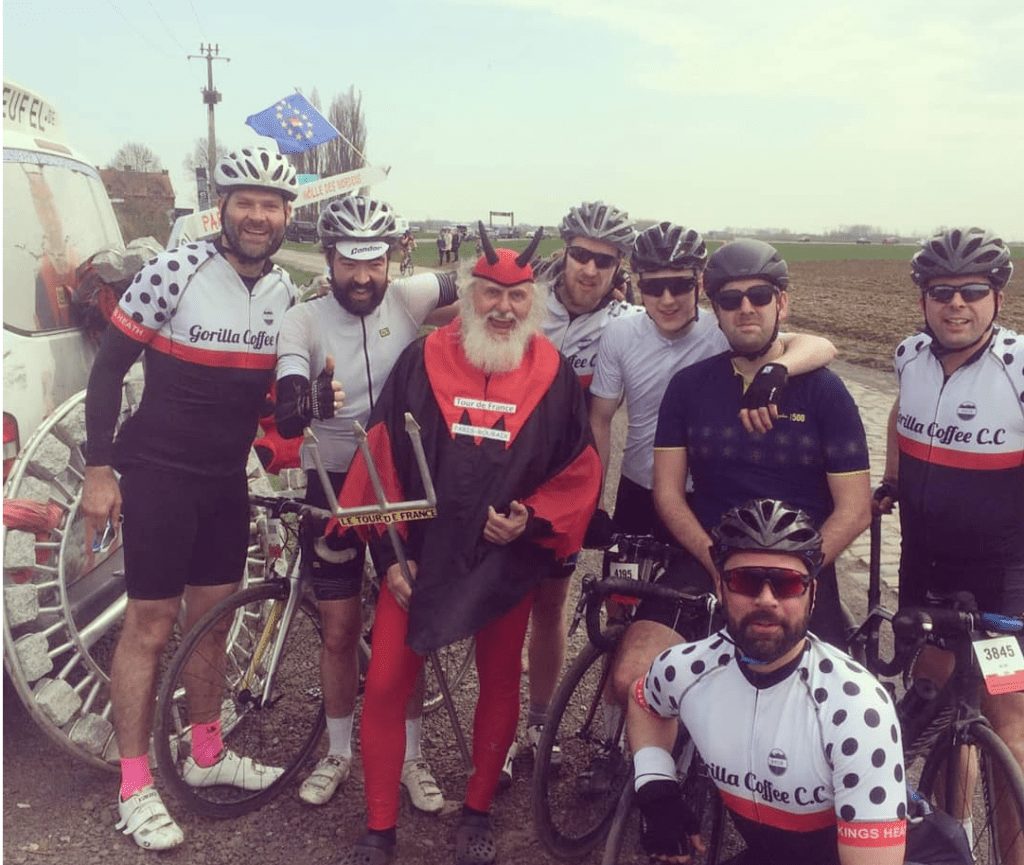 I rode Paris Roubaix once before in 2013, it was…interesting. I ended up riding a route of my own after puncturing and needing to chop off a corner to catch up. A group of friends suggested riding it again this year and wanting to banish the demons of 5 years ago, I said yes straight away but inside I was hesitant.

We all headed down to Lille on Friday night and got ourselves settled into our Airbnb ready for the next day. We’d all got different bikes and different set-ups – I’d tried to pass on advice from my previous experience to those that wanted it. I personally had gone for a 25 width tyre in the front (the widest tyre that would fit) and a 28 on the rear for maximum comfort. They had latex tubes in them which are a bit more puncture resistant, especially over rough surfaces. I’d also double taped my handlebars with a gel pad in between the wraps too. The final thing was putting some plaster tape over each individual middle knuckle on my fingers to help stop them knocking into each other. I knew it’d still hurt, but at least I’d mitigated some of the issues. For good measure I’d smashed a pedal whilst doing a recon ride the week before in a cobbles crash – I was hoping not to repeat that!

We had a 10 mile cycle to the start, signed on and got our rider numbers. James had forgotten to sign up until the event sold out, so I gave him the number I was supposed to wear on my back and I attached the main number to my bars. The number, it turned out, was printed with the nicknames we’d provided on the online registration – Finn had been creative and called himself ‘Big Dick’, by giving himself that name, he was correct. In fairness to him, we did also see a girl called ‘Poo Face’ on hers much later on – I feel she didn’t choose that nickname.

We headed off, rolled out of Roubaix together and straight into a strong headwind that would last for all of the first half of the ride. After skirting past lots of randoms, we ended up sat on the wheels of two guys. Being hidden from the wind we were relaxed, chatting loudly and generally messing around. These two guys ended up riding with us all the way to Roubaix in the end, enjoying our banter and our willingness to help them out in the wind as well. Our new German best friends Karsten and Jens proved a useful addition.

We had a couple of incidents before getting to the Arenberg. Graeme managed to hit the deck after getting squeezed against the kerb and James managed to do a flip off his bike but didn’t nail the landing when a car came round the corner as we were overtaking slower riders. Graeme was missing some skin but James had no visible damage. Shortly before the Arenberg we stopped to let some air out of the tyres as the first part had been all tarmac and the second part would be made up of lots of cobbles. We’d also had the full Paris Roubaix level crossing experience by this time, having to wait for a train to go past – no-one decided to chance going under the descending barriers though.

The first part of the Arenberg had been barriered off as the recent rain had made it too muddy for us mere mortals to ride. We were shown up the path before eventually being let onto the road proper. Immediately it was awful. The mud meant the back wheel was squirrelling around and I wasn’t in control. I crashed on this sector last time I was here, wasn’t confident, couldn’t get past slow people and came to a complete stop. I ended up squeezing under the rope barrier and using the footpath instead, a nicer solid mud and much safer for me. Near the end however, a French marshall stopped me, tore off my number and gave me a tirade about something. Great!

Everyone else in the group rode the cobbles, so I received a little gentle abuse. On the second set of cobbles, with something to prove I smashed it. It must’ve been an easy sector as I averaged 22.1mph, far too high surely! Strava reckons I managed the 579th best time of over 10,000 riders though. Due to the amount of cobbled sectors they begin to merge into one in the memory. The group began to have its first punctures on the next sectors. Joe ended up with 4 punctures within a couple of sections of pave, Ben joined him with 2 on the same sector. We ended up waiting for close to 40 minutes for them all to get off the cobbles at Warlaing so we could continue. They weren’t alone so it wasn’t too bad, but none of us who had finished unscathed wanted to ride back onto the sector and feel the hurt again!

Along the next stretch I saw a couple of Stratford jerseys up ahead, whilst passing I said hello – turned out it was Steve and Ian, who I didn’t know were doing the event. Just like Flanders, it’s mad how you can accidentally find people you know amongst thousands of others. One section proved to be truly difficult – Mons en Pevele. The slight rise, the amount of people to get past and the head/cross-wind made it impossible for me to keep up the speed on the second 5 star rated difficulty sector. I felt like I was blowing hard, the heart rate was sky high and the legs weren’t wanting to play. I struggled to the end where some of the others were already waiting. Ben had had enough of the pain of his wrists falling to bits, a makeshift solution was to tie some arm warmers tightly around them which got him to the finish. By this point I’d also made it further along the route than I did in 2013, it didn’t look like I was going to pay a repeat visit to Belgium or have to rely on the kindness of strangers.

The flatness of the tarmac roads between the cobbled sectors meant we were flying between them before subjecting our hands and arms repeatedly to being beaten up as the surface changed back. We gradually made it to the final 5 star sector of Carrefour de l’Arbre. This is where I’d managed to fall off and smash a pedal the week before, not being confident, feeling tired and broken a bit mentally, I agreed with myself to take it easy here. I was riding in the dirt at the edge of the road when I saw the massive puddle I’d tried to avoid the week before when crashing – I was going to get another shot at doing it better. Thankfully I nailed it and we didn’t see a repeat performance. Just round the corner I found a rider had clearly just come off as he was stood up, off his bike in the middle of the cobbles talking with his friends. I was able to skirt past using the dirt on the inside and not add to the mess.

At low speeds and without any real smooth dirt sections to use, this was a truly tough, long sector. A tiny strip, only an inch or two wide, that kept switching sides was the only area of redemption. On the final stretch I came across a rider on the floor, it was Joe who had fallen off, cramped up whilst on the ground but he said he was alright when I asked. The next stretch was Gruson which had a familiar face on it, Didi the Devil of Tour de France fame was there, so we pulled over and had our picture taken with him. It was also an easy sector, with a very wide verge to ride in and we were able to avoid the cobbles. The final stretch of cobbles was spent using up some of the last reserves of energy to get it over and done with. A big mental block was lifted as a group once we knew we’d defeated all of the cobbled sectors.

The run back into Roubaix had an interesting switchback pedestrian ramp that we all got through, except Ben who cramped up and had to walk up it. Back on city streets, the traffic got noticeably busier. On the run in I picked the speed up and disappeared off the front – I wanted to ‘win’ out of our little group. The years of commuting through Birmingham helped massively in negotiating the standstill traffic in the last 2 kilometres. Taking the swooping turns into the road to the velodrome, a rider overtaking me decided to start putting his arms up before the velodrome for no apparent reason – brushing my chest in the process and giving him a wobble.

Entering the velodrome proper, I was determined to go up to the top as I only went halfway last time and ended up flying around the top of the bend before swooping down to the finish line. I got my medal and ended up waiting for the others – James even managed to get himself a medal using my number, strong sportive pirate skills. We settled in for a chilled out time sat in the sun on the central grass of the velodrome with some well earned beers and burgers. We compared injuries – everyone had some sort of scratch, blister or bruising, hands in particular took the brunt of the battering. Some of us had some pretty impressive lobster tans from the first day above 20 degrees this year – but not those of us blessed with some Australian genes in them!

After the last time, I wasn’t convinced I’d ever put myself through Paris Roubaix again. I’m glad I did though, it was good to be able to smash over some of the pave sectors much much better than last time and exorcise some demons.