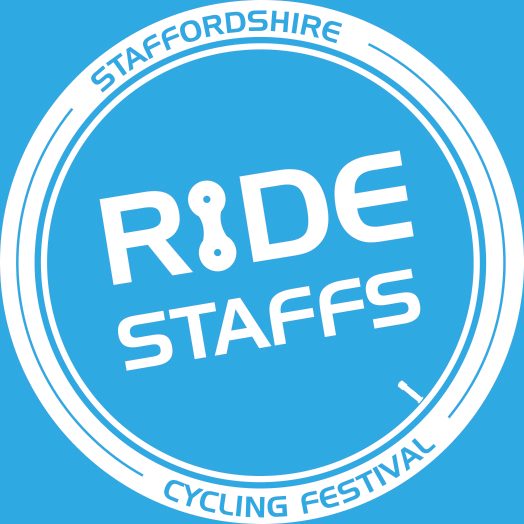 The Ride Staffs sportive took place on 2nd July 2017. Starting from Chillington Hall, a large country house between Wolverhampton and Telford, riders were sent on their way for 70 miles around Staffordshire. This was my first sportive since the recent Dragon Ride and the main goal was to ensure that Hannah made it round her first 100km ride.

We turned up at Chillington Hall and were pointed to a field to park in. The bikes were pulled out of the car, put back together and whilst I enjoyed riding over the grass and stones, Hannah was more sensible and chose to walk to the start. We were put into small groups which were released a couple of minutes apart, rather than having one massive peloton working its way down the country lanes. We set off together and out of the estate.

The beginning was very nice and gentle, with rolling terrain and no dramas. Every now and again some fast boys would tear past and we found ourselves overtaking others as the positioning began to sort itself. Hannah nearly fell victim to a rider who had a very high-end bike but apparently no group riding skills. He’d been hitting the brakes needlessly around the slightest bends but then full-on hit the anchors on a straight with no warning to pull in. Not helpful!

After 15 miles or so, we came to the first climb of note. A long drag up from XXXX saw us overtaken by a group of club riders with a young guy gamely keeping up with them. We’d gradually reached our way up and over to some traffic lights, only to then have to turn left and pretty much repeat the same level of effort up another climb. Luckily neither part of the climb was too steep so it was a case of finding a gear and maintaining a steady cadence. We had a breather in a junction at the top before continuing.

The upside to going uphill, is that you’re bound to get a downhill at some point. This was a fun long one through the trees of Cannock Chase, lots of wide open bends, good road surface and the odd mountain biker crossing the road. The extra weight I have over Hannah meant even without pedalling, I found myself rolling quicker than her, but I was good and waited at the end of the road.

The first feed stop was shortly afterwards, at a local plonk shop. I nearly convinced myself that I wanted a beer, but couldn’t see any cold ones in a fridge until I was half out the door and had talked myself out of it. We stocked up on chocolate, biscuit bars and the odd banana before sitting on some steps outside. We observed the many different types of riders taking part, including a version of the classic ‘I don’t want to hold you up anymore’ (which really means ‘you’re going too fast’) from wife to husband.

We had our first mechanical whilst trying to get up a steep little hill when Hannah’s chain fell off. Typically this seems to happen on the same day you put oil on the chain, ensuring that you get covered in it. I put the chain back on and gave her a Tour de France mechanic style running push start before hopping back onto my bike. Generally the ride passed without incident until we reached Uttoxeter and the halfway mark with one exception.

We’d caught up with some riders who were going at roughly a similar pace if not a touch too slow for us. I’d started riding no handed to straighten up my back a bit and Hannah was joining in too. We came to the bottom of a drag of a hill and I shifted down a gear or two but stayed riding no handed. I was trying not to pass the group of guys in front, but as arrogant as it’ll sound, I couldn’t go slow enough! I ended up overtaking them on the hill, whilst messing around with the hands off the handlebars. I’ve been reliably informed it looked entertaining from behind.

The second Ride Staffs feed stop was at a coffee shop and provisions were simply a camping bag of water to fill bottles from (I’m sure that has a better name for it). I went inside to buy a coffee, only to find I’d left my wallet in the car and Hannah knew hers was in the car. For attempting to buy a coffee I was given a large slice of flapjack, which wasn’t obviously on offer from the outside. We sat down and shared it before heading on.

The road from Uttoxeter to Stone was the toughest part of the ride with 10 miles of downs and ups with at least 4 solid climbs thrown in for good measure. We found ourselves on our own after awhile plodding on. The last of the climbs was the toughest, a long drag that kicked up to over 10% gradient towards its end. Having worked her way through all her gears, I saw the hopeful ‘maybe there’s one more gear left’ shift from Hannah and decided now was the time to engage what has come to be known as the ‘Mat gear’ (also seen in the Dragon Ride video). Riding alongside with my hand on her back, we managed to crest the tough climb together without walking.

We dropped into Stone and had a breather, lying on the grass watching other cyclists pass by for 10 minutes or so. I also took the chance to film a bee on a flower nearby on the GoPro. With hills now done with, we had the final long flat stretch back to Chillington Hall. I feel like we just plodded on here as I don’t remember much and think we were largely on our own for it. We were working to a goal of not being caught up by some riders, which we managed. By now we’d already done Hannah’s longest ever ride and the final hills proved hard work but just about manageable. Eventually we came to the edge of the estate for the last mile or so of Ride Staffs, which was…interesting.

For some reason, we didn’t go back onto the estate the same way we’d gone out. The road chosen for us was a combination of mud, shale, gravel and bits of tree. I quite enjoyed myself, cycling fast over and around the obstacles but online reaction I’ve read since says most didn’t. For the majority of people on the Ride Staffs sportive, they won’t have used their nice, fancy road bikes to ride on such stuff before (because they sensibly stick to roads). As such it was a needless test of bike handling, particularly for novice riders and presented an increased puncture risk (we were fine, others apparently not) so close to the finish. This finishing road seems to have been universally savaged and I’d be surprised if it was used again.

Once over the finish line, we exchanged a beer mat from the Ride Staffs goody bag for a local beer and sat down to watch some of the Tour de France stage on the big screen that they’d put up, which was a nice touch. We sat for awhile and basked in the sun before making a calculation that we could get some food and get home before the stage finished. We had a drive-thru Maccies, which I’m pretty sure Chris Froome also has when he finishes his long rides.