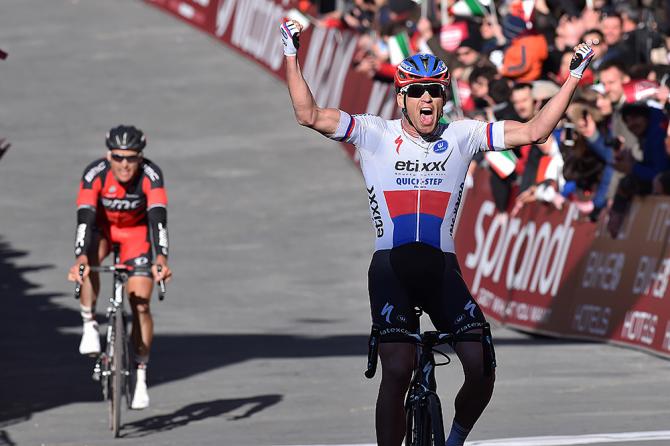 Strade Bianche is Italy’s version of a Spring Classic and a relatively new addition to the calendar. It takes place on regular roads with gravel tracks thrown in to make things interesting. The race gets its name from these sections as the white roads give it a distinctive look.

The race suits punchy one-day riders, with a climb in the last 1km of 9% peaking at 16% before a quick drop to the finish, it requires contenders to be relatively light rather than just powerful. It’s this climb that has seen Sagan come second twice in the last two years whereas a flat finish would see him walk it.

2015 sees a strong field line up at the race. Two-time winner Fabian Cancellara will be aiming for a third win, one-day race king Alessandro Valverde will be racing and Peter Sagan will aim to go one better.

There is a lot of strength in depth aiming for a win too. Omloop winner Ian Stannard will race, although the final climb may not suit him, so will Niki Terpstra who was one of the Quickstep triplet that allowed Stannard to win.

Greg van Avermaet and Vincenzo Nibali race despite off the bike problems, and Sepp Vanmarcke will fly the flag for LottoNL. Simon Gerrans returns after breaking his collarbone to start his season and Carlos Betancur starts his European season for AG2R.

For those looking for a more left-field option for a good result, Sonny Colbrelli for Bardiani always seems to do well in Italian races like this, Adam Yates can do well and is suited to the final climb but his finish will depend on how well Gerrans does. Peter Kennaugh can also do well if released from Sky teamwork duties.