The cold and rain were the protagonists in the XX Balmasedako Emakumeen Saria, the fourth round of the Cofidis Women’s Spanish Cup after Beasain, Pontevedra and Noja with almost 400 registered cyclists.

Our runners did a great job and proved their worth in a race with a winding layout that left little room for showmanship. 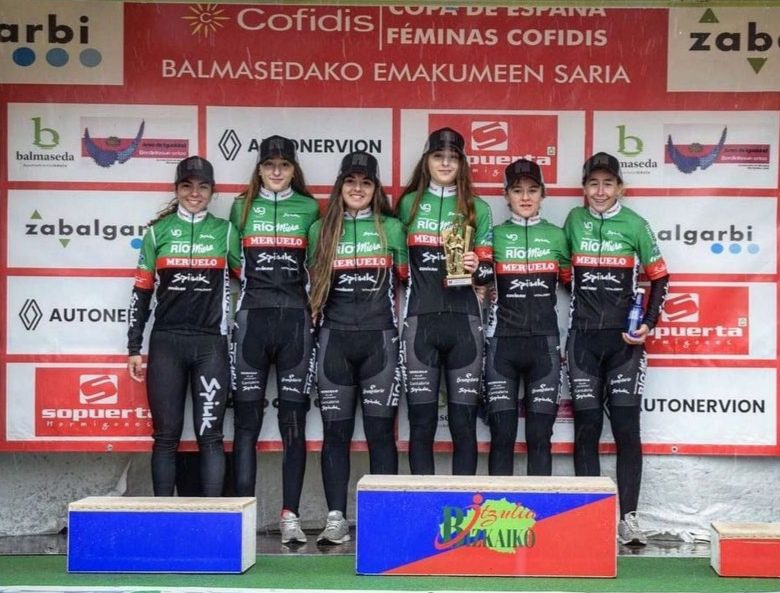 The junior runners had a 66-kilometre race, highlighting the ascents to Abellaneda and Beci. On one of the final climbs, Andrea Velasco made a great move that allowed her to gain a few valuable seconds to enter third at the finish line and thus achieve her first podium finish in the Spanish Cup. Her partner Carolina Leonardo was fifth, while Marta Beti finished in tenth place, thus granting her team a more than deserved team victory to the Río Miera-Meruelo-Cantabria Deporte.

In the cadet category, they faced 41.8 kilometres on the route meter with three ascents to Otxaran. Despite an early fall, our cyclist María Filgueiras was able to continue in the race and based on effort and courage, the Galician was able to finish in a phenomenal fifth position at the finish line.

A total of 92 kilometres faced the elite/sub-23 runners in Balmaseda. The mountain was the protagonist with the climbs to Otxaran, Abellaneda and Beci. In a race that was very busy from the beginning, the runners of the UCI Río Miera-Cantabria Deporte team tried from the beginning. At the finish line, Carolina Esteban achieved a valuable top 10, finishing in ninth place, after a very tough day in terms of weather, with only 31 runners finishing, including Susana Pérez.

Aida Nuño, Sports Director of the team, ends “happy with our performance. The weather has made the races very hard and it has not been an easy day for anyone. In junior we have achieved the team victory and a great third place for Andrea, in cadets María has recovered from a hard fall and has finished fifth, while in elite/under-23 Carolina has fought with all her might to reach the top 10. We continue in the process of growth”.

The next appointments of the Cofidis Women’s Cup of Spain will be on Saturday May 14 with the II Bajo Andarax Trophy in Viator, Almería, and on May 15 in the I Santa Ana Abanilla Residence Trophy in Murcia.