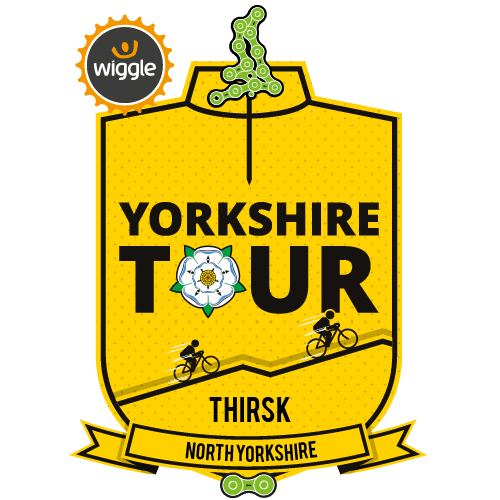 I was supposed to be going on holiday cycling from Berlin to Copenhagen for a week but because of Ryanair refusing to take the bikes onboard, I was suddenly free. Hannah had signed up for a cheeky weekend in Yorkshire with a 100km Wiggle sportive out from Thirsk. I got an invitation to tag along.

The Wiggle Yorkshire Tour started at Thirsk racecourse before going on what is possibly the flattest route possible for a Yorkshire sportive. A quick cursory look at the route map showed that I had done some before, a little 2 mile stretch of road right at the top close to Reeth. This was another one of the warm-up events working towards the 180km La Ronde Picarde that we would both be doing in early September.

We turned up at the racecourse to start, the freshly mown grass of the car park managed to get itself everywhere. It stuck to the bottom of my shoes to such an extent that I wasn’t able to clip into my pedals. A little hop-off was necessary to pull it all off and then we were good to go.The first part of the course was particularly flat and gentle. We got ourselves onto the back of a couple of groups and drafted behind them for as long as possible. Every now and again I was given the nod by Hannah if a group was going particularly gently and she wanted to go faster.

Before we knew it, the first 20 miles were done. We pulled up at the first feed stop, lots of bikes leant against everything possible and collected our handful of goodies. I had a Powerbar gel which tasted absolutely awful – like pure salt. The Powerbar wafer things were awesome though, something I would just happily eat off the bike too. We were just about to get back onto the bikes when the bike next to me fell over on its own. I tried to catch it before it went but grabbed air. I did at least pick it up and put it back where it had been.

The next section was tough. It was very very gradually uphill for around 15-20 miles. Something like a steady 1-2% average all that way. The worst bit however was the strong headwind which made it feel double that. Lots of people were passing us on some of the long stretches as what was needed was pure power. The wind was taking its toll though, we had to have a stop and some reassuring was done with promises that once we made the turn in 10 miles, everything would be easier.

Coming out of one village we had the first proper short steep climb followed by a really long drag to the actual top. We kept things steady but close to the top the road was a bit more exposed and the wind was brutal. We also had the added drizzle making things even tougher. Eventually however we made a descent and then finally the turn.
We hammered along a 1-2% descent with a huge tailwind. One where you get up to speed and then are just able to keep it up. The weather also improved and so did our spirits. We did eventually have to slow down though, it was feed station time in Wensley (were we in Wensleydale?). More wafers and a sit down in the sun.

We set off onto the final next stretch, Hannah was rolling very nicely, overtaking quite a few people and then getting the ‘Mat gear’ on the hills. We had a couple of little stops but it was a largely flat run back into Thirsk. The wind had taken its toll and the miles were ticking over slowly but we made it to the finish together and got our finishers t-shirt and medal each.

We had fun using the Muc-Off bike washing stand, some accidental light spraying of each other when the hose heads popped off the ends of the hose. Either way we had some nice clean bikes to put back into the car. Just about to head off and we saw a guy on a Brompton fold-up bike zoom past on his final few hundred metres. He’d done at least the same 80 miles we had on that little thing – very impressive!