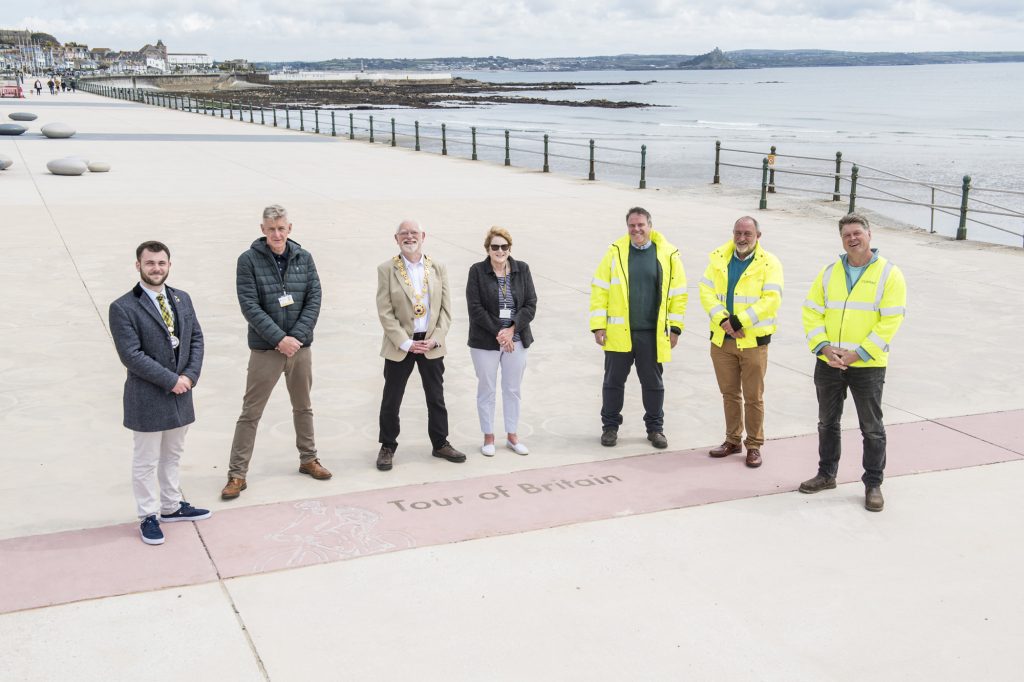 With 100 days to go until the Tour of Britain 2021 departs from the town, the major refurbishment scheme of Penzance’s Victorian promenade is now complete and ready to welcome spectators for the start of the Tour of Britain 2021.  The refurbishment is a key part of Cornwall Council’s ambition to provide a cycling and walking trail, connecting Penzance to St Erth, Hayle and St Ives.

Stage One on Sunday 5 September will set off from Penzance Promenade heading through St Just, St Ives, Hayle, Camborne, Pool, Redruth, Falmouth, Penryn, Truro, Newquay and St Austell before the finish in Bodmin after 180.8 kilometres (112.3 miles) of racing.

While it may be the first visit for the modern Tour of Britain to Cornwall, this week also marks 29 years since the Milk Race – a semi-professional forerunner of the Tour of Britain – began in Penzance in 1992.

Councillor Linda Taylor, Leader of Cornwall Council, said; “In addition to showcasing Cornwall as a cycling destination, the Tour of Britain brings a fantastic opportunity to promote to our community the many benefits getting on a bicycle can have, from living healthier lives, helping with our wellbeing to caring for our environment.

“The refurbishment work which has just been completed on Penzance Promenade is a great example of the long lasting legacy projects associated with this event that the Council is leading on that will benefit our local residents and visitors.”

Cornwall Councillor for Penzance Promenade Division, Jim McKenna said; “The Tour of Britain will provide a huge boost to our local economy and is likely to be the biggest event in and around Penzance for many years. The town is hoping to host a ‘festival of sport’ over the whole weekend, to try to involve as many residents, young and old, in both organised and casual activities, culminating with the ‘Grand Depart’ on the morning of Sunday 5th September. Particular thanks to the event organisers for honouring their pledge to come to Penzance – 100 days and counting, can’t wait!!”

Penzance Town Mayor, Cllr Jonathan How, said; “We are very excited to be hosting the start of this internationally acclaimed sporting event right on our doorstep! It is a brilliant opportunity to show the rest of the UK what we are doing to provide improved facilities for cyclists and the partnership working that has been going on behind the scenes.

“The event will hopefully create a long-term legacy by placing the spotlight on cycling and tie in with the with €2.8m investment, announced in the autumn of last year, to improve the Mount’s Bay coast path.”

Race organisers SweetSpot are currently working closely with Cornwall Council, Devon & Cornwall Police, and other stakeholders to minimize disruption for residents and to provide clear communications to ensure that the event is enjoyed by everyone.

The Tour of Britain operates a rolling road closure to keep disruption along the route to an absolute minimum, with roads usually closed for less than 30 minutes as the race passes through.  More information including a video can be found here.  Detailed timings for the whole of the Stage One route will be published in early July.

“After such a long wait to now be within 100 days of bringing the Tour of Britain to Cornwall and Penzance is hugely encouraging for us,” said Race Director Mick Bennett.  “This year’s edition is going to be a highly memorable Tour of Britain for so many reasons, not least the route taking us from the south west of England right up to Aberdeen in the north east of Scotland.  I am looking forward to being on Penzance Promenade on 5 September with over 100 of the world’s top cyclists, including of course a Cornish team in Saint Piran.”

Among the teams already confirmed for the Tour of Britain are the Cornwall-based Saint Piran squad who will be making their debut in the race.  Commenting on the news Helston’s Steve Lampier who has ridden the Tour of Britain on five previous occasions, said;

“The countdown has begun. 100 days until the most exciting day of my career! Having been dreaming of the big races since I was a small kid riding around Cornwall to now having the world’s best on the roads. It is amazing to think about.

“I now have a solid build up with lots of European races planned to get me and the team in the best shape for what will be a hard day and race. This will be an event not to miss as Cornwall gears up to welcome the biggest ever sporting event ever to be held in the Duchy.”

The last time a major cycling event came to Penzance was 24 and 25 May 1992 when the Milk Race began with a prologue in the town followed by a team time trial between Land’s End and Penzance.  Though he would go on to become the only Irish overall winner of the Milk Race a fortnight later, Conor Henry got his campaign off to a notorious start by crashing on the time trial start ramp in Penzance.

Unlike in this year’s Tour of Britain, riders headed from Penzance to Bodmin by car for the second part of a split-stage on the Bank Holiday Monday 25 May that saw them racing out of Cornwall from Bodmin to Bideford.

Following the opening stage in Cornwall the 2021 Tour of Britain will head to Devon for a second stage between Sherford and Exeter on Monday 6 September and then north via Wales for six more thrilling days of racing to Aberdeen. Both Wales and Scotland will host two stages of the event, while seven of the 12 start and finish venues announced to date – Penzance, Bodmin, Sherford, Warrington, Hawick, Stonehaven and Edinburgh – are new to the event.

The full routes of all eight stages of the Tour of Britain – including ŠKODA King of the Mountains and intermediate sprints locations – will be announced in the summer. ITV4 will continue to broadcast live flag-to-flag coverage of every stage, as well as a nightly highlights show, allowing fans in the UK to watch wherever they are.