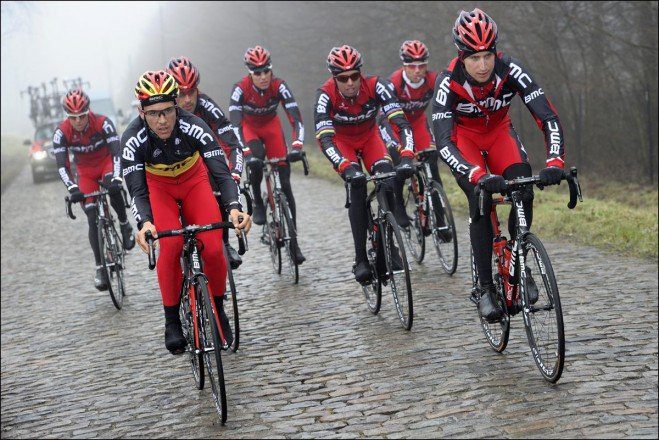 Each year sponsors in pro cycling change around and teams have an influx of new colours to work with in order to make themselves stand out. It seems dark colours and black in particular is still in vogue, a modern trend started by Cervelo-Test Team in the 2009 season, which helps make those who don’t pick black much more identifiable (such as Lotto’s red).

Here’s a round-up so you can get learning in time for the Spring Classics.

Ag2R have kept the same kit again this year, it’s universally one of the least popular kits and probably doesn’t sell too many replica jerseys. The light blue combined with what’s a very dark brown make it unique amongst the peloton, if not very exciting.

Astana continue their variations of a team jersey with a light blue and yellow theme. Admittedly when you’re a Kazakh team and those are the only two colours in your flag, there’s only so much you have to work with. A change of font and less other Kazakh state owned advertising makes it look cleaner this year.

I think there’s a slight difference on the black shoulder area compared to last year but to the casual viewer it’s pretty much the same as last year’s team jersey. Significantly more red than black makes them easy enough to see in a group.

OmegaPharma have decided to use this year to advertise their Etixx sports nutrition brand (harking back to years past where they used Predictor and Silence with the Lotto team). Less black and more turquoise at the base should help us see their team jersey easier from the front.

FDJ have ditched dark blue and gone for a light blue french flag tricolour style. One of the few teams to have ditched a dark colour for more visibility, should be easy to work out where Arnaud Demare is during the sprints.

New to the WorldTour, IAM Cycling have made no obvious changes to their team jersey, another dark coloured one but the flash of red/white should help them be a touch more visible in the bunch.