Cycling up Snowdon on a Road Bike 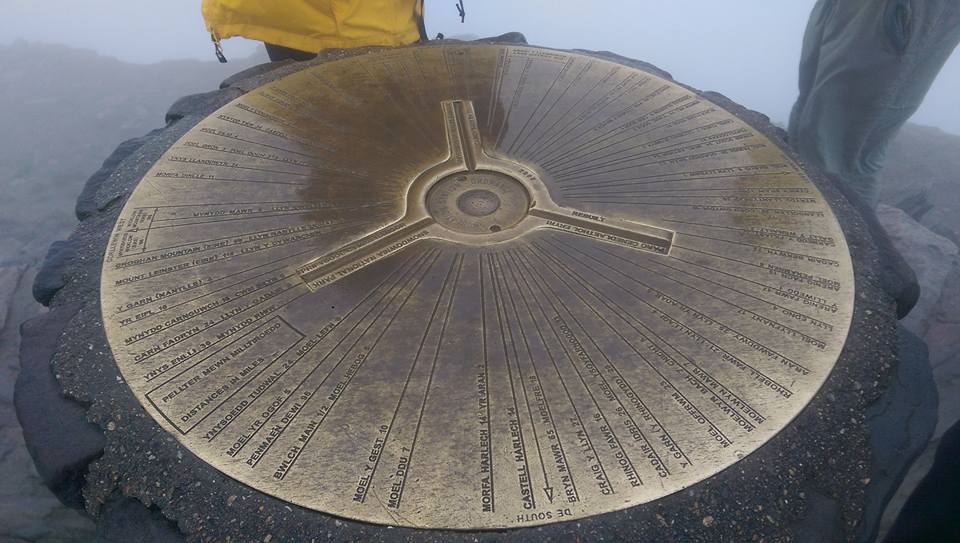 I think it’s becoming obvious that I like to set myself a challenge and see what I can do with a bike. It started with various sportives, then a 200km Audax, then London to Paris in under 24 hours, trips across Belgium and now taking my bike to the highest point in England and Wales, Snowdon.

I first mooted the idea to George in the Spring but we couldn’t find time to do it before the voluntary cycling agreement on Snowdon kicked in – it basically says no cycling between May and September due to safety issues with having lots of walkers on the path and bike flying down it at the same time. Fair enough we thought, we’ll do it later in the year.

In the meantime George found himself moving to Chirk which made preparing and travel a little easier, no longer having to leave quite so early in the day from Birmingham we were able to get up at a sensible time and head up at about 9am. We parked up in Llanberis down a side street, pro tip to avoid the parking charges, got ourselves ready and set off up the Llanberis Path to the summit and our first ever HC climb. 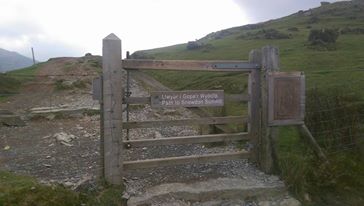 The start of the off-road stuff on the Llanberis Path

The first tarmac section was very steep, I saw 22% on the Garmin briefly, I stayed on but George was forced to walk some of it. We reached the gate off the road which signalled the start of the path and the beginning of the off-road fun. George had a proper mountain bike, front suspension, fat tyres, the works. I was on a road bike with fat-ish knobbly 35s with a very low psi, disc brakes and clippy shoes/pedals.

We ended up going through the gate at the same time as a pair of walkers, we knew if we saw them again before the top that walking was quicker than cycling, as it turns out, we didn’t see them again. The early section was spent getting used to knowing what our bikes and us could handle. I had a couple of very slow instances of falling over, a combination of being clipped in for one and being ambitious the other time. We soon learnt that neither of us were much good on what we started calling giant cobblestones, the gaps between them meant it was too easy to lose a wheel or lose momentum resulting in having to come to a quick stop.

We walked up a few of the short steep slopes with these but comfortably rode the relatively flatter sections with gravel and smaller rocks. Surprisingly quickly we found ourselves within sight of Snowdon’s Halfway House, predictably shut with the Summer season well over. This section was very rideable and posed us no problems. The section after meant we had to walk for around a mile with the bikes. It was steep, had the giant cobblestones and was much too technical for our skill level. Walking up there in clipped shoes and a bike on my shoulder was tough and was probably the only part that caused us both issues physically. 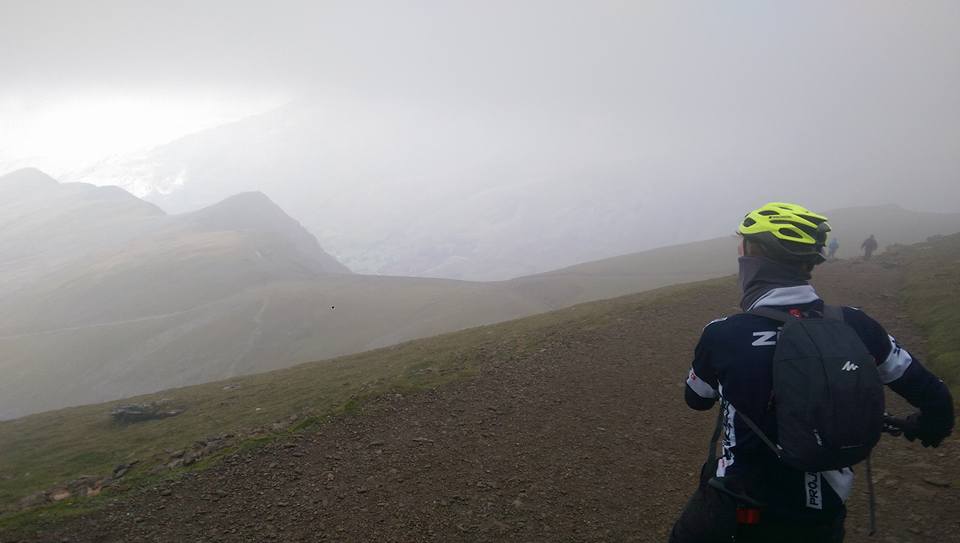 George looking down the Llanberis Path

Crossing under the railway line, we would’ve been within sight of the top if it wasn’t in a bank of cloud. We also lost the wind protection of the bank that the railway sits on top of and gained a close up view of a steep cliff face, probably one of the few points of possible danger on this path. The steepest uphill section was next, the less rocky surface made walking up it easier for me in my cleats, but I also had my bike on my shoulder as I found that easier than pushing a bike up that wanted to roll backwards between each step. Eventually it flattened out a bit and we were able to ride across a lot of the ridge before the path returned to being big rocks with steps built in. On the upside, this was the final stretch up to the summit of Snowdon, with the bike back on the shoulder I was running up some of this as people coming down made comments on how mad we were. 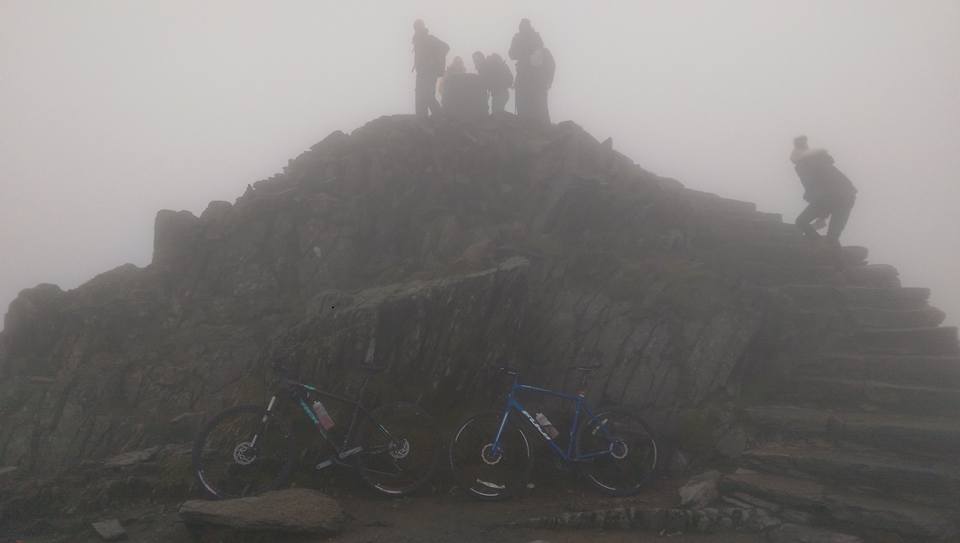 Our bikes at the Snowdon Summit

We reached the summit mound in 1 hour 50 minutes, took a photo or two and then ascended the steps to the toposcope at the highest point. Unfortunately due to the mist it was fairly useless, not being able to see further than maybe 50 metres away. As we did the brief descent to Hafod Eyri, the fairly recently built visitor centre on Snowdon, a party of school children (that had come up on the train) seemed particularly impressed that we were up there with bikes and more so that I had a road bike with me. We went in for a well earnt coffee and flapjack and a bit of a breather – we got many looks from everyone else in there, I guess we looked a bit different! Back on the outside to get our bikes (which we’d locked up, although we’d debated if anyone would really be even able to take them from up there), we ended up in a conversation with some Royal Marines who were doing something equally as daft, climbing up with massive packs as part of a training exercise. 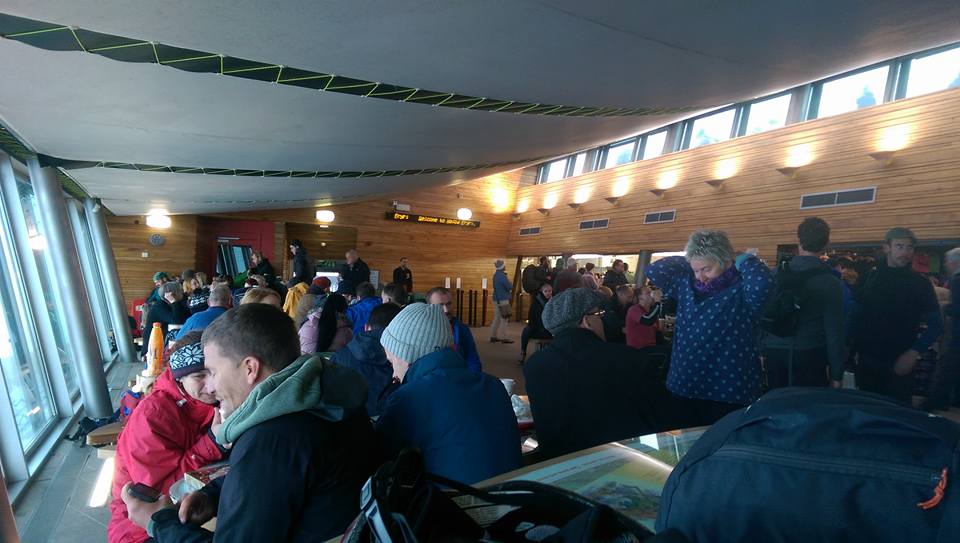 We had to walk back down the steps, not being quite good enough to be able to ride down them, blasted across the flatter section we’d ridden across before until we reached the steep section. I was struggling to hold the bike back even with the brakes fully on and the back tyre was moving around, so I got off to walk. George rode it, but as I watched him descend quickly, his left leg ended up off the pedal and it didn’t look particularly controlled. When I eventually joined him, he confirmed that he’d been on the brakes, locked up sliding around a lot and had definitely scared himself a little. We crossed back under the railway line to an unrideable section that we had to walk down. My cleats didn’t enjoy flat sloped rocks and there were a couple of slippages, one resulting with me throwing the bike on the floor and the other with it stuck on top of me whilst crouching and George having to come help get it off.

Once the big rocks went and the gradient lessened, we were back on the bikes. The steady descent meant lots of riding on the brakes, it was surprising how quickly speed got picked up if you didn’t. We were both smashing down this easier stretch of the path, able to ride down parts that we couldn’t ride up and we were back at Halfway House before we knew it. The road bike with its lack of suspension wasn’t finding it too hard going, being able to pull the front wheel up and over the bigger rocks meant it was the back wheel and legs taking more of any hits that happened. Eventually the back wheel hit a rock a little too hard and we had to stop for a puncture. Being a seasoned veteran at replacing these, we were done in 5 minutes and back riding. 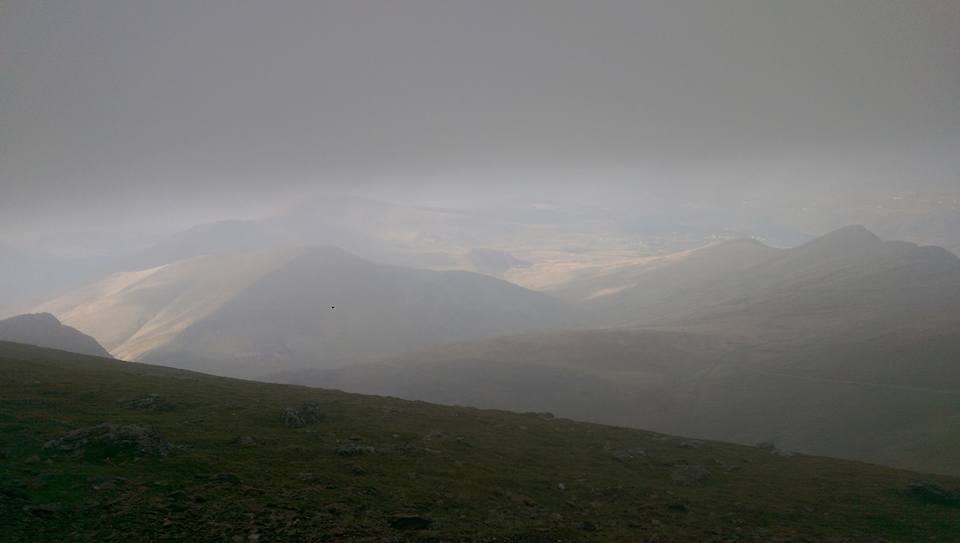 The view on the way down the Llanberis path, almost out of the cloud cover

We were friendly and courteous to all the walkers, passing them slowly and with a nice shouted warning to let them know we were there. Everyone was kind back, definitely impressed at our efforts or the madness of them. Near the bottom where the path started after passing a small group on a particularly jagged section, I’d just got off to hop down it when I looked up and saw George’s back wheel was a metre or two off the ground, somehow he didn’t faceplant but managed to push it through his legs and just sort of walk off it as his bike hit the deck behind him. Dusting himself off, we we were able to make the short distance back to the starting gate and a fun descent on the tarmac back into Llanberis for lunch at Pete’s Eats.