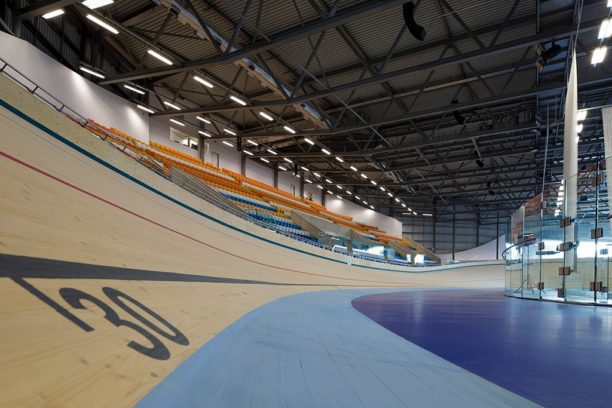 I’ve been wanting to have a play on a velodrome for awhile, especially after going to the World Championships last year. I did have some worries however. Riding a bike without brakes removes one safety net and the banking, which always looks massive when you’re not on it. When we got to Derby Velodrome and saw it for the first time, it looked huge. Having built myself a fixie in the past to ride, the concept of having to ride a fixed gear bike wasn’t a problem.

Preparation for Track Cycling on the Velodrome

The opportunity came up to take part in a taster session through my working in the civil service. Their sports club had arranged a session for civil servants (and friends/partners) to come have a go at Derby Velodrome and get put through their paces. I’d brought all the gear I needed – proper cycle kit, a helmet and some mitts. A mild annoyance is that the track bikes provided used Look Keo pedals, which don’t match my own Shimano SPD-SL shoes. In reality though, the shoes you can hire (for £5.60) were more than good enough so it wasn’t an issue.

We pulled a track bike off the stand each, gave it a quick check and adjusted the saddle before plonking it on the side and returning to our seats for a briefing. We got told the ins and outs, some basic ‘don’t do this, it won’t end well’ training before being let loose on the track. There were a few who had never used clippy shoes before, so they were given a crash course – they weren’t advised that everyone falls off at least once when they start to use them (surely it’d be the same today…).

Actually getting onto Derby Velodrome

We began by keeping to the flat dark blue area closest to the inner circle, this part had no banking to it and gave riders a chance to get used to the bikes. We were then encouraged to move onto the light blue ‘Côte d’Azur’ section, which had a slight bank to it. The boards underneath here gave off a slight creak whilst riding which didn’t inspire confidence. I got told off for catching up with a slower rider (to lap them) and passing them on the outside by using the actual track.

Gradually we were allowed higher and higher. The coach stood on the track and made us go around him to get used to it. He then put out some cones on one of the straights and made us climb the track, have a wiggle and then descend to get used to the increase in speed. Eventually, we stopped and had our next briefing. Two riders found themselves on the deck as they came to a stop. On reflection I remember we got told how to slow down beforehand, but not necessarily how to come to a complete stop. They picked themselves up, no harm done other than the odd bruise.

The group was then split in two, so one group had to watch as the others had their fun. I got moved to the front of the line (the coach clearly knew talent when he saw it), told to set off on the Côte d’Azur at jogging pace in an effort to keep the group together. As I finished my first two laps, I got told to go quicker (so I did), then the next lap again told to go quicker.

I’ve since been reliably informed that this broke the group and meant I had a massive gap behind me as the second in the line was more of a leisure cyclist. I quickly caught the tail of the group and was mad to move from the black line closest to the bottom, up to the red line. From here the perceived angle on the bends begins to defy what your eyes believe is possible.

As the rest of the group began to move up a line, I went higher (on instruction) so that I was the first one doing laps around the top. I gradually moved up and remembering we were told that the angle is the same at the top as it is at the bottom of the banking, I felt more confident. However the the eyes still trick you into believing it’s a long way down from the fall that is surely inevitable. The fact that no-one fell off in the hour long session on any of the banking, tells you just how ‘sticky’ the bikes are to the boards.

Derby Velodrome has a minimum speed of 15mph if you do want to make it round without falling, so I was making sure I was nowhere close this speed. I don’t have any data from it (almost weird riding without a Garmin), but it felt like 20mph+ comfortably. Eventually the others also got moved up to top and with some not willing to make the leap of faith, it began to feel broken up compared to when it was just me smashing round the track at that level. I found myself having to control my speed better in order to not have to perform any undertakes. No dramas though!

We had to stop again so others could have their turn, before having one last go with 5 minutes left avoiding cones again. This was now easy stuff! All too quickly the session was over and the next batch (who looked far more at home) were itching to get on.

The end of the taster session

I was glad I did not wuss out and made it all the way to the top (not everyone did) and enjoyed wizzing around and around. The whole experience left me wanting to have a go at the next step towards accreditation at Derby Velodrome, the second step of four towards being able to ride the track unsupervised.

Because I didn’t attach the Gopro to the track bike whilst I went round, I walked up to the highest point of the track to get some footage of the next group. They were busy smashing it round the track on their fancy track bikes. There was some mild drama as a child of someone from the session I was in managed to drop a hat onto the track, but the riders managed to avoid it and that was that.