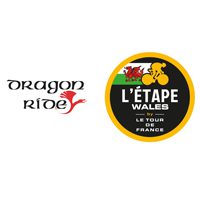 The Dragon Ride had been identified as a keystone of my cycling in 2017. Several club members had come up with the idea of doing it earlier in the year, it seemed like a good next goal after heading to Belgium in the Spring. The route would leave Port Talbot and take us up into the Brecon Beacons for some proper climbing before returning to the coast. 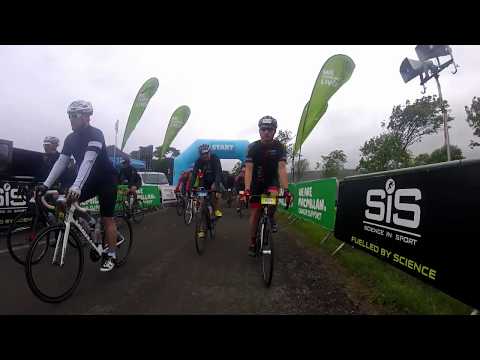 Forced awake at half 5 in the morning, Alex had already cooked up a big bowl of porridge for us. Bleary eyed, I got myself ready and in the car on time for the drive down to Magram Park for the start. Once we’d got there, Alex realised he’d left a bag full of gear at the house we’d stayed at (and wouldn’t be returning to) so he had to shoot off to make the round trip again – he probably didn’t expect to end up starting with us.

Whilst the rest of us were getting ready and packing ourselves full of food, Mike was busy trying to reconnect his electronic gear cable to the battery in his seatpost. Connection was made, but in trying to put the seatpost back in the bike, managed to get the cable caught between the outside of the post and the inside of the frame. It ended up sheering through the cable completely, meaning the bike was stuck in its biggest possible gear.

Whilst Jim, Billy and I got ourselves a coffee, some of the Trek mechanics took a look at Mike’s bike. They did that teeth sucking noise that is never the sign of an easy job. Essentially they’d have to take the bike apart to make the repair, something they didn’t really want to do. Mike’s ride was over before it began. A few minutes later Alex arrived and the best part of an hour and a half after arriving we were finally ready to leave.

Didi Senft ‘The Devil’ at the start

We started all together, sort of (my GoPro footage seems to suggest that only Dave was behind me) but were all together again once we were out of the park and onto the proper roads. We were treated to some lovely scenic steelworks from our vantage point on the dual carriageways around Port Talbot. I was mildly told off for putting the power down on a short rise, Jim reminding me that it was a long day ahead. Once off the dual carriageways, we were able to find some smaller roads through a village or two with the first sense of a climb beginning after passing through a viaduct.

Somehow by this point we’d already done 10 miles and things were feeling deceptively easy. Working our way deeper and deeper into a valley, it was obvious that we would shortly have to climb out of it. I took the lead initially, but riding with a bunch of lighter guys good at climbing meant I would spend my day playing catch-up. The Bwlch climb was a long one (4.2 miles at 5%, 2nd Category) that wound its way up one side of the valley before a sweeping left-hander took us onto the other side, round a hairpin before going up and over. The tailwind kicked in again here and I was overtaking riders whilst looking out for where the others had stopped. Group back together, I flipped the GoPro from facing backwards under my saddle to sitting under my Garmin.

Wouldn’t be Wales without some sheep

The descent was windy, never good with crosswinds I held back a bit but caught up as everyone got held up by some temporary traffic lights. With the wind now a bit more friendly the descent got more fun, the odd sweeping long turn testing those technical skills. Unfriendly lights meant we got split up in Treorchy but we were all together again by the bottom of Rhigos mountain (5.6 miles at 4%, 2nd Category). Once again as the gradient shot up, I started going backwards (6% is the magic number for this process to begin). Again a steady gradient meant you could stick to one gear and just get a rhythm going. Once it flattened out near the top, I found myself next to Joe and wasn’t the last one up this climb!

The descent was amazing, clear lines of sight, long straights and one long long bend. It was down this descent that I hit my top speed for the day 77.3kph (kph used because it’s a larger number and obviously more impressive, 48.3mph in old money). Jim and Alex went flying past so probably topped my speed, but not knowing the descent I like a bit of caution. At the bottom we found ourselves at the first feed station of the day. We stopped with the exception of Dave who decided to press on (his ride finished interestingly…) and helped ourselves to the usual gels and jelly babies but the highlight were the boiled potatoes with rosemary and garlic that were a welcome change from the processed food.

The guys and I waiting at the first feed station

The middle of the Dragon Ride

We were now about 2 hours and 34 miles into the ride. Post food-stop we found ourselves overtaking gaggles of riders as we all worked together, taking turns at the front and tapping out the miles. We were cycling through something similar to moors, with no villages and no houses either side, just the views of hills. It didn’t feel it at the time, but we were very gently climbing for ten miles and our group swelled as others caught us and decided the pace was good enough. A left turn at a lake led us onto a busier road, suddenly full of walkers apparently heading to climb up the highest peak of the Brecon Beacons nearby.

Rounding a corner, we were treated to 4 miles of descending. I spent the first while on the front until Jim and a stranger in a Quickstep jersey started rolling through. As soon as you caught the draft of the person in front, you found yourself having to come round to keep going (using brakes wasn’t an option of course) and whilst this was happening we had the nearest of close passes I think I’ve ever witnessed. It made it into the video below, but we were overtaken by a car that then had to dive back in front of us because a car was coming the other way. How it managed to miss everything I’m not sure, but it was an unnecessary moment with us going at 40mph.

Some excellent leaning on the corner

I stayed on the front (although would wish I hadn’t) for the next section, forging a path through small lanes with high hedges and negotiating a way past slower riders. By now it had started raining and we stopped so the other guys could put on rain jackets (I hadn’t brought mine) and we made our way to the bottom of the Devil’s Elbow. This was the hardest climb on the whole Dragon Ride (1.1 miles at 10%, 3rd Category) and it was done in a large downpour (that’ll explain the rain drops in the video). I ran out of gears far too early so spent most of it grinding away. The climb was busy so there was also other people to negotiate but I only saw one person get chopped in front of and have to stop.

The first hairpin was brutal, especially as I’d gone up the steepest inside part for a bit of space. On the way up to the second hairpin we had a sheep on a ridge just above head height doing a particularly laugh sounding ‘baa’ at us as we went past, it got told to shut up. With the second hard hairpin done, it flattened out and I found the guys (last again). Descending slightly, we found ourselves at the second feed station, I had a sausage roll in the rain, lovely. It turned out that Dave also didn’t stop here (can possibly start to guess what happened to him…).

The steepest part of the Devil’s Elbow…in the rain

Things start to get tough…

Finishing off the descent, we found ourselves back in the sun and able to dry out again, but it didn’t take long to find the rain once again. Going up The Glynneath climb (1.8 miles at 6%, 3rd Category) I felt like I was struggling. The legs weren’t feeling as fresh anymore and being wet is never morale inspiring. Once again I found myself dropping back and was having my hitting the wall moment.

Once the climb flattened out, there was a short descent and the guys were waiting. It was raining hard and wanting to push on whilst having my moment I carried on knowing they’d catch up. I was soaked as we came into the village of Seven Sisters and once the guys came past, a short rise meant I dropped off slightly. Alex came back and gave me a wheel to follow and the descent into Neath gave me a chance to recover and push through.

With the sun back out and spirits restored, we rounded the outskirts of Neath, had a brief food stop of our own on someone’s driveway before tackling the last notable hill of the Dragon Ride. Again the guys were gone up ahead but I pushed through like I had all day. I even managed to give a guy a push on one of the steeper parts as he was starting to do the ‘no gears left’ weave. Following the trend of most of the day, not many people were coming round me and I was overtaking lots so seemingly I wasn’t awful going uphill, it’s just the 5 guys I was with were better.

Pushing on at the top of the climb, I saw 3 of the guys but they were hiding amongst the throng that had gathered. Not wanting to slam on the brakes I rode on, thinking they’d catch up on the descent (Jim and Alex in particular had been blasting past on them all day). I caught up with a Stratford CC jersey that wasn’t part of our group and had a chat with him. I saw Joe waiting at a junction, it turned out he’d broken a spoke but nothing was said as I came past and I only found out at the finish, otherwise I’d have stopped! The other guys did stop, but not much was to be done so Joe rode the last stretch of the Dragon Ride with a bit of a wobbly wheel.

A bit shellshocked at the finish, collectively picking up our pot of pasta

I’d been expecting the guys to catch me up, particularly into the wind along the dual carriageways that we’d started the ride on. I didn’t get overtaken by anyone, but found myself overtaking lots of others. The Dragon Ride finish-line was further away than it felt at the beginning, particularly as it was uphill for the final stretch. Making the final left into the park, I had some fun leaning into the corners but couldn’t get overtake two guys finishing in front of me. A medal was put round my neck and a free pint of alcohol-free wheat beer was on offer and gratefully received. The guys came home a minute or so later. We wolfed down some pasta available, saw the end of the Dauphine and then headed home.

As for Dave – well he ended up in the broomwagon after a dizzy spell on Black Mountain. Always always remember to eat whilst riding!