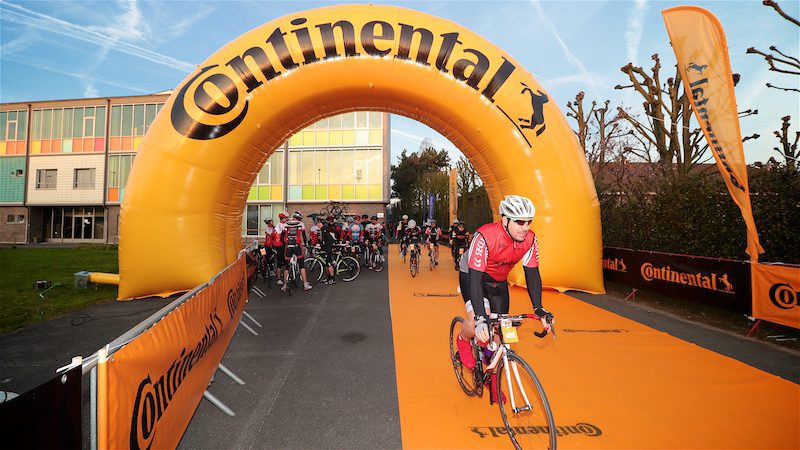 As part of my trip to Belgium this year, before signing up to the Gent – Wevelgem sportive, this was the main event for me. A chance to ride up some of the same cobbled climbs that I’d seen the pros ride a couple of days before (and a bit of preparation for whenever it is I’ll get round to riding the Tour of Flanders). The Fabian Cancellara Classic is a sportive that more or less follows the route of the E3 Harelbeke race and included a visit from Spartacus himself – although I didn’t see him.

The event’s HQ was right next to the finishing straight of the main race, where I’d hung out a couple of days before with my camera taking shots of the riders signing in. I signed in, had no issue with the scanning of my ticket (unlike at the Gent – Wevelgem sportive), picked up my energy kit (which I had forgotten I’d ordered until an email the day before) using my best Dutch (Ik heb een Pack gekocht…it worked), attached my rider number and away I went, under the Fabian Cancellara Classic start banner.

Like all these events, they’re a lot easier if you can get yourself into a group and just sit in the wheels being given a free air tow. I managed to latch onto a group doing a decent speed and we stuck together coming out of Harelbeke and throughout the farm lanes (some of which I’d already done on my to the Oude Kwaremont two days before) and back onto the main road to Oudenaarde. It was amazing how little traffic there was, particularly on the well paved single-lane countryside lanes, where the appearance of a car would cause havoc on a UK sportive. The signals from other riders were a touch different from the UK, you either get no information at all or a deft waft in the direction of danger, blink and you’ll miss it.

We’d been overtaken by a long line of riders in black and shortly afterwards the group I was with all decided to pull over and stop leaving me the option of coasting or trying to put in a dig to catch the riders in black who weren’t too far away. It wasn’t the easiest catch, but I did manage it only for the first food stop to come along 10km later. I stopped, refilled the bottle and packed up on the usual waffles which make excellent cycling food, much nicer than a gel.The flat part of the day was now over and it was not long before we were heading up the Edelareberg.

The legs still hadn’t woken up fully from the previous day’s efforts doing Gent – Wevelgem and felt heavy, naturally a gap opened up but it turned out the split for my distance was just ahead and only 5 of us made the turn. We stuck together for awhile following a similar pattern to the recent CFC Sportive where the lighter guys went up the Bogineberg, another short steep climb, much quicker than I did but once over the top I was able to close the gap on the easier 1-2% gradients. I then un-did the good work by making a mess of the descent of Kapellenberg, lots of sweeping bends were navigated fine but thinking the road went straight on I saw very late that actually the road went round to the right. I hit the brakes but the understeer kicked in and I was forced to go miss the turn by 10 metres. A quick turnaround and scoot back up to the junction and I was able to finish the descent, but with another gap opened up to the others.

Closing the gap (again) we then hit the first cobbled climb of the Eikenberg, which helpfully has a nice freshly tarmac-ed part to the side. The climb is short but steep with lots of double digit gradients. Eventually the tarmac ran out and I was forced onto the actual cobbles, again the legs weren’t happy and a gap opened up but the fresh tarmac after the cobbles were a huge relief. I did much better on the next descent, managing to stay on the correct road. The next climb was the Stationberg, which unsurprisingly goes past a train station. Again cobbled and no respite at the sides this time, I started it quickly only to have one rider come past on the steeper part. Once the gradient lessened to 3-5% I had a second wind and flew past again – think this was the moment that my legs finally woke up on the ride, a mere 38 miles in.

Tackling the Paterberg and Oude Kwaremont

The downside to flying past was that I dropped the 4 guys that I’d been riding with but soon tagged onto the back of another group that overtook me on the grinding climb of the Kapelberg, a fun mainly straight descent led us to the iconic Paterberg. The Paterberg comes late into the race of E3 Harelbeke but is most famous in the Tour of Flanders where it’s the last cobbled climb and has often decided the outcome of races. Topping out at 22% from the bottom it was already possible to see people that had had to get off the bike and were walking up it. I unashamedly took to the smooth concrete gutter and rode up with real issue. Unlike the Kemmelberg the previous day, I didn’t fancy the struggle on the cobbles this early on with plenty of the Fabian Cancellara Classic still to go!

This made extra sense as the next section was the equally iconic Oude Kwaremont where I watched the E3 Harelbeke pro race two days before. The full length of the Oude Kwaremont lasts for a mile and has a climb part and a flat part (where Peter Sagan hit a coat in the Tour of Flanders this year and crashed). The first steep part was hard, but I found myself overtaking people, past the spot where I’d sat taking photos and up into the village. From here the flat part started and using a dusty part to accelerate kept up a good speed until the junction at the end. I ended up close to a minute quicker along there than club mates who tackled the same road a week later, but showing the gulf in class, the Pros are not far off doing it in half the time I did.

The final stretch of the Fabian Cancellara Classic

I struggled up Karnemelkbeekstraat, a real grind that was a touch too steep for me but thankfully there was a feed station at the top of it. I’d been riding with one guy since the Paterberg and he also stopped here, I had a quick toilet stop, ate a waffle or two, returned to my bike and found the guy waiting for me suggesting we moved on. We went down the long fun descent into Berchem which I’d done racing to a new point to watch the pro race from before attacking the flat cobbled section of Varent. It was here that I took a few photos, but I didn’t stop, following a rider before having to wait ages at the junction at the end as a traffic cop stopped us from crossing before eventually relenting. As a result a large group formed ready to go up the Tiegemberg, I managed to drop my chain switching to the inner ring which meant a quick hop-off, bike flip, put the chain back on, bike re-flip and hurredly jumping back on to finish the climb. The last proper climb dispensed with, the rest of the Fabian Cancellara Classic was flat.

A large club came past and I made sure to hop onto the back of them, getting a free air tow back into Harelbeke, the speed was high on these flat sections, rarely going below 20mph as the large group powered through. The last 2 miles were done at just over 24mph – my inner child kicked in and shot off the front with just under half a mile left to go, the chance to accelerate to the finish line and hopefully out-sprint someone. Somewhat disappointingly, no-one came with me (Strava says I was doing 27.6mph, so probably understandable) so I just had the satisfaction of knowing that I held off a chasing group ensuring I got to the bike parking and the beer before they did and celebrate finishing the Fabian Cancellara Classic in style.