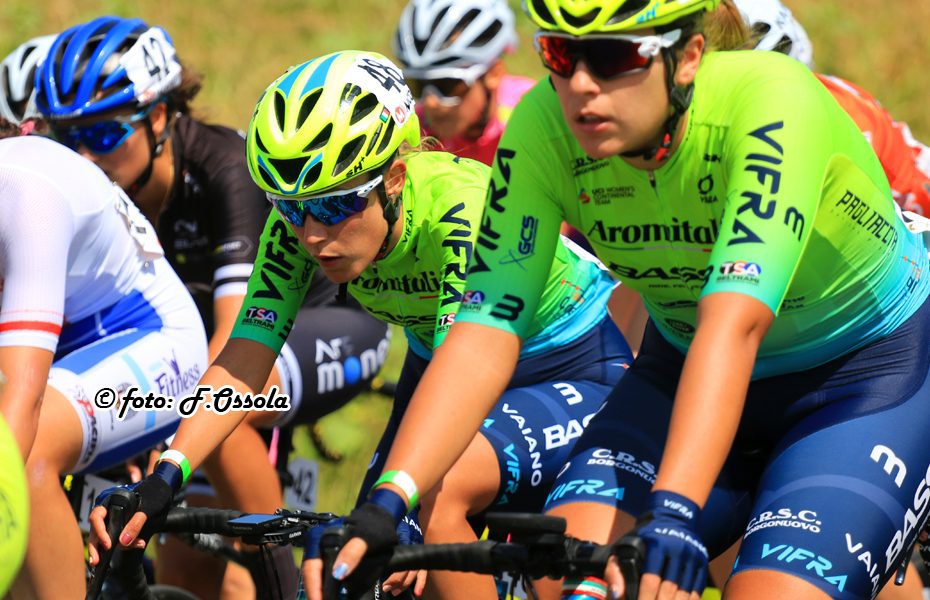 Eve of the first official meeting for the athletes of the Aromitalia – Basso Bikes – Vaiano team, who will meet at the Palladio Hotel in Montecatini Terme (PT) tomorrow, Tuesday 4 January. The girls of patron Stefano Giugni will receive the new technical materials, will carry out the first athletic tests at the “Light Clinic by Sixtus” in Gragnano (LU) and the usual medical examinations by the team headed by Dr. Roberto Rempi. Five new faces of the team directed in flagship by the multi-titled blue technicians Paolo Baldi and Matteo Ferrari: Francesca Balducci, Francesca Baroni, Milena Del Sarto, Carlotta Fondriest and Lara Scarselli.

– Francesca Balducci, born in Pontedera (PI) on 1 May 1996, is ready to experience the eighth season in the elite category, after wearing the S.C. Michela Fanini – Record – Rox, of Team Servetto – Piumate – Beltrami TSA, of Conceria Zabri – Fanini and of Team Born to Win G20 Boiler Parts – Ambedo. During her competitive career, Balducci, the younger sister of the former professional Michela, has accumulated an extraordinary wealth of experience by taking part in some of the most prestigious competitions on the international cycling scene, including four editions of the “Giro d’Italia U.C.I. WWT “, the” Liège-Bastogne-Liège U.C.I. WWT “(2017), the” Ronde Van Vlaanderen U.C.I. WWT “(2017 and 2019), the” Alfredo Binda Trophy – Municipality of Cittiglio – G.P. Almar U.C.I. WWT “(2017, 2018 and 2021), the” Strade Bianche U.C.I. WWT “(2017, 2018 and 2021), the” Freccia Vallone U.C.I. WWT “(2017), the” Tour of Chongming Island U.C.I. WWT “(2019), the” Vuelta a Burgos U.C.I. 2.1 “, three editions of the” Gracia-Orlova U.C.I. 2.2 “and the same number of the” Giro della Toscana – Memorial Michela Fanini Premier U.C.I. 2.2 “, the” Trophée d’Or Féminin U.C.I. 2.2 “and the” Setmana Ciclista Valenciana U.C.I. 2.2 “. Multi-titled and several times victorious in the youth categories and among the juniors, Balducci is a complete athlete: strong on her pace, in short climbs and on routes particularly rich in ups and downs.

– Francesca Baroni was born in Pietrasanta (LU) on November 4th 1999 and lives in Massarosa, in the province of Lucca. In the last competitive seasons, you have achieved exciting results, especially on cyclocross dirt roads. In addition to the numerous laurels won in the youth categories, in fact, the strong Tuscan athlete won the titles of Italian national champion under 23 in 2020 and 2021, a sixth place in the “U23 CX European Championship” in Silvelle in 2019, a seventh place at the “U23 CX European Championship” in ‘s-Hertogenbosch (Netherlands) in 2020, a seventh position at the “U23 CX World Championship” in Dubendorf (Switzerland) in 2020 and a fantastic’ top five ‘in the last edition of the ” U23 CX World Championship ”in Oostende (Belgium), held last January. In the last two years on the road, Baroni, a strong athlete on the pace, against the time trial and on particularly demanding routes from the altitude point of view, has played in as many U.C.I. Continental, participating in some of the most prestigious competitions on the international cycling scene, including two editions of the “Giro d’Italia Women U.C.I. Women’s World Tour “, the” Strade Bianche U.C.I. Women’s World Tour “the” Alfredo Binda Trophy – Municipality of Cittiglio – G.P. Almar U.C.I. Women’s World Tour “and the” Giro della Toscana – Memorial Michela Fanini – U.C.I. 2.2 “. In the last competitive season, the new signing of the Prato team took an excellent seventh place at the “Grand Prix Féminin de Chambéry”, an international U.C.I. competition. 1.2 disputed on the transalpine roads, a ninth place at the “Gran Premio Città di Corridonia – National Pink Day” and touched the ‘top ten’ at the “Italian Championship” in Castellana Grotte (BA) and at the “Italian Time Trial Championship” in Faenza ( RA).

– Milena Del Sarto, born in Lucca on December 3, 2002, began competing in the 2014 racing season, later wearing the San Miniato – Santa Croce sull’Arno A.S.D. (as a first-year rookie), Inpa – San Vincenzo Cycling Team (as a second-year rookie and as a first-year student), Team Zhiraf (as a second-year student) and Team Gauss (in the two years as a junior and in the first year between the under). In the 2017 season, the talented athlete from Lucca won the tricolor title at the “Cronosquadre Italian Championship” in Treviglio (BG), while in the following year she took some successes between road and track, including some regional Tuscan titles, then touching the podium in several specialities of the “Italian Track Championships”. In this last competitive season, Del Sarto, an athlete with an excellent fast start, but also strong on undulating and not too demanding routes from the altitude point of view, collected several placings in the open races, also taking part in the “Giro della Toscana – Memorial Michela Fanini UCI World Championship 2.2 ”and other international track competitions.

– Carlotta Fondriest is the daughter of the former champion of blue cycling Maurizio, able to win the “World Championship” in Renaix (Belgium) in 1988, the “Milan-Sanremo” in 1993 and two editions of the “World Cup” over the years. 1991 and 1993. Carlotta was born in Cles, in the province of Trento, on January 2 1997, and has been cycling for a couple of seasons. In the last competitive year, the athlete from Trentino was the protagonist in the “Italian Elite Championship”, raced on the roads of Puglia, and in the two fractions of the “Giro della Campania in Rosa”.

– Lara Scarselli, born in San Miniato on 10 December 2002, has collected numerous successes on the road and track in the beginner’s category and many podiums among the students, wearing the glorious uniform of the San Miniato – Santa Croce sull’Arno A.S.D. In the two years among the juniors she defended the colors of Team Ciclismo Insieme and Team Zhiraf – Guerciotti, touching the successes at the “Giro dei Due Comuni – Chiara Pierobon Memorial” in Noventa di Piave (VE), at the “Gran Premio Città di Monselice ”And the“ Bussolati Asfalti Trophy ”in Bianconese di Fontevivo (PR). In the last competitive year the young Tuscan athlete, very strong in the sprint and in particularly fast competitions, joined the GB Women Team of the former professional Gianluca Bortolami, also taking part in the “Giro della Toscana – Memorial Michela Fanini U.C.I. 2.2 “.

You are the athletes reconfirmed in the team more than ever: the Lithuanian champion Rasa Leleivyte, bronze medalist at the “European Championship” in Trento and protagonist at the “World Championship” in Leuven (Belgium) and in the Olympic test in Tokyo, the daughter of art Sofia Collinelli, looking for redemption after a season conditioned by the after-effects of some physical troubles, Inga Cilvinaite-Cesuliene, Lithuanian national champion in charge on the road and against time, the thirty-one-year-old from Tregnago Valentina Scandolara and the ever precious Tuscan Giulia Marchesini and Gemma Sernissi. (Photo by Flaviano Ossola)