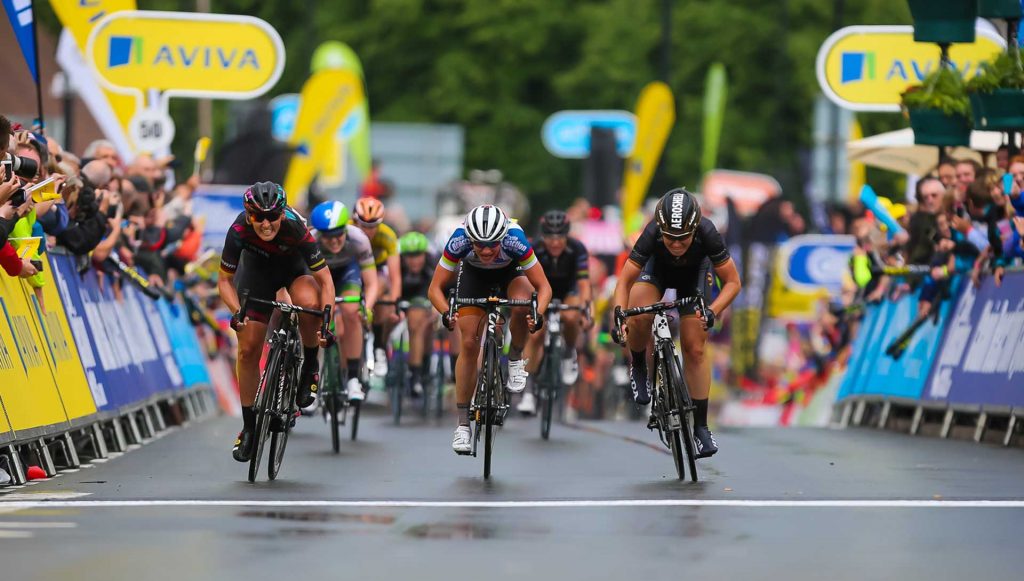 Stage 2 of the 2016 Women’s Tour took place across Warwickshire and therefore on my local home roads. The stage started in Atherstone in the north of the county before winding its way southwards. The route clipped the Oxfordshire hills before heading across to Stratford upon Avon for a slightly uphill sprint finish. The lumpy parcours offered up the potential for a rider to escape the peloton, then stay ahead of the chasing pack on the easy run to the finish.

The previous day’s Stage 1 was a pretty much flat day, which saw the riders over in Norfolk. Christine Majerus took the sprint ahead of Marianne Vos and Giorgia Bronzini.

The first batch of rain started early on in the stage, giving the riders a light soaking in the first 25km. The first intermediate sprint in Kenilworth saw Lotta Lepisto take the honours ahead of race leader Christine Majerus and Marianne Vos. This increased Majerus’ race lead from 1 second to 2 seconds over Vos.

Esra Tromp and Emilia Fahlin attacked the peloton before the first major climb of the day to no avail. On the climb at Burton Dassett the peloton split. Roughly a third of the riders found themselves needing to chase back on. UHC’s Katie Hall took the points at the summit, finishing ahead of Alena Amialiusik and Lizzie Armitstead. At the second sprint in Tysoe, despite the lead-out by Lizzie Armistead for her teammate Majerus, Marianne Vos took the sprint. This negated the 1 second earned by Majerus before and kept the race lead gap at just 1 second. Leah Kirchmann took the final place.

The race had been dry at Tysoe but by the time the race reached Ilmington, a massive rain shower kicked in. Amalie Dideriksen and Malgorzata Jasinska had a gap to the peloton going into the final categorised climb. A deep flash flood at the bottom created some nervy moments for the peloton but they successfully negotiated the hazard. Jasinska took the points at the top, ahead of Dideriksen and Katie Hall was first over from the chasing bunch. That gave Hall enough points to take over the QoM jersey from Stage 1 leader Ilona Hoeksma. Anna van der Breggen’s strong work up the climb for Rabobank thinned the peloton out a lot further too.

The peloton further thinned by the final uncategorised climb up Baker’s Hill in Mickleton. Just 27 riders would contest the sprint in Stratford upon Avon. Small gaps appeared as the peloton went over the Grade 1 listed Clopton Bridge approaching the town centre. The small gradient change made riders struggle at their maximum efforts. Lisa Brennauer led the peloton over the bridge and into the base of the finishing bump. Brennauer came super close to holding on for the sprint victory but the Dutch pair of Amy Pieters and Marianne Vos was ready to pounce. Pieters just pipped Brennauer for the victory, with Vos finishing third in the end.

Vos’ third place gave her enough bonus seconds to become race leader with a gap of 3 seconds ahead of Christine Majerus and 7 seconds over stage winner Amy Pieters.

Amanda Spratt’s Strava from the day

I didn’t expect that much from the race [yesterday], we have a super strong team. Georgia [Bronzini] was there too, and she felt good, so we had two chances in the sprint. I started sprinting quite early, and I knew she was behind me, so I knew we had a second chance if it wasn’t working. But in the end I got it and we had a team win.

At first everyone was new – you’re used to riding against each other and suddenly we have to ride with each other – but we’re getting so close with each other now. We’re all in such good shape and I think it helps a lot that we’re feeling good, we all believe in each other, we have a lot of fun off the bike, and I think that’s really important.

To have the stage win now takes a lot of pressure off. Now we can concentrate on the GC. That’s probably a harder target for us – we have a team of winners and fast finishers. To win the GC would be a dream come true for a British team at The Women’s Tour. Normally, the home team doesn’t win because everyone else knows that they want it so much, that they have to take on the majority of the work. It means so much more to us than everyone else, that we are expected to do more work. It will be hard to win GC for those reasons.