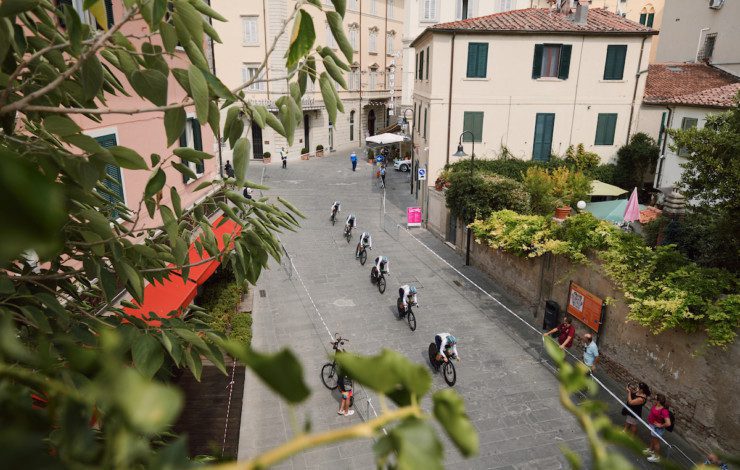 The opening stage started with a 16km long pancake-flat team time trial around the town of Grosseto. Fast racing on this terrain could be expected, with the course not featuring a significant number of curves. This meant that the time gaps between each team were close and it became important to make every second count. Équipe Paule Ka was the 12th team to leave the start ramp, and put in a strong performance. stopping the clock with a time of 20:15:08. In the end, Trek Segafredo took the win, while Équipe Paule Ka took fourth place.

Team Owner Thomas Campana remarked after the opening stage: “It was a very unlucky start for the team at the Giro Rosa. Clara suffered a bad foot infection two days before the start of the race and so we had to replace her last minute with Niamh, who missed a day of team time trial training, which wasn’t ideal for us. Leah was also not in her best form, and so the preparation for this opening stage was not what we had hoped for. We therefore had very conservative expectations, as we also experienced some adaptation problems in the training days. But in the end, we could see the riders were ready to perform and we witnessed a solid ride. On race day, the team performed well, and finished only 10 seconds off the best teams in the world. We were the top non-WorldTour team, and from this perspective it was a good performance. Our hard work over the last three days has appeared to pay off. Everyone showed very impressive skills in the team race against the clock, especially as this was the first team time trial for five of the six riders. Thank you must go to the riders and staff for their hard work. We have the white jersey with Emma, and we will try to defend this, and take control of the coming stages, and see what we can achieve here at the Giro Rosa.”