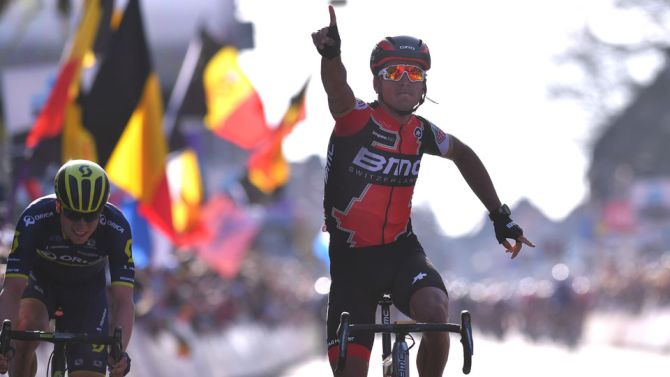 Gent – Wevelgem is a race where the puncheurs do battle with the sprinters to make it a tough enough race to not be a bunch sprint at the end. Traditionally, winners here are the punchy sprinters, every now and again the out and out puncheur gets themself a win (e.g. Paolini in 2015 and Eisel in 2010). It depends if any sprinters can keep together with the lead over the Kemmelberg with the lead group or not – last year the leaders rode off from here before splitting up on the final run to the line.

The race takes place in the areas of the fiercest fighting during World War I and has recently embraced this history by adding ‘in Flanders Fields’ to its title and the introduction of the gravel Ploegsteert sections through some historical areas. The sheer number of military cemeteries all around the race route makes the link unavoidable.

Greg Van Avermaet is last year’s winner and finally arrived in 2018 with 3rd place in E3 Harelbeke this week. As usual, he’s always in with a shout. Peter Sagan however, finished a lowly 26th on Friday. An unwillingness by other people to work when in the same group completely shut him down as a contender. He’s won Gent – Wevelgem twice, but found himself dropping out of the lead group last year when others again didn’t want to work with him. Sep Vanmarcke is the other perennial favourite, he’s finished 2nd twice and grabbed 7th in E3 Harelbeke. Expect another solid shot at a top 10.

If any of these riders find themselves in the lead group after the Kemmelberg, they’ll become strong favourites for the sprint to the line. John Degenkolb is a former winner of Gent – Wevelgem, he finished in the 3rd group on the road in E3 so the flatter parcours of this race should help him more. Arnaud Demare has the strength to get over the Kemmelberg and finish off the race with a strong sprint. He’s been 2nd before and is a relatively well rested after not being in the final mix on Friday. Michael Matthews won the sprint in the second group on the on Friday, although ultimately it was for 12th place. If he’s there approaching the line again, he can beat anyone.

Sonny Colbrelli finds himself in a similar boat as Demare, he finished well down in E3 Harelbeke but is capable of a much better result here. I bigged up Jasper Stuyven ahead of E3 Harelbeke and he came 6th, he can certainly make the top 10 again here and he’s due a big win too.  Finally, if the race is kind, Dylan Groenewegen and Elia Viviani could be in the mix at the end. They’ve both been arguably the best out and out sprinters so far in 2018, winning plenty between them. Whether or not they’ll be in the mix depends on how the race goes over the climbs and if a move sticks.

The more out and out puncheurs get a mention. The winner of E3 Harelbeke Niki Terpstra definitely needs a mention. He was also in the mix in Gent – Wevelgem last year. Terpstra had a falling out with Peter Sagan over who was going to do the work chasing – so they both didn’t win. He may not have the legs after his 70km breakaway win on Friday. Strade Bianche hero Wout van Aert is back. That race showed that he can get over the climbs. We’re still not sure how he fares in a sprint finish after his attack of cramp on the finishing climb. We may find out. Edvald Boasson Hagen deserves a mention. He was in the mix for large parts of E3 Harelbeke but ultimately finished in the third group with Degenkolb and Sagan. That’s not bad company to find yourself in at this time of year.

Jurgen Roelandts is the backup BMC option if anything happens to Van Avermaet. He ended up 12th on Friday, but has 4 top-10 finishes in Gent Wevelgem. In the absence of Andre Greipel, Lotto have both Moreno Hofland and Jens Debusschere to play with. Debusschere is probably the lead option. He has a best finish of 5th place here but if it all comes together for a sprint then Hofland will play his part.

Speaking of sprinters, Alexander Kristoff should be in the mix. He had a quiet E3 Harelbeke but can never be ruled out. GP Denain winner Kenny Dehaes has a best finish of 5th and in his current form could repeat that. Astana rider Magnus Cort Nielsen came 8th in Milan – San Remo. He could very well get a similar result here if the race goes his way. Daniele Bennati gets a mention as a past multiple podium finisher, but is a longshot.

Gent – Wevelgem doesn’t obviously suit Oliver Naesen‘s strong points. If he finds himself in the right group coming over the Kemmelberg he could stay away for a good top 10 result. His weakness in sprinting will probably prevent him from getting a big result. Sky’s young gun Kristoffer Halvorsen will also be hoping to be in the mix for a sprint finish. Failing that Gianni Moscon will lead the Sky charge over the Kemmelberg. Finally, Cofidis’ Christophe Laporte will be racing for the first time since his good result at Milan – Sanremo. He’s another one who will be hoping it all stays together.