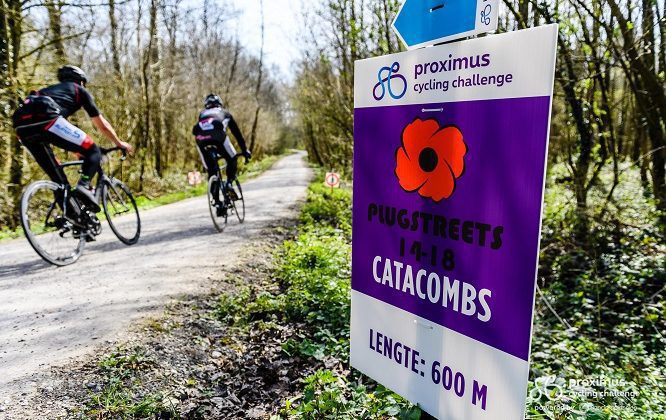 This was a late addition to the plan for my trip to Flanders. Having worked out the dates all fitted nicely and that the actual Gent – Wevelgem race clashed with the Fabian Cancellara Classic anyway, I may as well do one of the shorter versions (90km) of this sportive.

Traditionally known as a bit of a ‘sprinters classic’ because it often finishes in a bunch sprint. The parcours for the Gent – Wevelgem Sportive was predictably quite flat, with the exception of the notorious Kemmelberg. The Kemmelberg is a cobbled climb that has a max gradient of 22%, set amongst a wood.

The start was nonplussing. A bit of an issue scanning my ticket was overcome. The grabbing of a free bottle (never say no to one of these) and then just start. I fell in with members of the Mouscron Cycling Club. Learning that Mouscron is on the Walloon side of Belgium and that the signals and shouts abroad are slightly different to our ones.

The cry of ‘clear’ for a clear road at a junction gives a touch of finesse with ‘beau’ used instead. The idea of not having to use the brakes because the road is clear, beautiful (beau) sums it up nicely. You learn of potholes by a whaft of the hand, panic sets in when you hear ‘voiture!’ or ‘auto!’ and the helpfully easily understood to English ears of ‘attention’ or ‘danger’.

Being sensible, knowing I had another event the following day, the Mouscron guys were going at a perfect pace for around 10km. This before they all sat up and pulled over for some reason. I then had to boost across a gap to a quick group that had passed us a short while before. Hanging onto the back of this group, we were hammering along with the exception of the bottlenecks. This was because our peloton trying to overtake another slower one on a single track lane.

Good group skills help persuade others not to jump in front of you and to also get through. This repeated itself quite a few times. I talked with one of the guys surprised that I was there for E3/Gent – Wevelgem and not the Tour of Flanders next weekend…maybe next year.

We came into Ypres and had the opportunity to ride through the Menen Gate. A memorial to the British soldiers that fought here in the First World War. Gent – Wevelgem has for the last couple of years, decided to embrace this history more and more. Introducing the ‘Poppy Streets’ and the addition of ‘In Flanders Fields’ to the official race name. Here half a dozen Hitchin Cycling Club members stopped to look at the memorial.

Immediately through the gate the road turned into cobbles. Which I took it upon myself to fly overusing the Paris – Roubaix knowledge I’d gained a few years ago. If you ride across the cobbles as hard as you can, you sort of bounce across the top of them. This instead of falling into the gaps between them quite as much. As we left Ypres, my distance split from the pack as we had a feed stop. All of a sudden there was no-one around anymore.

Riding on my own now there was a point, not signposted from my direction where the longer distances linked back up. I know had some more people to follow and begin the bottleneck process again. One of the groups that we overtook was the Hitchin guys who’d obviously made up time whilst I ate waffles at the food stop.

Eventually, the 90km route turned off as those doing the extra distance went off on their loop. At this point, a couple of riders rode here and there, but no groups and the people I caught took it very easily. The next point of interest was the Kemmelberg.

The Kemmelberg is ultimately where the pro race exploded into action a few days later. With Greg van Avermaet shooting over the top, closely followed by Peter Sagan and John Degenkolb. When I did it, I was turning the pedals at walking speed. Having to pull out the zig-zag move to get up the gradient. I still did better than the two people I caught who had had to walk up it. The climb starts off on the tarmac and slowly turns up the difficulty. Creeping up to 8% before you get to the cobbles.

Once on the cobbles, it really goes up a few notches with the gradient creeping up. Now also combined with the added challenge of being bounced around. There’s no cheat routes, no friendly concrete guttering on the side, you’re forced to ride the cobbles or not at all. Eventually finishing on a 22% ramp and a short bit of flat cobbles. You can then thankfully turn off and make the descent.

Once off the Kemmelberg, the brutal headwind was now fully in play. Ruining all other downhill parts and making any cycling on the flat equally hard work. There was a brief incident where a woman left her front door with her dogs, right onto the cycle lane I was on. A quick moment of fright thinking I was about to run over a dog or two!

Still on my own, I had to tackle the Ploegstreete (poppy streets) alone. These are recently added sections of gravel road, seemingly trying to ape the qualities of Strade Bianche. No issues and no punctures, but the idea of taking the right-angled corners at full speeds didn’t seem a sensible one.

The final part of the Gent – Wevelgem Sportive

A quick stop at the next food stop. Where it seems the language had changed to French (I mean Walloon) without any clear demarcation. Some more waffles, a drink refill and I was on my way again…still on my own. After the final Puigstraat, finally, I managed to get some company. 4 guys overtook me so I tagged onto the back. For the first time ever in a sportive, a group of strangers got a reasonably decent chain-gang going. A chain-gang is sort of like how a team time-trial works, everyone is in a line and takes their turn at the front into the wind.

As the person at the front begins to tire and slow slightly, the person behind them cycles past to give the line a renewed impetus. Allowing the person from the front to go to the back and get a rest. Normally a chaingang starts and quickly becomes a case of ‘follow the strongest’ in most of my events. We kept it up the remainder of the way into Wevelgem…well until the last 2-3km.

We kept up our chain-gang as we moved onto the flat path beside the river. Even gaining an extra person with an orange bike who’d overtaken me beforehand earlier. The last 10km went by quickly as the focus was on maintaining the routine. The headwind prevented us from really speeding along but this was certainly a quicker option than going it alone.

We made the turn up away from the river and back to the main road for the last few km to Wevelgem. There was a relatively easy gradient of about 3-4%. It seemed to finish off a couple of people as a little bit of extra pace became injected into proceedings. Once we reached the junction at the top there were only 3 of us left.

Racing, but not racing…standard Sportive behaviour

I let the strongest guy go on the front (how generous am I) as I took the second wheel and he tanked us along for the next 2km. With 1km to go and the actual finish line just about within sight, I took over at the front and pushed the pace up. Orange bike guy had followed. With around 200 metres from the end came he past me.. Clearly looking for the moment of glory sprinting for the Gent – Wevelgem Sportive finish line.

Naturally, I couldn’t allow this so started up my own sprint. I pipped him on the line Greg van Avermaet style. His groan of disappointment followed by a smile showed that even without a word being said, we’d both been having our own little race.

I finished up with my Belgian riding post-ride ritual, a sit-down with a beer in the sun.