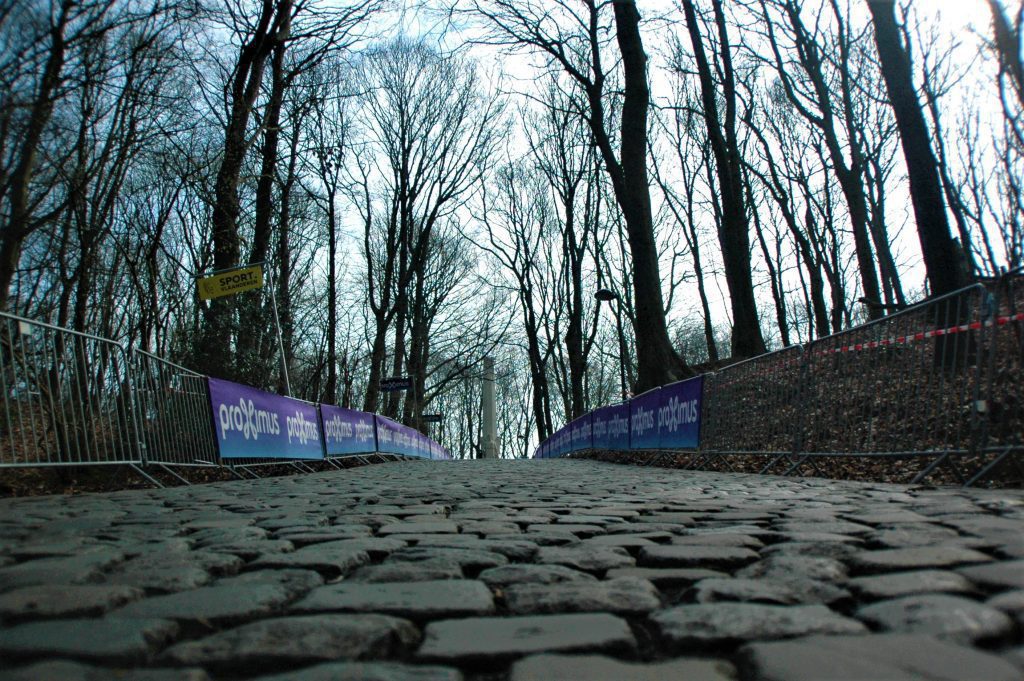 Gent Wevelgem is becoming a bit of a favourite sportive of mine having done it before in 2017 and 2018. 2017 I ended up doing two sportives in two days, so only did the 90km route as I didn’t want to be too tired for the longer E3 Harelbeke sportive I was doing the next day. In 2018 I rode the 140km route with Hannah, the same route I was doing in 2019.

This year I was riding with a group of guys (James, Stu, Blake, Luke, Andrew & Graeme) I ride with regularly at the Gorilla Coffee Cafe in Birmingham. We’d made the trip over on Friday, leaving early enough so that we’d reach Belgium in time to watch some of the E3 Harelbeke race. Ride the Gent Wevelgem Sportive on Saturday and then on Sunday watch the pros tackle some of the same route we’d done.

We stayed in Kortrijk so it was a 4 mile or so ride to the start line where we were able to quickly scan our tickets saved on our phones, get our numbers and the obligatory top tube sticker showing the distance to certain climbs and landmarks along the route. We started off quite nicely, actually sticking together as we navigated large groups of slower groups. James was put on the front as punishment detail for his drunken bender the day before.

The first section of the Gent Wevelgem sportive is pretty much flat, gently rolling terrain heading towards Ypres. A couple of times on the ‘hills’ we managed to get split up as Luke and I found ourselves going too fast for the group. After a scare when a random in front of me nearly fell off going in a straight line, it was Luke’s turn to take a tight corner too fast which saw him gamely trying to balance on the edge of the concrete slab of road before ending up on the verge – he did hold it though, able to stay up and ride out of it.

We arrived at the Menin Gate in Ypres, scene of the nightly last since the First World War. Hannah and I had given it a thorough look over the year before, eventually finding our surnames on there. I wasn’t fussed about stopping because of this so hit the Ypres town cobbles at speed – the route was slightly different this year, going straight on through town instead of left. This meant even cobble-y fun!

I lost Luke on the next stretch, aware I was borderline overdoing things and that I’d be dropped anyway once we reached the middle climbing section. I ended up dropping in with a group (full of Brits from two clubs I won’t name and slag off publicly…) that was reasonably alright speedwise, but it turned out they were awful bike handlers. Every single corner seemed to pose trouble and needed heavy braking, scaring the crap out of me whilst I was busy drinking one time. I ended up dropping them as riding on my own was going to be better.

The first hill was the Mont de Chats, I didn’t see any on it though. A steep drag to start, followed by another and somehow another one too for good measure. I remembered from last year that this was a long one so found a rhythm. I passed the biggest person I’ve ever seen on a bike on the way up – he was so high up, even compared to me, that it felt like he must be 2 metres tall (I’m only 187cm). The descent was very long and fun, always make it worthwhile going up when it’s good going down.

The next hill was Kokereel, where I took it easy. Zwarteberg felt worse than last year but I was somehow quicker. It’s a short but very sharp climb that averages 10% for 0.2 miles. I threw my chain off for some entertainment at the top whilst trying to get back into the big ring for the fun descent. Reaching Bailleul, it was time for my first feed stop of the day – I figured I’d lap up the sun and wait for the rest of the Gorillas. They eventually arrived 25 minutes later, not a bad lead I had. James didn’t look happy, the hangover working through.

The next section had the Baneberg and the Kemmelberg to look forward to. The Baneberg tops out at 21% but only very briefly – it only takes around 90 seconds, so a blast of power can get you up no problem. The Kemmelberg is a different story. The road winds its way up to around 9% to take the speed out of you before introducing some proper Flemish cobbles. The Kemmelberg then turns up the wick a bit more and a bit more. The creeping death is finalised once the hill hits 23%, on cobbles.
The pros the next day struggled – us mere mortals do all we can just to physically get up it. I’d not walked in the previous two years, but this year, unable to get into my easiest gear – I walked the last little bit. Still, beat James who’d ridden the whole thing.

From the Kemmelberg you then hit the Plugstreets, gravel roads linked to World War I landmarks that are similar to Strade Bianche. I always enjoy attacking these and going fast on the gravel. They’re something fun that we tend not to see very often in UK sportives. Once they were done with, we had the final feed stop. Fully refreshed we made short work of the section to the river.

Once on the river, you know you’ve only got 20 miles left and that they’re pretty much perfectly flat and traffic-free. This year for the first time, I would get to have a tailwind to play with too. I’d led the Gorillas from the feed stop and was still tapping along at around 21mph, then every now and again one would a little spurt, burning brightly before coming back into the pack. We eventually got caught by a large pack that shook things up.

We’d been caught on a small rise leading away from the river briefly and it needed a sprint to make contact. It then took some hanging onto, every corner was taken quickly and sprinted out of back up to speed. The built up area around Menen was dispatched, it turns out Belgian cyclists don’t slow down for horses or that Belgian horses don’t mind (not that they should be there in the first place…). We watched someone spectacularly fall off whilst going in a straight line – he did well to fall off where he did, a bit further on and he’d have been in the river.

The tiny bump from the river to the final main road was tough but I hung on. Then there was the simple matter of doing 2 miles averaging 26mph – 88 miles into the ride. I looked back to find there were just 8 of us left and no other Gorillas. As tradition dictates, I beat the others in the sprint to the finish line in Wevelgem.