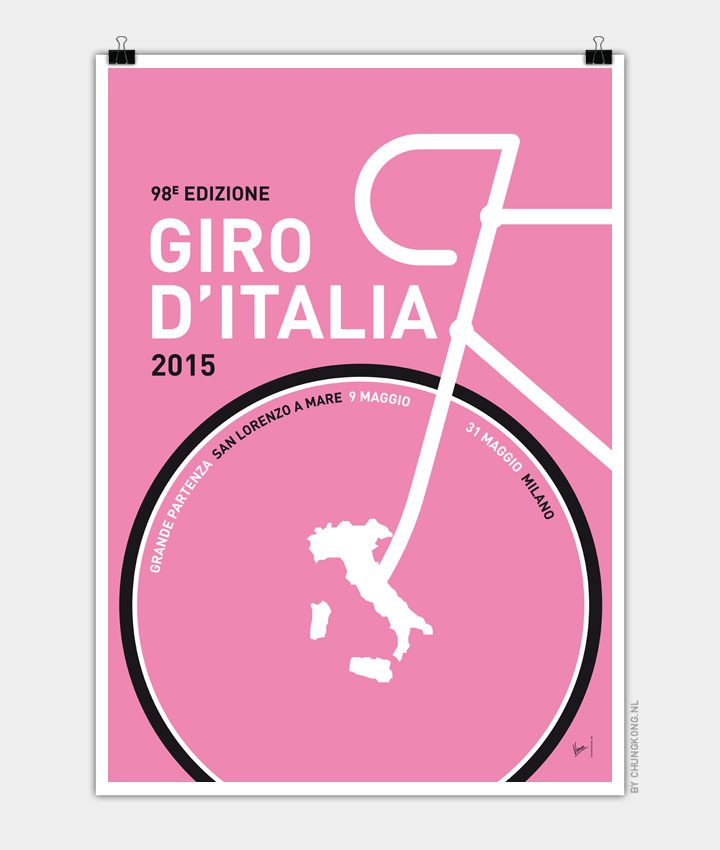 So far we’ve had a varied week of racing with the shorter hilly stages proving to be exciting. A full run-through is below.

Stage 1 was the 17.6km Team Time Trial which was won by one of the favourites and gave Orica-Greenedge the Pink Jersey at this stage for the second year running. Simon Gerrans had the honour of wearing the first one.

In the GC race, Contador gained 6 seconds over Fabio Aru and 20 over Richie Porte.

Here was the first sprint stage and it was marred with crashes on the Genoese seafront. A peculiar one is when someone on a fixie attempted to join the peloton and wiped it out.

Sky’s Elia Viviani won the sprint after Andre Greipel went too early, Sacha Modolo nearly got punted into the barriers and Moreno Hofland just faded at the last.

A huge breakaway went off on this stage and nearly made it but it ended up being a sprint for the powerful. Michael Matthews won the stage whilst in the Pink Jersey and held onto it for another day. Philippe Gilbert’s attempts to take Pink were thwarted as he took third.

One of the pre-race favourites Domenico Pozzovivo crashed out heavily, landing on his face, and had to abandon.

Pavel Kotchetkov took the Mountains Jersey that he’d hold onto for a few days.

Stage 4 again saw a large breakaway and was a very hard stage to predict on paper. The strongest of the breakaway kept ahead with Cannondale’s Davide Formolo taking a breakthrough solo win.

Some decent pacework by Astana’s Mikel Landa meant that only the strongest GC contenders stayed on the same with Jurgen Van den Broeck and Rigoberto Uran losing 40 seconds and Ryder Hesjedal, Franco Pellizotti and Benat Intxausti all lost minutes.

Another day, another solo breakthrough win. Jan Polanc finished 1 minute 22 seconds ahead of the field after losing his breakaway companions on the final climb and proving the strongest rider.

Aru, Contador and Porte all finished together again with Uran losing another 30 seconds and everyone else upwards of two minutes. A three-horse race is definitely developing. Alberto Contador moved into the race lead, 2 seconds ahead of Fabio Aru and 20 ahead of Richie Porte.

Viviani keeps his lead in the Sprinters Jersey and stage winner Jan Polanc received the Mountains Jersey for his efforts.

Nippo – Vini Fantini rider Daniele Colli hit a spectator’s camera at full speed and crashed breaking his arm in horrendous fashion. Involved in the crash was Alberto Contador who dislocated his shoulder twice but entered the overall lead.

Unable to wear the pink jersey on the podium, Contador still maintained he would carry on and race. Andre Greipel’s win saw him take over the lead of the Sprinters Jersey.

The longest stage since 1989 saw all the GC contenders reach the finish at the same time so no change in the classification. The finish was preceded by a decent hill that allowed the power sprinters and genuine hill riders to attack the finish.

Diego Ulissi won the stage ahead of Movistar’s Lobato and Simon Gerrans. A stage for the non-usual contenders was marked out as one for a breakaway win but the length ultimately put pay to their plans.

A large breakaway with strong riders such as Pellizotti, Betancur, Niemiec and Intxausti escaped and a couple managed to stay away until the finish.

The more important battle was seen behind where Fabio Aru tested out Contador’s shoulder with repeated attacks. Ultimately the big three and Uran managed to finish on the same time as Contador managed to keep with Aru throughout.

By taking the stage win Benat Intxausti also took the lead in the Mountains jersey.

In many ways a similar day as the one before it. A strong breakaway of Betancur, Slagter, Geschke, Tiralongo, Hesjedal and Kruijswijk stayed away until the finish with Paolo Tiralongo finishing 20 seconds ahead of second-place (sound familiar?) Steven Kruijswijk and Simon Geschke.

Aru again repeatedly attacked Contador who had the answers again, however, Aru managed to gain 1 second on Contador and Porte by sprinting to the finish. Rigoberto Uran’s overall hopes took another bash by losing 50 seconds to the contenders and it’s hard to see how he will pull it all back.

Simon Geschke mopped up the KoM Points and we had another new leader.