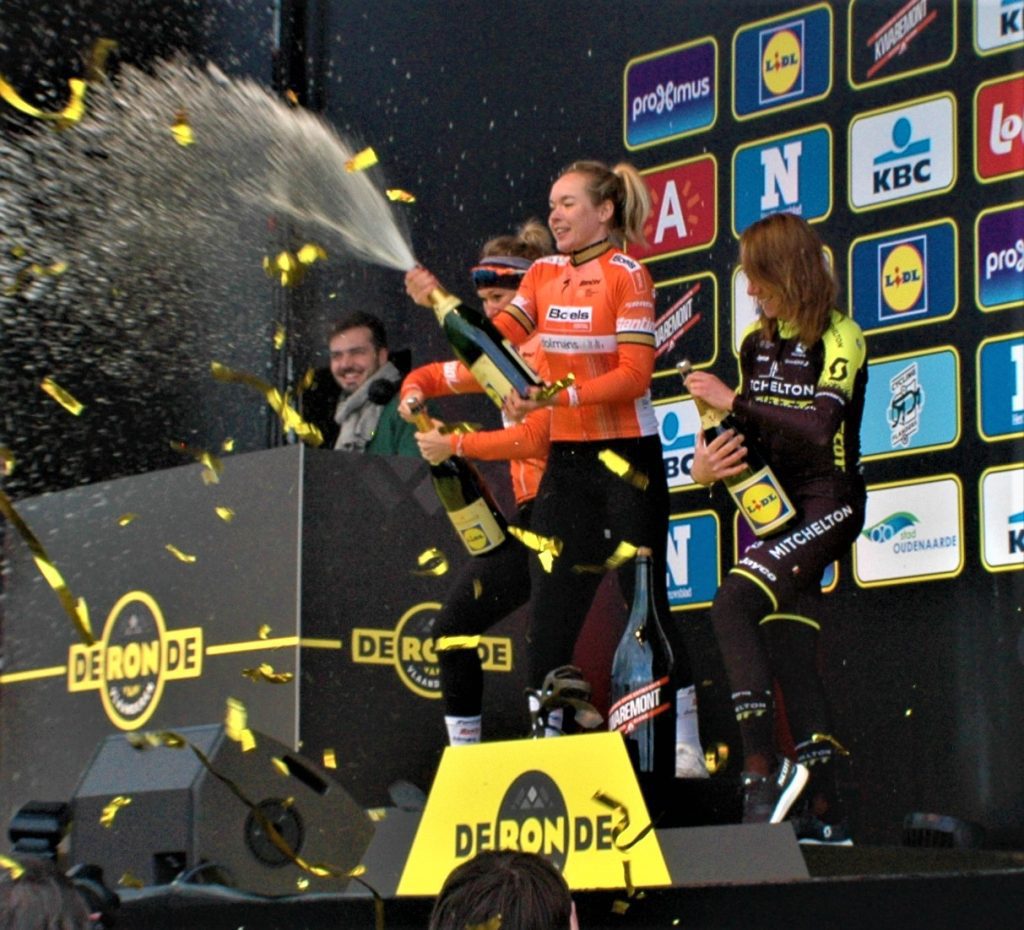 The first Women’s Tour of Flanders took place in 2004. The route followed the last 55km of the men’s race with a bit before it to take the distance up to 94km. The finish parcours from that time is now used for Omloop het Nieuwsblad. Riders climb Kapelmuur before riding the tree-lined Bosberg. Zulfiya Zabirova won the first race with an attack on Kapelmuur itself.

The second edition saw a mishap in the final kilometres as a chasing group rode the wrong way. They ended up crossing the finish line from the opposite direction to the race and 20 riders were disqualified, including some big names. Mirjam Melchers won the race in a head to head sprint with Susanne Ljungskog. Melchers retained the title in 2006.

The Women’s Tour of Flanders gained more distance each year. When Nicole Cooke won in 2007, it was up to 122km in length. 2009 saw the biggest bunch sprint yet with 15 riders contesting the win in the final kilometres. The biggest change to the race took place in 2012 as the finish moved to Oudenaarde. This changed the finish so riders went over the Oude Kwaremont and the Paterberg in the final before a flat 10km ride to Oudenaarde.

The parcours continued to reward attacking riding. Ellen van Dijk won in 2014 with an attack 28km from the finish. Then Elisa Longo Borghini won the following year with an attack 30km from the finish. Even when a race wasn’t won solo, only small groups made it to the finish together. The 2017 race was longer again at 153km and saw the first bunch sprint in many years. Coryn Rivera beat 17 others to the win.

The race reverted to type in 2018 with Anna van der Breggen winning with a solo attack nearly 30km from the finish. 2019 saw a group of 3 holding onto a few seconds advantage after the Paterberg with Marta Bastianelli outsprinting Annemiek van Vleuten and Cecilie Uttrup Ludwig. 2020 saw Ann van der Breggen and Annemiek van Vleuten cancel each other out, allowing Boels-Dolmans rider Chantal van den Broek-Blaak to escape and win solo. Last year saw Annemiek van Vleuten become the first multiple winner of the Tour of Flanders since Judith Arndt in 2012. Attacking the Paterberg and finishing solo for her first win in the race since 2011.

No early breakaway was allowed to disappear down the road. Only Natalie van Gogh gained a minute before being reeled back in. The peloton was losing riders though thanks to crashes and attrition on the climbs. It was the Muur van Geraardsbergen that ignited the race with 58km to go.

6 strong riders gained a gap at the top – d’Hoore, Niewiadoma, Majerus, Van Dijk, Brennauer and Moolman – but didn’t push on. The peloton now only had 30 to 40 riders left in it. Boels-Dolmans pushed hard on the Kanarieberg to whittle those numbers down further. They did the same on the Kruisberg, Amy Pieters reducing the peloton down to 10 riders.

Afterwards, Anna van der Breggen attacked. Ellen van Dijk just missed the move and was unable to join her. The disorganised chase group ha the presence of 3 of Van der Breggen’s teammates. By the foot of the Oude Kwaremont, Van der Breggen had a lead of a minute.

Ashleigh Moolman attacked that climb, reducing the chase group to just 9 riders. Niewiadoma then attacked the Paterberg to reduce the numbers further. Just 4 riders chased Anna van der Breggen but she now led by 90 seconds with just 10 km remaining. The chase never got close and they were re-joined by some riders they’d dropped on the climbs.

The Paterberg forms a focal point for the women’s race as well as the men’s race. Crowds line the steep cobbled climb that often decides the race. In 2019 it helped distance those with tired legs, Kasia Niewiadoma, in particular, that day.

The climb is 0.4km at an average of 12.5%. The steepest part reaches 20% near the top where riders find themselves grinding up the final metres.