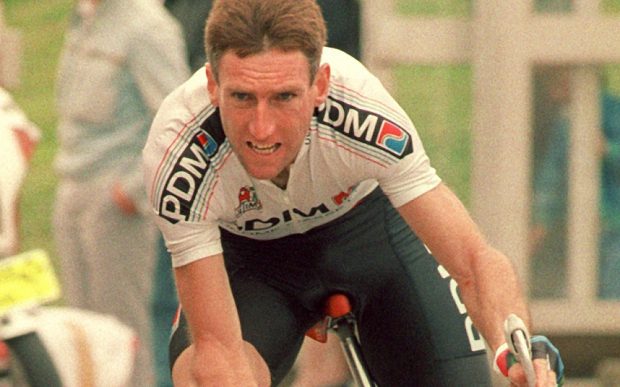 Kelly started his career by getting a ban for riding in apartheid-era South Africa as prep for the 1976 Olympics. Banned from them, he moved to France to race, won the Junior Il Lombardia and the rest is history.

With Roche now on the scene, it inspired Kelly to win more stage races. Paris Nice was won 7 times in a row – a feat that probably won’t be repeated. Also the Tours de Suisse, Basque Country & Catalunya were won repeatedly and the Vuelta too in 1988.

Kelly won 3 Il Lombardia and won twice at each of Milan San Remo, Liège Bastogne Liège & Paris Roubaix. Only the Tour of Flanders was needed to complete the set, Kelly finished 2nd there 3 times. He came closest in 1986, losing the win from a small group sprint to Adrie Van der Poel. 1,200
riders turned up to see his final race in 1994.

Kelly was almost at the end of his career when he won his final monument. The 1992 Milan San Remo was raced as it often is today. Everyone hangs on until the Poggio, then the strongest riders attack and try to
hang on to the finish line.

Moreno Argentin attacked first and gained a gap. Maurizio Fondriest tried to join but didn’t fully close the gap. The descent from the Poggio is full of bends and hairpins. The very best of descenders can use their technique to
pull out gaps and that’s what Kelly did – closing around 15 seconds to join Argentin as the descent reached the flat final kilometre.

Kelly forced Argentin to lead out the final sprint with the peloton only a few seconds behind. As Kelly came round Argentin to win by a bike length, riders crashed in the peloton. Johan Museeuw finished 3rd, only 3 seconds behind. Sean Kelly also won himself a sponsor bonus by wearing a rather odd-looking, to modern eyes, white helmet.