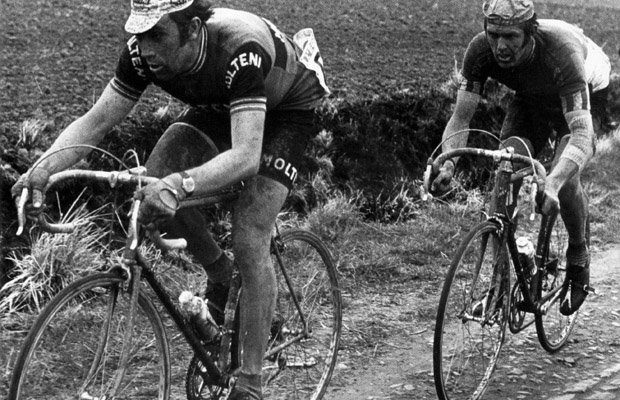 The most successful cyclist ever. Generally if there’s a quiz question about cycling, your best bet is to answer Merckx.

A year after turning pro, Merckx won Milan San Remo for the first time. A race he’d go on to win 7 times in 10 years. He also dominated the Tour de France and Giro d’Italia with 5 wins in each of those races. He then won the
Vuelta in 1973 to complete the set. He also often won the Points and Mountains jerseys in Grand Tour victories, unquestionable dominance over his rivals.

Aside from the lengthy list of Classics palmares, Merckx also won the World
Championships 3 times – a joint record. He also set the Hour Record in 1972 with a distance that stood for decades. Merckx still holds the record of most stage wins at the Tour de France.

The years of his peak were 1968-1975. After that he was still strong with top-10s at Grand Tours and even another Milan San Remo win. The stream of wins dried up and illnesses struck Merckx who retired a few months into the 1978 season at the advice of his doctors.

A true great, no-one else has the depth and breadth of his palmares.

Merckx had already whittled the bunch down to just 20 riders after the crash of rival Walter Godefroot in the rain. He followed it up with attacks on the Oude Kwaremont and another on Kapelmuur but couldn’t shake his
companions at the front of the race.

With 70km to go, on an innocuous stretch of road, Merckx just simply powered away from everyone else. The gap slowly crept out from a bike length to something uncatchable.

Despite the protestations of his directeur sportif, who told Merckx he’d never survive in the headwind, Merckx pushed on. Over the next 25km, his lead got closer and closer to 1 minute.

The wind and cold finally sapped the effort from the chasing pack and the gap suddenly begins to grow quickly. The elastic is well and truly broken. Merckx continued to push on and by the time he reached the finish line, he’d won by 5 minutes and 36 seconds. Truly epic.