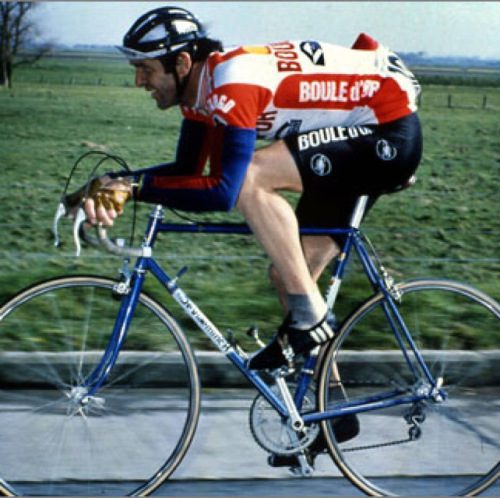 Roger de Vlaeminck started quickly, he won his first professional race – Omloop Het Nieuwsblad in 1969. The following season the first monument victory was ticked off at Liège Bastogne Liège. De Vlaeminck went on
to be one of only 3 riders to win all 5 of cycling’s monuments. Paris Roubaix was won for the first time in 1972, Milan San Remo in 1973, Il Lombardia in 1974 and finally the Tour of Flanders in 1977. He became known as ‘Mr Paris Roubaix’ after notching up 4 Paris Roubaix wins – 1972, 1974, 1975 & 1966 – and a number of other podium placings. His skills as a World Cyclocross Champion helped.

He also won the Giro d’Italia Points Jersey 3 times and Tirreno-Adriatico 6 times in a row. Using the race as a warm-up for the Spring Classics. De Vlaeminck won stages at each of the Grand Tours, 1 at the Tour de France, 22 at the Giro and 1 in the Vuelta in his final season in 1984.

De Vlaeminck had an intense rivalry with Eddy Merckx whose career ran in parallel to his own. When it came to the Spring Classics the two fought for every victory with no let up. It’s to De Vlaeminck’s credit that even though he was racing in the Merckx era he won a monument every season in the 1970s, with 1971 being the only exception.

Held in sunny conditions, the cobbles were still slippery and muddy from rain in the previous days. A lead group of Roger de Vlaeminck,Eddy Merckx, Marc Demeyer and André Dierickx managed to escape.

With only 8km left of the race to go, Eddy Merckx had a puncture. It was quickly repaired and Merckx stunned the group of 3 by regaining contact. Merckx, in the rainbow bands, attacked as soon as he made contact and De Vlaeminck was the first to respond.

The group stayed together though. On the velodrome itself, de Vlaeminck stayed high up on the track as Merckx opened up for a long sprint with half a lap to go. The effort to catch up had tired him though. Roger de Vlaeminck sat on Merckx’s wheel but came round to just beat Merckx by a tiny margin for his 3rd victory, waving his arms madly in celebration. Looking back, De Vlaeminck himself now considers the 1975 race, the finest victory in his career.