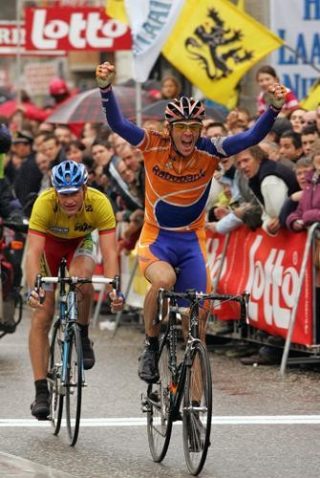 Despite its lower prestige, Scheldeprijs is in fact older than the Tour of Flanders. The first was in 1907, 6 years before De Ronde. The first editions would start and finish in Antwerp, with the finish being on the now demolished Zurenborg velodrome. The race start subsequently moved to the outskirts of Antwerp, until 1996 when it was moved to the Grote Markt Antwerp’s centre.

The race contains some flat cobbled sections but unlike other races, they don’t play a pivotal role in the result. The odd small split may happen but the pack finds itself back together by the time it gets to the finishing circuit in Schoten.

The parcours was changed substantially in 2018 with riders now
starting further west before heading onto some of the Dutch North Sea
islands. The hope is the wind from the North Sea shakes up the race.
The route then turns inwards to its traditional finish in Schoten.

Johan Museeuw, who surprisingly never won Scheldeprijs, chose the
2004 edition to be the last race of his long career. He finished safely in the
main bunch in 77th place.

Scheldeprijs is nearly always won by a sprint finish in modern times. 2005 was one of the few times it hasn’t been.

An innocuous breakaway containing unheralded riders Tomas Vaitkus and Thorwald Veneberg attacked the peloton and were allowed a generous 15 minute advantage. A crash with around 100km to go hampered the chase, so did the drizzle that now fell on the riders.

With 50km to go, the gap was still at 11 minutes. It was still 8 minutes with 17km left. They were never caught. Vaitkus led out the sprint but Veneberg was able to sprint past with 250 metres to go and take the win.

The Schoten finishing circuit is one of the few sections to still be in the race after the race parcours re-design that started from 2018. The circuit is around 15km long.

The circuit is raced 3 times, giving the sprinters a chance to line themselves up perfectly for the finale. A bend was added before the finishing straight in recent years to help keep riders safe.