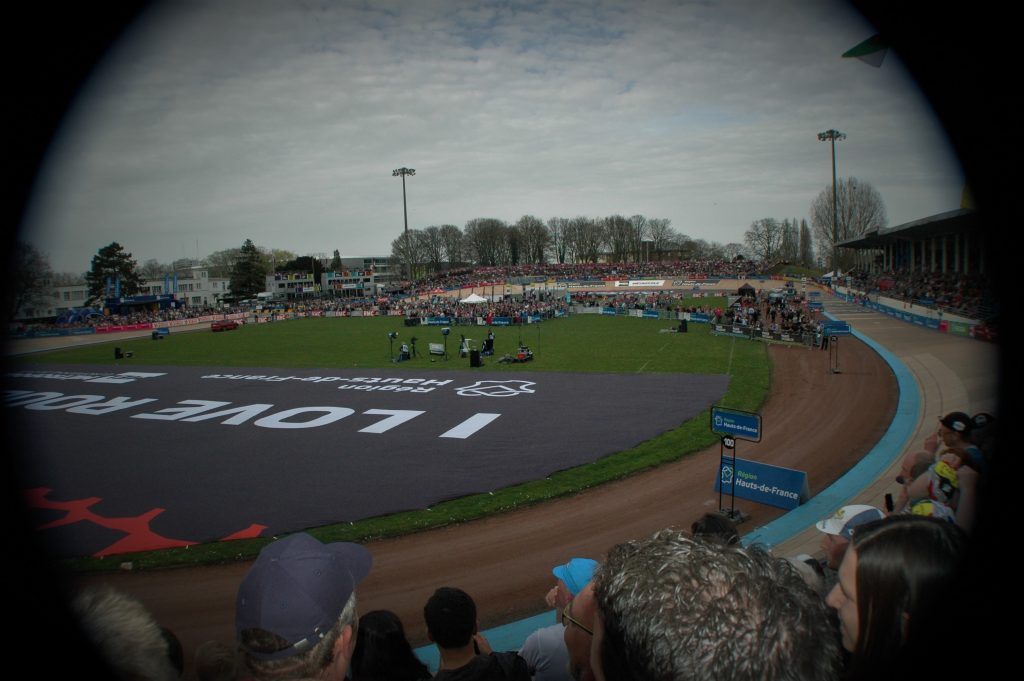 These days there are two velodromes in Roubaix. One is indoors and not even 10 years old yet. The other is the immensely iconic outdoor one that sees the finale of Paris Roubaix.

Officially known as the Vélodrome André-Pétrieux, it has held the finish of Paris Roubaix since 1943. That is except for 3 years in the 1980s where the finish moved to just outside the offices of race sponsor La Redoute. Its iconic position in the race as meant that it has seen its fair share of history. I’ve been lucky enough to visit in 2013 and 2018.

The setting for many legendary post-race photos are the showers at the Roubaix Velodrome. Split into individual cubicles, each cubicle has a small plaque with the name of a victor of Paris Roubaix. After racing in the dust and mud, it’s a place to take stock and literally soak it all off. The photos of shell-shocked riders throughout the ages look eerily similar to the expressions of wartime soldiers from grainy black and white photos.

Only finishers of the race get to visit the showers afterwards, so each rider that makes it there has won a small victory. It’s truly a place to wash off the effort of the race beforehand.

Paris Roubaix has seen its fair share of controversies and the velodrome in particular has played its hand in one edition.

1949 saw a leading trio of André Mahé, Frans Leenen and Jésus-Jacques Moujica reach the velodrome first. An official (or a policeman) pointed them down a side-road instead of their route into the velodrome. The road was intended to be used only by cars of race officials but was also narrow and getting busier. Moujica tried to turn around but in doing so, fell off and broke a pedal. Now a pair, they rode around the outside of the velodrome. Leenen and Mahé then found a small gate which led onto the banking of the track. They used it and finally were racing again. Mahé won the sprint and appeared to win.

Behind all this, Serse Coppi (brother of the great Fausto Coppi) was about to win the bunch sprint behind this trio. Fausto encouraged Serse to create a fuss and complain to the commissaires. Mahé hadn’t ridden the full and correct course so couldn’t claim to have the won the race according to Fausto. If anything, by the letter of the rules, Mahé should be disqualified. So, after having already ridden a lap of honour, Andre Mahé was replaced by Serse Coppi as the winner.

The French Cycling Federation, Mahé being French, took up his cause after the race and said he should be the winner. The Italian federation naturally disagreed and supported its rider. It took until August for the UCI to make an initial decision to void all of the results from the race and declare no-one the winner. This situation pleased no-one and in November 1949, Mahé and Coppi were declared joint winners in one of the few tied results in cycling. The 1957 Liege Bastogne Liege is another high profile tied result.

Technically not a velodrome finish, the 1988 version saw a plastic bag decide the winner. The 222km long breakaway in that race is still the longest attack to have won Paris Roubaix. 13 riders were a part of it, including Dirk Demol, Thomas Wegmuller & Allan Peiper. By the time of the infamous Arenberg, just 7 of the original 13 riders remained.

Wegmuller was pulling the break along and the peloton behind started to get twitchy. Contrary to usual cycling tactics, Wegmuller’s teammate, favourite Sean Kelly, began to chase him down. Wegmuller hammered the Carrefour de l’Arbre and only Dirk Demol could keep up. He’d had some encouragement from former winner Roger de Vlaeminck who’d told him the break would stick and he could win. Behind them, Kelly had crashed and the chase stalled.

As Wegmuller and Demol closed in on Roubaix, a plastic bag jammed itself into Wegmuller’s rear derailleur. Demol waiting for his companion but whilst most of the bag was removed, Wegmuller could no longer change gear. The sprint was easily won by Demol. Lauren Fignon was the first of the pack to finish in 3rd, 2 minutes later. Demol would never win another bike race. One of his regrets was that the race didn’t finish in the iconic velodrome.

Fast forward to the 2006 edition of Paris Roubaix. The race deciding move had already taken place, Fabian Cancellara attacking from a lead group with Vladimir Gusev on Camphin-en-Pévèle. The pair had a gap of 10 seconds before Cancellara dropped Gusev on the Carrefour de l’Arbre. With a growing 30 second lead with 10km to go, the chasers encountered a train crossing that was closing. Leif Hoste, Peter van Petergem and Gusev managed to squeeze through, whilst everyone else waited. The riders stuck included Tom Boonen, Alessandro Ballan, Juan Antonio Flecha and Bernhard Eisel.

Cancellara pressed home his advantage, winning by over a minute in the velodrome. Hoste won the sprint for 2nd place ahead of van Petegem. But 10 minutes later, the 3 who ignored the train crossing were disqualified from the race. This promoted Tom Boonen to 2nd place and Ballan rounding out the podium in 3rd place.

The 2015 edition also saw a train crossing affect the race briefly as some riders skirted through as the barriers landed on them and some waited.

Another Paris Roubaix with a small group entering the velodrome together. This time however, they were caught by a pair of riders behind. The 5 riders rode the last lap together.

Edwig van Hooydonck sat at the back and went up the track to get some height before swooping down for a long sprint. Steve Bauer jumped onto his wheel, waiting for his opportunity. Eddy Planckaert came over the top of them both, causing van Hooydonck to move off the inside line and allow Bauer through. Van Hooydonck faded back as Planckaert gained on Bauer who’d had the shortest line to the finish. The finish was too close to call live and the photo finish showed 1cm difference between Planckaert and Bauer. Planckaert would take the closest Paris Roubaix velodrome victory.