Extraordinary performance by Rio Miera-Meruelo-Cantabria Deporte in the fourth round of the UCI Junior Nations Cup held in France. In the second stage of the Tour du Gévaudan Occitanie held this Sunday, our cyclist Lucía Ruiz has won a historic victory in a massive sprint. This feat is already part of the history of this club that with effort, affection, dedication and the support of sponsors and collaborators, has been growing throughout these 18 years of life.

The 67-kilometre stage starting and finishing in Mende gave no respite. The cyclist from Riaño has once again demonstrated her magnificent state of form today, prevailing after a stage with a lot of pace and constant attacks, but which did not end up making significant differences over the peloton. Lucía, always well placed in the leading positions, asserted her top speed in the final meters against very important rivals knowing how to wait for the right moment to give the definitive pull.

In that large group that disputed the sprint, her sister Laura has also entered, finishing in a great Top 20, reaching the finish line in eighteenth position.

On Saturday in the first stage, the Côte de la Croix Neuve/Montée Laurent Jalabert was reached aloft after 76 kilometres. The race was marked from the beginning by its hardness with a high speed in a very mountainous route. Lucía Ruiz made a run entering the Top 25 finishing 22nd at the finish line. She managed to be in the small group of the best until the race was definitively broken before the ascent to the final port. Her sister Laura de Ella came in 44th position after a very exhausting day. Andrea Velasco and Alba Valle also managed to finish after a hard day. Ariadna Valle and María López were also part of the team that took the start. 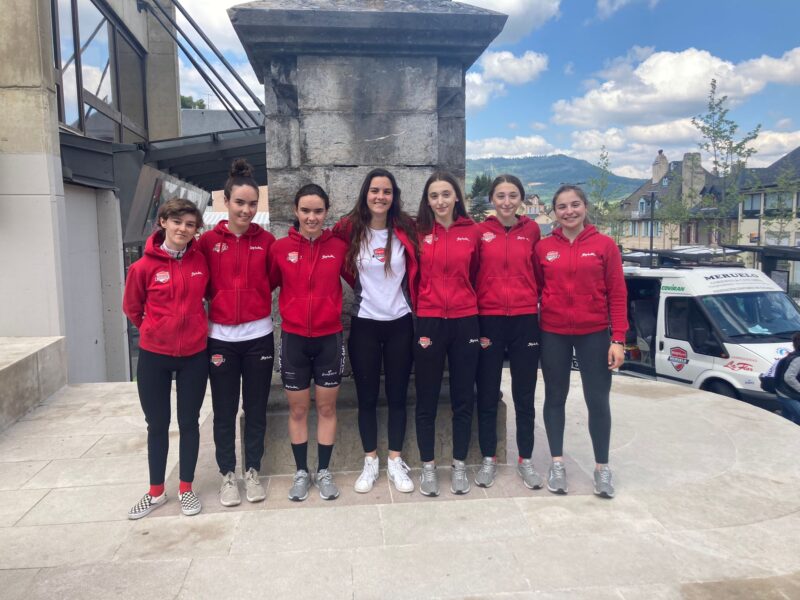 For Ana Ortega “the girls have come out wanting to suffer and take advantage of the experience, so on a sporting level I am very happy. The “veterans” have managed to function with ease and demonstrate their potential. Together they have made my first experience as a director very easy”.

The winner Lucía Ruiz commented that “after doing the first 100 meters of the race I have psyched myself up and I have been very well placed all the time. I knew I could be there, in the end I kept my position very well and when there were 150 meters left I jumped. I felt strong and everything went very well”.

Laura Ruiz valued the two days of competition. The first “I had a breakdown at kilometre 20 after the first climb and at 25 I changed the bike. I arrived at the bottom of the port in the peloton but I had already spent everything. In the second stage I felt better and in the end I tried to move forward. I have finished in 18th place and I have finished happy”.