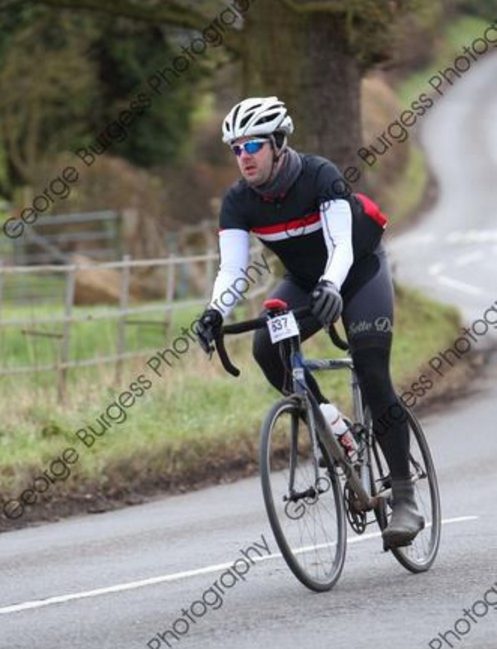 Last weekend I went out braving the cold to do the Mad March Hare sportive from Wythall, Birmingham. It’s one I’ve wanted to do for a couple of years but always sells out rapidly around the start of January as the New Year’s resolutions kick in and everyone looks for an early season target to complete. I’d managed to convince George to join me but we’d come to an agreement to do the ride at our own paces as the route was signposted so I wasn’t required for navigation – the idea being it’d give me a chance to see how I was going at ‘race pace’. I managed to find another Stratford CC rider to join but that didn’t work out particularly as planned.

We set off under the inflatable arch which housed the start point for our timing chips at the front of a group but already 2 groups behind John from Stratford CC who I’d been intending to ride a lot with. I set off at a quick pace in an effort to catch up and dropped George fairly quickly but it took the best part of 20 miles and 45 minutes for me to catch up the 3 minute advantage that John had. We’d been warned before about ice and there was plenty about at the edges of the road – it meant that corners were taken sensibly and there were plenty of maybe patches where there was water on the road that looked shiny so could’ve been an issue. Going at the quick pace it meant that I passed plenty of slower riders, probably the best part of 100, as I hunted down John.

Eventually I caught a group (containing John) heading into Great Alne where one of the signposts had been turned slightly (or caught in the wind) and wasn’t pointing where it should be. There was a bit of a conflab before it was decided that we would make the turn and the sign was righted. We headed on, getting closer and closer to the signature climb of the route, Dover’s Hill. The large group broke up on the climb after the Alcester Road with a number of Boldmere Bullet triathletes going backwards and there was a nice period of tempo riding as we reached the village at the bottom of the large climb.

It’d been well over a year since I’d last tackled this one and with plenty of climbs left in the route I didn’t want to bury myself mid-sportive, a bit of a gap appeared between John and I as the climb ramped up around the right hand bend and it was never closed. I kept up a solid rhythm, distracting myself by looking down at the Garmin which seemed stuck on a 15% gradient for ages before the top came. I’d managed to overtake two riders and not be overtaken myself and wasn’t too far behind John at the top. The descent down into Mickleton is always a fun one, it lasts a long time and allows you to power along having given you a helpful push. We went up over the back of Meon Hill and then down into Lower and Upper Quinton for the feed stop.

There was a great selection, I helped myself to a banana, some flapjack and a bottle refill before heading off. Strava tells me that George was only about half a mile away once I set off from the stop, the closest we managed to get on the ride. John and I tagged onto the back of a group of Beacon riders, but on the long drag up into Binton my right leg was threatening to cramp and I couldn’t keep up and that was the last I saw of those guys until the Mad March Hare finish. I ended up tucked in behind a Stourbridge rider and another unidentified rider for a 10-15 mile stretch as we went into Alcester and out the other side before the gaps on the short climbs were getting harder and harder to close as the legs reached their limit. I kept catching up again on the descents and the flat but each time the road went up, I couldn’t keep up.

I ended up finishing the Mad March Hare on my own, a few minutes behind John, exchanged my rider number for a bacon roll and sat with some of the guys I knew and had a natter about the ride for awhile. As people started leaving I set out retracing my steps with the plan to find George and ride with him to the finish, after around 7 miles and post-toilet stop I gave him a ring to find out just exactly where he was. It turned out he’d got himself into a group and someone had a missed a sign so they’d gone well off route and were in the process of doing an extra 5-6 miles – I eventually met him at Earlswood lakes and we finished the final bit together. Being a great friend I bought him a pint of the Fixed Gear Brewery stuff that was in situ to help him recover.

The official timing says I finished the Mad March Hare in 77th place out of 688 riders on the day with a time of 4 hours and 22 minutes.