Home » Majo gave me instructions to keep her near the front

Majo gave me instructions to keep her near the front 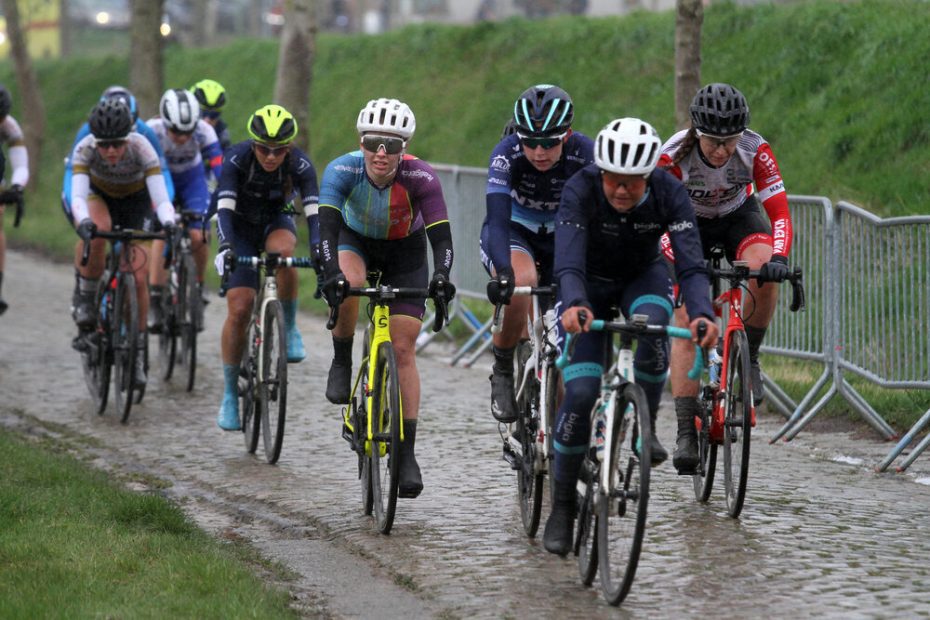 I couldn’t wait for the race season to start after the excitement of the team camp in Cambrils and meeting the majority of the girls for the first time. My first race for the team this year was Setmana Valenciana. I wasn’t in the best condition for the race after becoming sick during the last few days of camp, I was struggling for the majority, and my race ended up being short lived, but I knew it could only get better from there onwards. My hunger was stronger than ever, and I wanted more. I spent the next few days training in Girona making the most of the good weather before setting off for the next race, Omloop Het Nieuwsblad in Belgium.

Flying from sunny to snowy conditions was certainly a shock to the system. Once at our race hotel there were lots of other riders arriving from teams like Boels-Dolmans, Lotto-Soudal and Sunweb. Seeing all those other riders there, and inside I’m ‘fan girling’, thinking is this actually happening? These are the teams I’ve grown up watching and following, but at the same time I have to remind myself that I deserve to be where I am today. At Omloop Het Nieuwsblad I felt my condition was improving, just positioning let me down, but I remained positive and kept my head held high for the next race, which would be Le Samyn, but at that moment I didn’t know that it was going to be my last race for a while.

The day before Le Samyn, we had breakfast as normal. The granola at the hotel where we were staying was super tasty and delicious! I had it every day. Now for the pre-race ride. It was raining, so the majority of the girls chose the indoor trainer, but I couldn’t think of anything worse than being sat on an indoor trainer, so I wrapped up warm and braved the rain. Once back and dried off it was a chilled rest of the day. I read up on the course and watched the previous year’s race to study the course better. That night before dinner we had the usual team meeting and went through key sections of the course and what our plans for the race would be. With how my previous two races had gone, the main objective for me was to make it to the finish, and if I got to the pointy end of the race, help Emilie or Majo get the best result for the team.

The race started in Quaregnon, headed to Dour and completed three circuits near Dour, which included lots of cobble sectors in quick succession. We had the usual team presentation and then I made sure I did a good warmup on the road as the team thought the race might start quite hard as the road went slightly uphill for a few km’s, but it turned out it didn’t start too hard after all. Better to be prepared than not. I gave myself a goal of focusing on staying at the front of the race, being in the first 20 to 25 riders. It’s much harder to stay at the front than you might think. The first cobble sector was at 26km and it was a sprint into it from 5km’s out. Luckily, I positioned myself well and was in the front half of the peloton. It’s crazy how easy and quickly the peloton breaks up going over a few km’s of cobbles. The peloton was in pieces and soon enough a group of about 10 riders were up the road, the team were happy with the situation as Majo was there.

Emilie and Sara were with me in the group behind, so we had back up if something happened to Majo. I was really happy to have made the much-reduced peloton. I kept reminding myself to eat and drink at every moment as who knew when the fireworks would go off again. Majo and several other riders from the break unfortunately came back to the reduced peloton as the head of the race began to split up. We now had to rethink our plan for the final. Emilie wasn’t feeling good so decided we would ride for Majo. With 5km to go, Majo gave me instructions to keep her positioned near the front until Lonneke Uneken came to the front and with 1.5km she latched on to her lead out. Once I had finished my main job, she told me to cover her back wheel for as long as possible to the finish. I was so pleased for Majo at the end claiming 8th place. I kept sprinting to the finish for 13th place and first British rider.

This gave me amazing confidence going into the next race which was scheduled to be Ronde Acht van Westerveld but sadly, that never happened for reasons we now know all too well. I can’t control when the next race is going to be, but I can control what condition I am going to be in when that race comes, so at the moment I will continue to focus on keeping healthy, training hard and loving life.