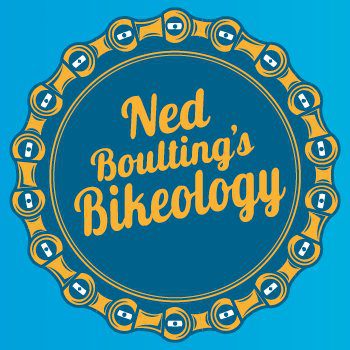 Ned Boulting has pretty much become a fixture of the Tour de France each summer having reported on it since 2003. Up there with the wordsmith Gary Imlach as seemingly ever-present on our screens throughout the month of July. He’s also taken to performing a one-man show, using the skills learnt years ago as a Cambridge Footlight. I went and paid it a visit in Stafford’s Gatehouse Theatre.

The story starts the day before the actual show. Somebody sat on a train home from London got his days wrong and posted on Twitter how much he was looking forward to seeing Ned Boulting and Bikeology. Not only that, but he tagged the host of the show to make sure that the mistake was seen by the maximum amount of people possible. Cue the ribbing of the internet.

Having turned up on the correct day, we were treated to a Trainspotting-esque video with the ‘Choose Life’ speech updated to ‘Choose Bikes’, before Ned bursts in from a side door on a Brompton. Starting with a bang, we’re given a whistle-stop tour of topics such as Ned’s bikes, his car troubles and what it’s like to work with former pros David Millar and Chris Boardman.

We’re encouraged to be normal and not like Colin and Belinda who talk about cycling all the time, something I can definitely be guilty of. The marmite of cycling, chamois cream is discussed. A quite literal sensitive topic, it always provokes some titillation. A member of the crowd picks this time to leave and is naturally singled out. He seems to take an age to come back but has already managed to sneak back in via the rear somehow.

We were treated to seeing Chris Boardman repairing a puncture at the bottom of Horseshoe Pass, which led to a segue for last year’s competition of who could change an inner tube the quickest. This year, however they were going to pluck someone from the crowd and get them to answer a load of questions in 2 minutes. That someone was me.

I’d seen a Facebook post the day before asking for volunteers to take part. The prize was a paid trip to Mount Ventoux, somewhere that’s always been on my cycling bucket list, so worth potentially being rubbish in front of a load of people on a stage!

I debated telling Hannah beforehand but decided it’d be funnier to surprise her. As my name was called out, Hannah let slip the words ‘what the fuck?!’ quite loudly in a quiet theatre. It was worth volunteering just for that!

I made my way on-stage thinking don’t fall up the stairs (I didn’t) and was shown into a chair that would not be out of place on Mastermind. Obviously, I was bricking it but I’d done my revision during the day so hoped I would be alright. I’d run through the questions I got right/wrong but that might give an unfair advantage to my competition for the holiday!

I did, however, get 16 questions correct to take the early 1st spot on the leaderboard by some distance. We were only the 3rd stop on the Tour though, so I’ve got the best part of 6 weeks to wait to see if I win or not. I didn’t go home empty-handed, I got presented with a freshly signed copy of Ned’s book How I Won the Yellow Jumper. I wasn’t brave enough to say I’d already got a copy!

The second half of Bikeology

After the interval, we were treated to Ned setting up the Champs Elysees in Stafford complete with an Arc de Triomphe that definitely felt like a Spinal Tap homage. This was the lead into a segment all about Le Tour, the race and what it’s like to cover it. We saw Ned’s early forays, asking riders about the yellow jumper and being turned away from cycling a mountain by the French army.

The show finished with Wiggo! The Musical, a short sketch involving a lot of running around and cycling as we went through a potted history of Bradley Wiggins’ cycling career. It was a nice high point to end on.