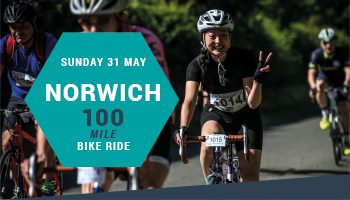 A group of 3 of us took on the 2014 Norwich 100 last weekend, it was supposed to be 4 but Luke managed to break his elbow hitting a cat at 35mph on his bike a week or two beforehand. We all did the event in 2013 and were up for another go.

We rode in together, headed to the start at The Forum and were released with a large group of others by the Mayor and a hyperactive man with a microphone at 7:40am.

I was taking things relatively easily at this point, just moving around the slower more leisurely cyclists as we all headed out of the city. On the outskirts we ended up attached to a small group of reasonably organised guys who were efficiently taking turns at the front, I took my turn and as I moved over onto the inside for someone else to move up to ride next to me….no-one appeared for a minute or so, a look at the Garmin showed I’d moved up to 23mph on the flat Norfolk roads without too much trouble and had created a big gap.

I set about catching the large group of Mulbarton Cycling Club members I’d seen glide past earlier in the Norwich 100 as they looked like they’d be a good set to ride with – I was going fast but without overexerting and was passing huge amounts of people, a minimum of 100 within 5 miles.

I took a breather behind a female triathlete on the top of the Reepham hill and two riders came flying past, obviously these were people to follow. I joined on the back and when it came to being my turn on the front we were accelerating through Reepham and ignoring the first feed stop. By the other side of the village there were just two of us.

Me and this other rider rode together averaging about 22-23mph until the next stop at Holkham Hall, we worked together, had a bit of a chat and just started dispatching people with ease. There weren’t many other people doing the speed we were and no-one seemed to want to hang onto our tail.

At Holkham Hall, I took off down the straight drive, the scene of my cattle grid jumping escapades in last year’s Norwich 100 and went hard for the Strava segment (I ended up with 5th best Overall for that stretch). At the hall, I filled up my water bottle and lost my partner amongst the throng of people.

The next phase was the long coastal road section from Wells to Mundesley. This part has quite an undulating profile and doesn’t give much chance for coasting (ha ha). I struggled to find people going at my pace, overtaking groups and occasionally resting in one for awhile. The very overweight guy on a £4k Pinarello Dogma (Team Sky bike) provided some entertainment.

The worst part about this section were the slow cyclists on the narrow roads. I was held up massively by having to sit behind cars who couldn’t overtake slow cyclists riding two abreast and who didn’t communicate with the cars behind to let them know it was clear to pass. It was very stop start and there was no real rhythm for this part until we got into Sheringham.

I ignored the feed stop there and carried on, finding myself back in a decent group of riders, yay! We zoomed along but I was flagging slightly and got carried along by another rider who also dropped off the back of that group, the ten miles before the next feed stop were a trial.

I actually stopped at this one, knowing from last year they had a grill going – some solid food instead of energy gel goop would go down well and a burger was perfect. Again it was a case of finding someone to ride with and I lucked upon a Norwich ABC club rider who set a pace at around 22mph the rest of the way back into town for the finish of the Norwich 100. We blasted past flagging riders who were crawling towards the finish making sure the last 10 miles went past in a blur back on the main roads.

I got back at 1:06pm for an overall time of 5 hours and 26 minutes. I could’ve shaved 5-10 minutes from that on the costal road but it’s a personal best for 100 miles so still very good and happy to improve on my time from last year. The other guys finished about 2 hours behind.