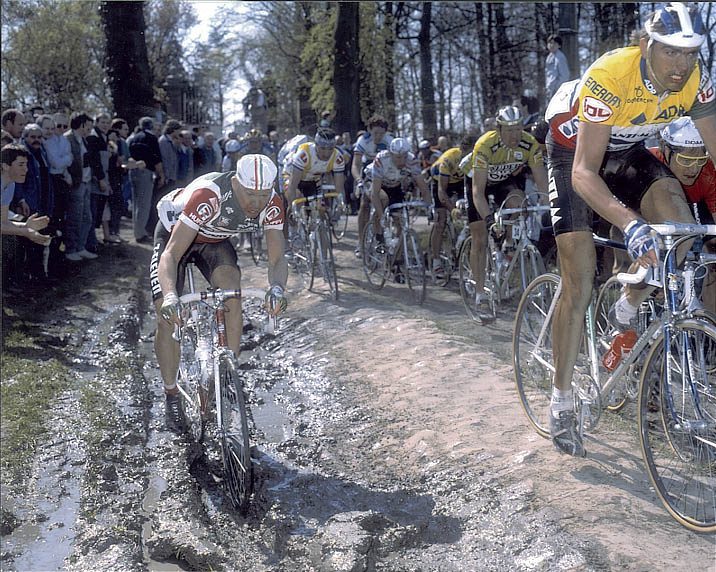 It’s that time of year for the Hell of the North – Paris Roubaix. Luckily for the riders involved, the weather forecast looks pretty reasonable. A temperature of 15 degrees is good enough to not have to wear the leg/arm warmers and with only the odd shower forecast, they should get away with not having slippy cobbles and a quagmire to deal with. We’ve got all 4 winners from the last 4 years riding and Greg Van Avermaet will be hoping to be the first to hold onto the title since Tom Boonen in 2008/9. Niki Terpstra will be hoping to be the 11th rider to win the Tour of Flanders and Paris Roubaix in the same year.

The race is known for its cobbles that traverse the North-east corner of France. They are more broken and less square than their Flemish counterparts, crashes are certainly more frequent as well. 2016 saw a motorbike fall over on the Arenberg and hit Elia Viviani whilst Mitchell Docker was on the floor already with a broken face. The same year Francisco Ventoso got his leg sliced, allegedly by a disc brake rotor. Johan Museeuw once crashed so badly that there were fears his leg would have to be amputated due to gangrene – he went on to win the race again two years later. The iconic finish on the outdoor velodrome also gives the event added character, something very rarely seen in the pro peloton. 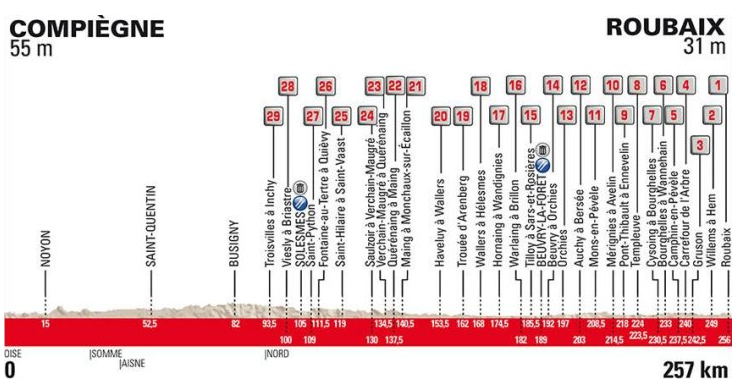 Based on form alone, the favourite has to be 2014 winner Niki Terpstra. He’s won Le Samyn, E3 Harelbeke and of course, the Tour of Flanders. He has 3 top-5 results in Roubaix, so is more than suited to this race. Quickstep’s second bet will be Zdenek Stybar, the former cyclocross world champion love this race. 4 top-10 results and two visits to the podium shows his class. Terpstra may now be a marked rider, so Stybar may be the one who is allowed to attack and go for the win. Failing that there’s Philippe Gilbert but he doesn’t have a strong history at this race, just the single finish of 52nd place.

Obviously, Peter Sagan is a contender. He won Gent Wevelgem but seems to be on the receiving end of some neutralising tactics from other teams. So far he’s struggled to break through these tactics and push out on his own, often being forced to do the bulk of the work in chasing down moves. He only has a best result of 6th in this race, so it may not happen here for him. Greg Van Avermaet won this race last year, he’s also got two other top-5 results. He’s ended up in the same group as Sagan in recent races, where the strongest riders seem to mark each other out of the race victory at their own expense. It’s a trend we’ve seen all Spring Classics season. Fellow Belgian Jasper Stuyven is in great form with 5 consecutive top-10 results in some of the biggest races. He’s finished 4th here before and on his current form should match that.

The Belgian trio of Oliver Naesen, Wout van Aert and Sep Vanmarcke will all be in the mix. Naesen has done well during the classics without that podium result, he’s probably not one of the outright favourites here but can certainly finish in the top-10. Another rider from cyclocross, Van Aert will feel right at home having to race on the potentially muddy cobbles, it’ll also give him an advantage. Another top 10 result at the Tour of Flanders should put to bed any questions about being able to handle the length of these monuments. Sep Vanmarcke finished 2nd to Cancellara in 2013 and finished 4th on two other occasions. Always a contender but seems to be missing that final sprint that will see him win these sorts of races.

Alexander Kristoff‘s performance over the Spring has been sketchy, 4th in Milan Sanremo has only been remotely matched by the 16th he got in Flanders last week. On the flatter Paris Roubaix parcours his weaknesses should be neutralised and his strengths allowed to come into play. Sky’s Gianni Moscon has had a mixed bag of Classics results too. A peak of 8th at E3 Harelbeke is his best, he came 5th last year and is another who may enjoy a race with no climbs in it. Frenchman Arnaud Demare finished 3rd in Milan Sanremo and Gent Wevelgem. 15th in the hillier Tour of Flanders was also a good results. On the flat he’s definitely in with a chance.

Finally, it’s hard to ignore Mat Hayman, his famous win in 2016 may not mean he’s capable of repeating it, but there’s always a chance. 6 top-25 results over the years shows he’s always been useful here. His form this season makes it unlikely he’ll be near the top step.

Lets start with the young guns. Mike Teunissen is coming off his breakout result of 2nd in Dwars Door Vlaanderen. He’s a former U23 cyclocross world champion so shouldn’t be phased by the cobbles. He also won Paris Roubaix at the U23 level in 2014 too for good measure. It’s not guaranteed he’ll dominate the same race at the highest level but it’s a sign of potential. UAE’s Filippo Ganna falls into the same boat, he’s spent the Winter riding on the track a lot but he won Paris Roubaix as an U23 rider in 2016. It may still be too early for him, but that’s why he’s an outsider.

The big names of John Degenkolb and Tony Martin are always mentioned. John Degenkolb won this race in 2015 and was 2nd the year before. Still not quite the same rider since his big accident, he may now be acting as an elite lieutenant for Jasper Stuyven’s chances. Tony Martin has had a very iffy classics campaign so probably isn’t in the conversation to win, but the power he’s able to put out will be useful over the cobbles. He’s only done the race twice before, finishing 76th both times. 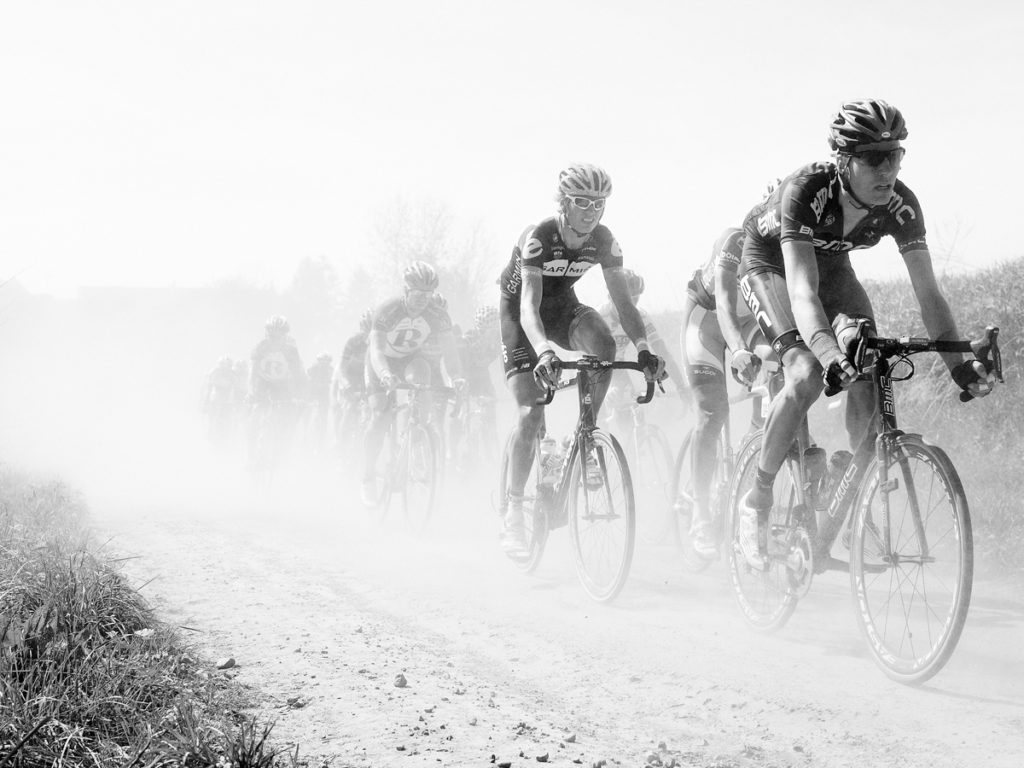 Luke Rowe seems to be recovering well from his broken leg but will probably be working for Gianni Moscon this year. He’s finished 5th before so can finish highly with some luck. Cofidis’ Christophe Laporte has good results in the flatter classics, he’s finished 20th before and I expect him to improve on that this year, as long as he can stay out of trouble.

Lastly, Sebastian Langeveld showed us some of his Classics form of yesteryear in the Tour of Flanders. He ultimately finished 22nd there, but animated some of the early attacking until caught by the group of favourites. He has 3 top-10 results in Paris Roubaix, but will no doubt be working for Sep Vanmarcke.