Sara Poidevin proved she is one of the elites of Canadian cycling by winning bronze at the 2021 Canadian Road Championships on Sunday. The Calgary resident rode valiantly in pursuit of the maple leaf jersey as Alison Jackson (Liv Racing) took top honours ahead of Maghalie Rochette (Specialized Racing).

“I was happy to share my first podium in the elite road race with two super-strong riders,” Poidevin said after the finish.

The route started and finished in Saint-Georges, Quebec and was raced on a rolling parcours amidst strong winds. The course was clearly designed to test the mettle of every rider’s ability and even featured three unpaved sectors inside the finale of the 114.6-kilometre race.

Speaking about the route, Poidevin said, “The punchy efforts made for a hard day. The overall difficulty allowed me to have some good opportunities later in the race as the others got worn out.”

A select group quickly formed at the head of the race before Jackson skipped up the road with Rochette in tow. Poidevin was the only Canadian on the Rally Cycling women’s squad and so had to rely on cohesion within the chasers to try and bring the leading duo back.

“The chase quickly became disorganised so there was no hope of a bridge and unfortunately the time gap got out of hand quickly.” 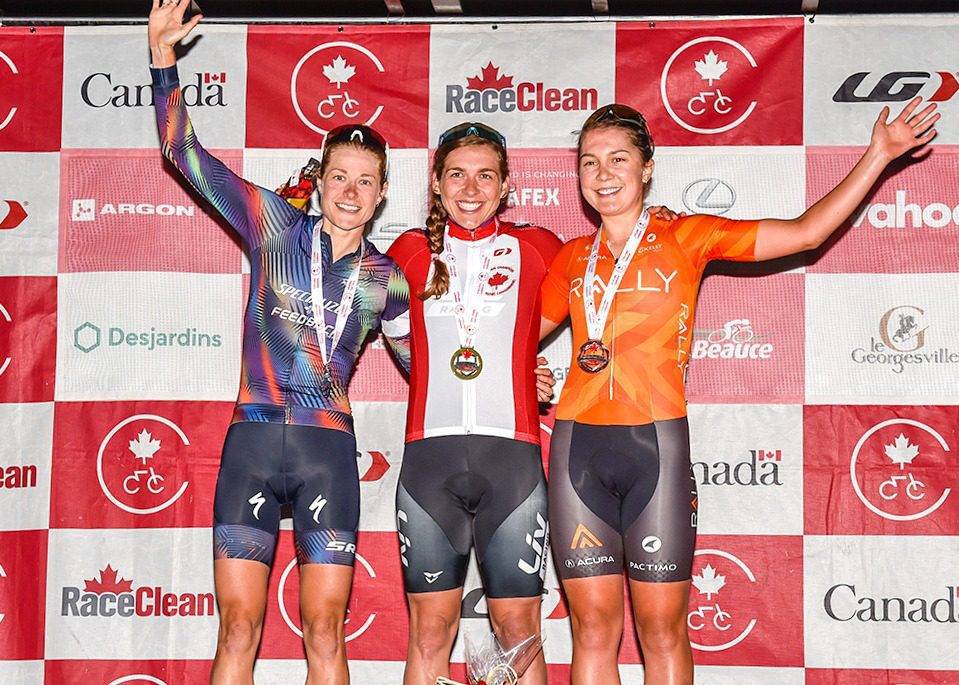 As they closed back in on Saint-Georges, Poidevin also saw her opportunity for a podium ride.

“I attacked after a fast descent and into a climb with speed. I was able to get separation and just put my head down to the finish. I’m happy to walk away with a medal.”