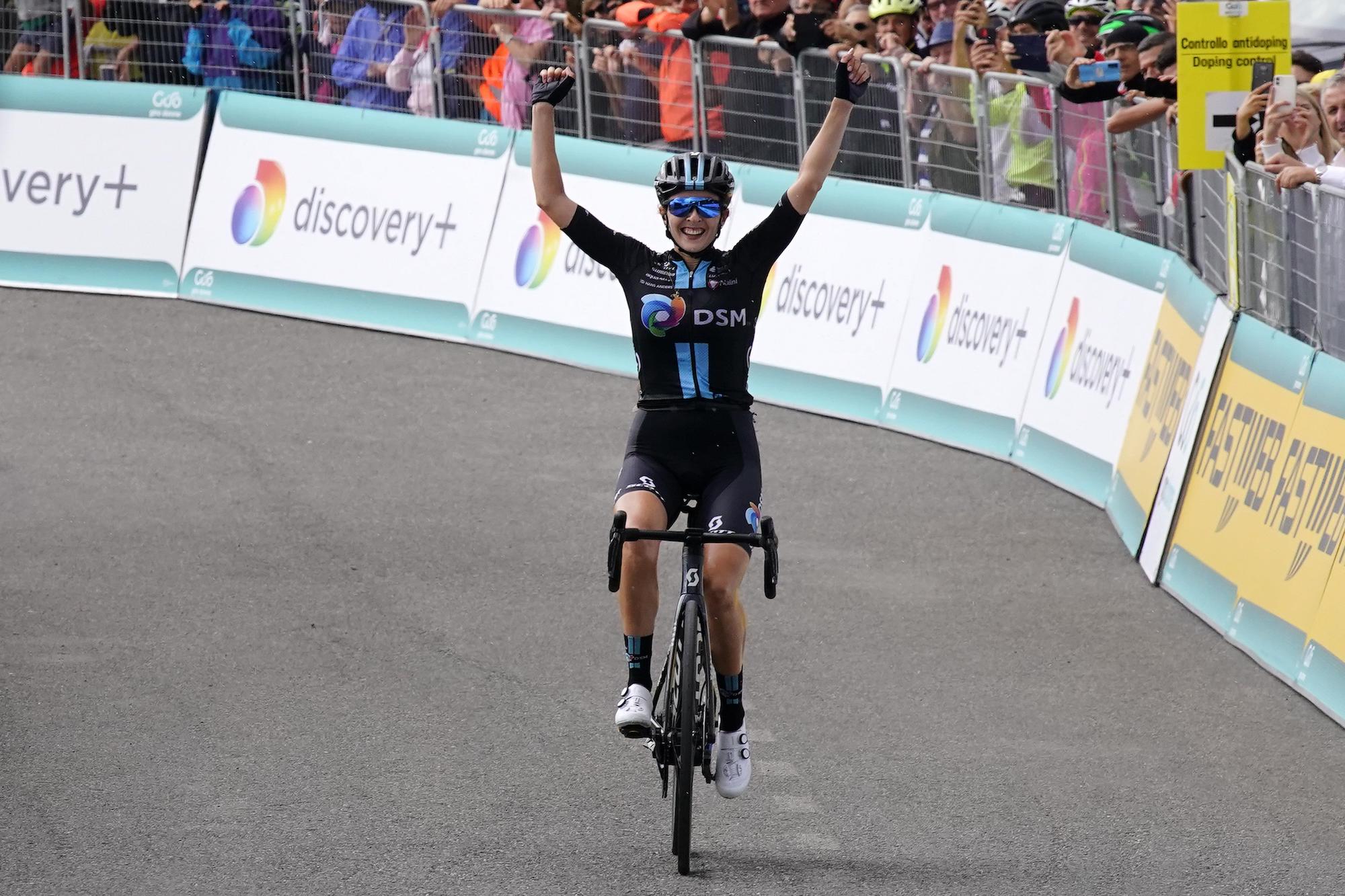 Stage 7 of this year’s Giro Donne saw the major summit finish and the highest point of the race at Passo Maniva. A tough stage that saw the best part of 40km of consistent uphill riding of which the classified climb was just the last 10km. A large breakaway of 14 riders jumped from the peloton, including pre-race favourite Juliette Labous. She kept her powder dry until the final climb where she managed the gap to the major favourite like Van Vleuten behind her to take a hugely impressive maiden Giro Donne stage victory.

The stage winner, Juliette Labous, got herself into the break early on and was still there at the end! Her entire stage was 3 hours and 23 minutes at an average of 206w @ 3.6w/kg. There were some early efforts, notably to get into the break itself but once in the break things settled down. The early efforts and her consistent climb power pushed her normalised average up to 226w.

For the Passo Maniva climb itself, Labous was remarkably consistent with her effort. Whilst still amongst other riders, it was spikier, more highs and more lows but once on her own, Labous clearly had a number to stick to for the climb. For the full 36 minutes of climbing, Labous averaged 278w @ 5.1 w/kg. There’s a small power drop about halfway through the climb but Labous holds that number almost perfectly for the rest of the ascent. The fact her normalised power matches the average power exactly is a testament to the consistency of the effort.

Her watts per kilo amount of 5.1 is up there with the best climbers in the women’s peloton. The likes of Annemiek van Vleuten have been clocked at 5.2 or 5.3 previously.

Realini was in the break with Labous but when it came to the Passo Maniva Realini wasn’t able to match Juliette Labous and finished 2 minutes and 13 seconds behind the stage winner. There’s no recorded weight for Realini so we can’t compare the w/kg but she was also measured in her climb, although not quite as much as Labous. 218 average watts with a normalised power of 221w is reflective of the early effort that Realini put in. She attacked more at the bottom, going quite hard early on before dropping off. That’s particularly noticeable in the last 10% or so where the power drops off from its previously higher levels.

It’s also notable that whilst Labous’ power was also constant and flat, Realini’s cadence makes quite large jumps and that’s reflected in her power too, it’s just all a lot less neat. She’s a young rider, still on a small team and these are areas to work on going forward if she’s to push on even further. We know she’s signed for a Women’s WorldTour team from 2023, so this will be an area to address by her new coaches.

For Persico, her data is somewhere between Labous and Realini. There are some attempts to go with moves and push the watts to keep up but the final third is a very good smooth effort with a little kick sprint at the end against Clara Koppenburg and Cecilie Uttrup Ludwig. Again no recorded weight but an average of 251w against a normalised power of 253w is a consistent effort.

What we see in Persico’s cadence is that she tries to keep the cadence high for the first half but as she tires, the cadence begins to drop a bit. That’s a sign of a rider pushing a harder gear but given she got really smooth power figures from it, that’s probably her natural rhythm.

Bradbury was the youthful revelation of this year’s Giro Donne. Finishing in the top 10 and the highest Canyon SRAM rider. The young Aussie was 13th on the Passo Maniva and she was another rider who has spiky power lines whilst trying to remain with the lead group. Particularly early on she tries to go with the moves and then sits at a power about 20 watts higher than what she averages near the end.

Her weight is recorded and at 4.9 w/kg Neve Bradbury isn’t too far behind the effort that Juliette Labous did. The difference comes from Labous being able to do solely her effort whereas Bradbury had to ride with others and respond to their moves. That’s visible in the heart rate which jumps higher above average the most out of these riders. There is definitely more to come from Bradbury but she has made an impression at the 2022 Giro Donne.