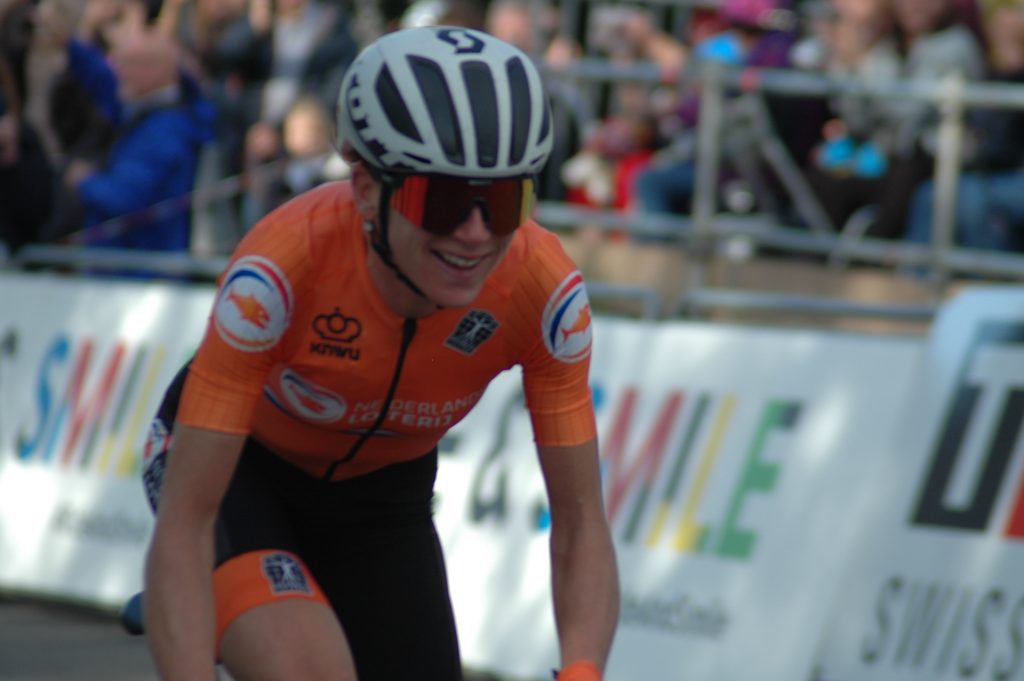 Annemiek van Vleuten’s career has 3 main periods in it, just like Marta Bastianelli. That middle period though is very very different for Van Vleuten. There’s the early promise period, the solid consistent middle and then her current period of greatness.

After finishing 14th Overall in the 2008 Boels Ladies Tour whilst racing as an amateur for Vrienden van het Platteland, Annemiek Van Vleuten turned pro in 2009. She began racing for the DSB Bank–LTO team, that can trace its roots through Rabobank to the current CCC-Liv team. She stayed there for the 2009, 2010 and 2011 seasons. Her 2009 season quietly hinted at her potential, she improved to 10th Overall in the Boels Ladies Tour.

The following year she achieved her breakout Classics result with 2nd in the Ronde van Drenthe. Sprinting from a reduced bunch after teammate Loes Gunnewijk won with a late solo attack. She also finished 10th in the Tour of Flanders and 12th in Flèche Wallonne. The standout result though was winning the Route de France. She didn’t finish any lower than 9th on any stage and finished ahead of the likes of Lizzie Deignan, Marianne Vos and Sara Mustonen.

2011 saw Annemiek van Vleuten take her first major Classics victory. She took the win in the Tour of Flanders. She responded to the late attack by Tatiana Antoshina before countering and taking the sprint 10 seconds ahead of the peloton. She was consistently good in the rest of the Classics season. Finishes of 6th in Omloop Nieuwsblad, Ronde van Drenthe and Flèche Wallonne were topped by a 3rd place in lfredo Binda. She also won the GP de Plouay to seal a year where she won the World Cup for strongest rider across the season.

A reduced Classics season in 2012 meant less results in those races that season. She finished 2nd Overall in the GP Elsy Jacobs and 3rd Overall in the Emakumeen Bira however. Smaller races like GP Stad Roeselare and 7-Dorpenomloop Aalburg were won but the highlight of the season was becoming Dutch National Champion for the first time. She beat Marianne Vos by 3 seconds and everyone else was at last 3:45 behind. She helped Vos take Olympic gold in return, finishing in the main peloton in 14th place.

The period between 2013 and the 2016 Olympics can be summed up as consistent. Van Vleuten was a top-10 finisher in almost all of the Classics races she entered. She was 2nd in the 2015 Flèche Wallonne but often found herself in the lower top-10 places. She beat the emerging Anna van der Breggen to win the 2014 Belgium Ladies Tour and repeated her win in 2016, finishing 1 minute ahead of Marianne Vos. She became National Time Trial champion for the first time in 2014 and also repeated that win in 2016. It was the Olympics road race that changed things though.

With 10km left to race, Annemiek van Vleuten was ahead of the peloton having dropped Mara Abbott on the final descent. Unfortunately, she then crashed, suffering a concussion and 3 fractures to her spine. If she’d managed to descend without crashing, she was nailed on to become the Olympic champion. Van Vleuten credits the training she put in for this race to her development into the current best climber in the peloton.

The following season, Van Vleuten won the Cadel Evans Great Ocean Road Race, the National TT Championships, 2 stages of the Giro Rosa, La Course by Tour de France, the Boels Ladies Tour and the World TT Championships. With Van der Breggen at the peak of her powers, the racing was epic as they shared out most of the biggest wins. Van Vleuten was 2nd in Emakumeen Bira and 3rd in each of the Giro Rosa (but won the points and mountains jerseys), Omloop Nieuwsblad and Amstel Gold too.

In 2018, Van Vleuten won her first Giro Rosa and another La Course to add to her collection. She also retained the World TT Champions jersey. She was runner-up in the Emakumeen Bira again, this time to Amanda Spratt. She continued to be excellent in the Classics, finishing 3rd in the Tour of Flanders and Liège Bastogne Liège, and 4th in Flèche Wallonne. That consistency saw Van Vleuten win the World Tour (World Cup) title for the second time. She crashed in the World Championships road race and fractured her knee cap, casting doubts on her form going into 2019.

2019 was arguably Van Vleuten’s best year yet. It was topped off by the legendary 100km solo attack at the World Championships in Yorkshire. By then she’d already retained her Giro Rosa title, won Strade Bianche for the first time and also Liège Bastogne Liège too. She had plenty of near-misses too, finishing 2nd in all of the Tour of Flanders, Amstel Gold and Flèche Wallonne. Each of those races had a different winner, showing the current depth in the strength of the women’s peloton.

Despite the name, the women raced from Bastogne to Liège. The finish line matched the men’s so gone was the old uphill drag in Ans and ins a flatter run into Liège itself.

There was no early break but later on Maria Novolodskaya and Leah Kirchmann managed to escape on the Côte de Brume. They gained 90 seconds at the biggest gap but were nearly brought back heading into the infamous Côte de la Redoute. Annemiek Van Vleuten attacked and gained a gap of 25 seconds over Van der Breggen and Longo Borghini who tried to chase.

They got pulled back into a group of around 15 riders who never worked cohesively enough to pull back Van Vleuten. Lizzie Deignan attacked and gained 10 seconds on the chasers but never closed the gap ahead to less than 45 seconds. On the Côte de Roche-aux-Faucons, Longo Borghini and Annika Langvad managed to catch up with Deignan. They found themselves with 30 seconds over the chasing group but were now 1 minutes 20 seconds down on Van Vleuten.

Van Vleuten continued to power on and increased her gap to 2 minutes, victory in the rain now certain. The smaller group behind were swallowed up by the larger group as they reached Liège. Floortje Mackaij counter-attacked, with the surprise attack giving her enough of a lead to stay away for 2nd place. Just 4 seconds behind her, Demi Vollering won the sprint for 3rd place on the podium.

The 2019 Liège Bastogne Liège gave us a sneak preview into the epic World Championships ride Van Vleuten would do later in the year.